Current gain characteristics versus Collector Emitter voltage. Where is the transistor saturated? Can a transistor be saturated with a VCE of -10V?

I'm fairly new to transistor usage and determining stages of operation for a BJT. However, from what I've learned, in order for a BJT to be saturated, both junctions need to be forward biased, and that in saturation, an increase in base current does not equal an increase in collector current.

However, looking at this particular datasheet, and specifically this graph, they have current gain versus different collector-emitter voltages.

Help greatly appreciated! Been bothering me all day.

It looks as though you haven't received a direct answer to your questions. There are a number of question/answer cases on this site to examine. But I'll just drirectly answer, instead.

What is important to note that in all three cases here, is the magnitude of all of these values: \$\mid V_{CE}\mid\quad\ge\: 1.0\:\textrm{V}\$. This means, by definition, that the transistor is not in saturation.

If it isn't clear to you why this is, then please think very closely about this. Suppose you have a forward-biased \$V_{BE}\$ junction. But also suppose that the \$V_{BC}\$ junction is not forward-biased. (So that there is little to no current due to it being forward-biased.) Then it must be the case that the collector is further away from the emitter than the base is, right? Has to be. By itself, this says that \$\mid V_{CE}\mid\quad\ge\: 0.7\:\textrm{V}\$. And this is what is meant when someone says that a BJT is in its active region and not in saturation. Saturation just starts right at the moment when \$\mid\: V_{CE}\mid\:\lt\: \mid V_{BE}\:\mid\$ and therefore the \$V_{BC}\$ junction is moving into forward-biased mode. The saturation starts out very shallow, because the forward biased BC junction only adds very, very tiny currents. When still very shallow, the value of \$\beta\$ isn't badly impaired. But as the collector gets closer and closer to the emitter, these currents rapidly increase and the transistor is soon into deep saturation where the \$\beta\$ is quite poor.

So, the curve you show is everything about active mode and nothing at all about saturation. All of the curves are everywhere just active mode curves. The decline that you see taking place is happening for other reasons (current crowding, for example), but not because of saturation. Also, you'll notice that the \$\beta\$ is declining "sooner" when the magnitude of \$V_{CE}\$ is smaller. (This can be a reason why you want to operate a BJT with more \$V_{CE}\$, than less. But that's another story for later.)

Because saturation is a matter of "designer choice" and not so much a matter of the device itself (though, yes, the device does impact that choice), the datasheet folks will usually provide a couple of different graphs. 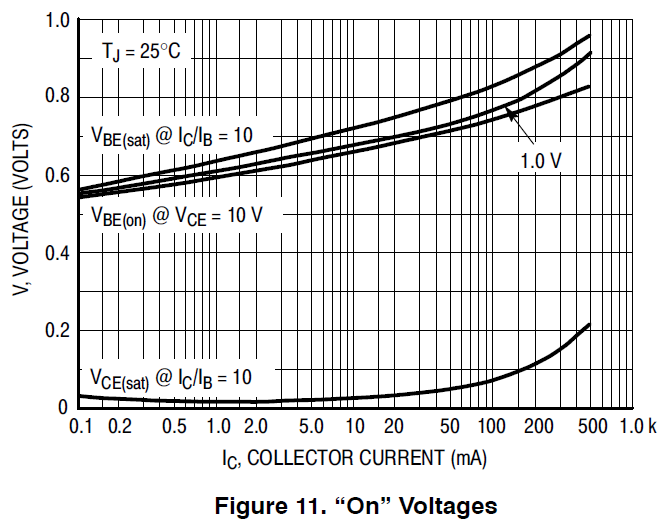 That's a big clue about what they consider to be a possible saturation value for \$\beta\$ (10.)

Where they provide nice curves that show saturation "occurring." This curve actually shows you a lot more useful information about the saturation process for the BJT, at a few of the useful collector current cases. You can extract some representative saturation \$\beta\$ values by looking over these curves.

Here is the collector characteristics for a bipolar 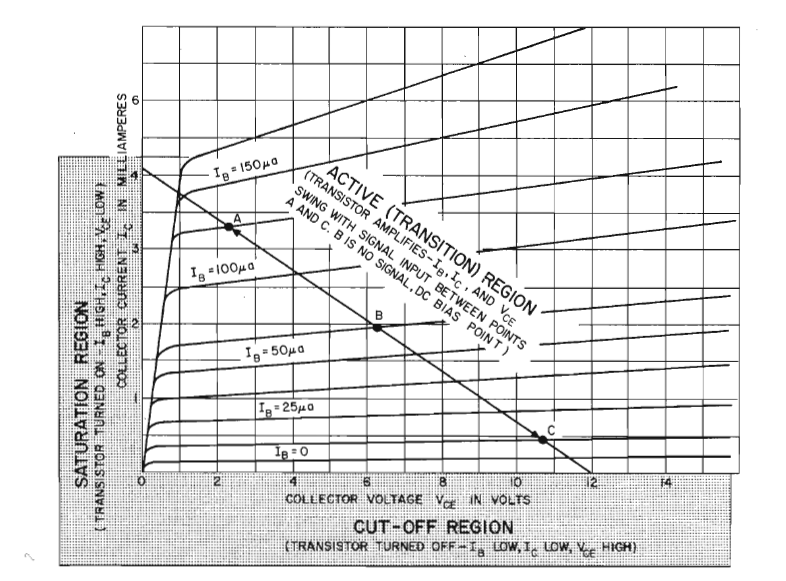 Not the answer you're looking for? Browse other questions tagged bjt pnp saturation or ask your own question.

2
Bipolar transistor as a switch
2
How can I calculate the base current of a transistor to get a specific emitter-collector voltage?
2
How does the current flow through the collector-base junction of an NPN transistor operating in saturation?
3
Terminology for BJT “regions of operation”
7
A question about Vce of an NPN BJT in saturation region
4
Reading BJT Transistor Datasheets. Two different values for collector emitter voltage?
0
Collector current decreases with the increase of base current in saturation mode of bjt
0
BJT working in saturation mode
1
Why does the Collector-Base Junction need a lower magnitude voltage to be forward biased compared to the the Emitter-Base Junction?