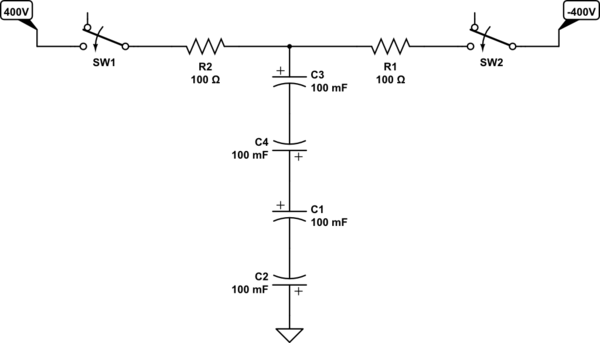 It is known that we can use series capacitors to increase rated voltage. But I want to know how far we can push this feature to? Suppose, each of this capacitors are identical, 200V rated and polarized. We also know that polarized capacitors can be turned into nonpolarized by connecting their negative terminals as in the scheme above.

So, in the circuit above, can I safely say that I have formed a 25 mF - 400V rated capacitor? If I charge them up to 400V, then discharge them down to -400V, should I be expecting some problems? I suspect, over time the voltage of each capacitors will be varied and after a some point, one or two of the capacitors will be holding more than 200V (or be holding negative voltage) and blow up. If so, is there a way to prevent that and safely form a higher voltage rated, non polarized capacitors by polarized capacitors?

edit: I editted the question to be more clear. Two series polarized caps forming a nonpolarized cap has the same rated voltage.

edit2: I'm editting the question just to address the diferences between this other question on stack. Firstly, the questions are entirely different. In my question, I am aware of that we can form a non polarized capacitor out of two polarized capacitors. Secondly, I am asking for a safe design guide. I provided a schematic to demonstrate my particular problem.

I think the question is, how can it be guaranteed that the +/- 400 V is properly distributed between all capacitors.

Now your case adds that also the voltage must be shared. So 400 V is shared equally between two 200 V capacitors. Both should be charged equally so that no voltage difference will occur.

In theory that could work as the capacitors will behave in an identical way, they have exactly the same capacitance etc.

However in the real world no two capacitors are exactly the same. Also the behavior of a capacitor will change over time. If one capacitor has slightly less capacitance, it will be charged to more than 200 V. Suppose that slight overvoltage causes more aging and loss of capacitance. Then this difference would get progressively worse over time.

I would not rely on these capacitors to "sort themselves out". I would add balancing resistors and perhaps even diodes (protecting the reverse biased capacitors) so that the effect of mismatched capacitors is minimized. 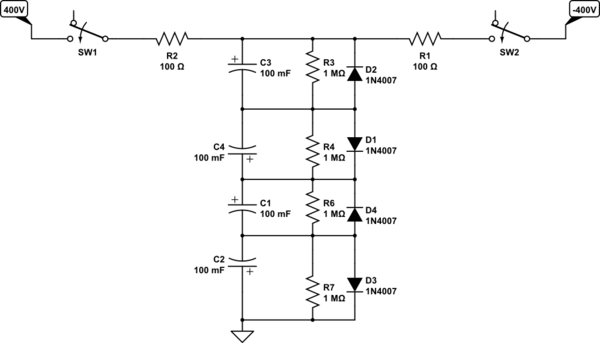 Reverse voltage detoriates the insulation. It is easy to hope that it will be fixed soon when the right polarity is returned. I do not believe it until I can read it from the datasheet. Your system can have long time reversed states. The reverse voltage can do its work undisturbed.

The type of capacitor would be critically important when considering the value of resistors in the circuit provided by Bimpelrekkie.

For the older technology electrolytics, these were notoriously leaky, and the leagage value varied in the capacitor even when "good". And especially at the voltages proposed, for this older technology, about 450VDC was always the upper limit for continuous voltage across one (and such a capacitor would have been rated at 450VDC). They could usually take a peak of a fraction over 500VDC but above that you would expect a spectacular blow-up. These electrolytics also relied on a very thin layer of insulation as the dielectric, coated by chemical action on to thin aluminium by an electrolyte soaked into absorbant material. The aluminium was one capacitor plate, and the electrolyte was the other "plate".

On that basis, even given the above circuit which certainly includes safety features, I personally would expect a spectacular "blow-up" of one or more capacitors - and quite soon. I would not use such a circuit in anything I designed, for I would never be able to trust it in a real-world operating situation. To try and make things a bit more reliable though, I would reduce the equalizing resistors to 100k each and this would make a better job of "combatting" the changeable and sometimes "low-ish" internal resistances of each electrolytic.

It does strike me that the only practical intention for either circuit above, is to "form" the dielectric in each capacitor by feeding the high voltage through a current-limiting resistor (the 100 ohm ones). The dielectric is formed by electrolytic action inside the internally damp capacitor forming the insulating layer on the aluminium plate.

I did see a specification, source forgotten, many years ago which gave a typical tolerance for the capacitance of electrolytics as being from up to -50% to + 100% (I concede they were probably "making a point") in spite of the + or - 20% that manufacturers stamped on the devices.

Combined with their leakiness, my strong advice for what you want to do with these electrolytic capacitors is, "DON'T do it, you will never be able to trust it for a minute".

If they "work" once formed by the above circuit, the capacity will drift all over the place, so no good for L/C or R/C filters, and besides, traditional electrolytics are no good for high frequency response, although perhaps I'm talking of them being worthless for filters at frequencies maybe over 100kHz, from memory. Besides, by their very nature they have a poor ESR (effective series resistance) even, again, when "good".

If you have the space, use a high voltage "oiled-paper" capacitor. Physically a lot bigger, but highly trustworthy.

Not the answer you're looking for? Browse other questions tagged capacitor analog power-electronics electrolytic-capacitor or ask your own question.