How does the resistor limit the current across the circuit when only one part of the DC current passes through it?

It is clear to me that the resistor represents a physical obstruction to the passing current. I do not know how exactly it works and I will try to show what I was really interested in the diagram.

In addition to this I actually wanted to ask how the resistor limits the current across the circuit when only one part of the DC current passes through it? 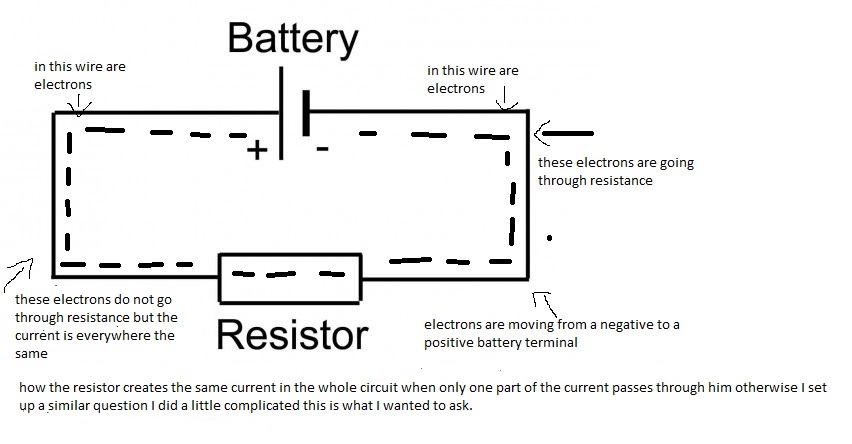 How does the resistor affect the other side of the wire?

How does the resistor limit the current on the other side of the wire when the electrons do not pass through it?

A resistor removes energy from the charge carriers that pass through it. For every unit of charge - in other words, a certain number of electrons* - that passes through the resistor, a certain amount of energy is converted from electrical energy into heat. The amount of energy is proportional to how fast the charge is flowing (the current) and to the resistance of the resistor, so if \$Q\$ is the quantity of charge:

If you consider how much energy is removed per unit time (i.e. power) this becomes

We call the energy per unit charge 'voltage', so going back to the first formula and dividing by the amount of charge gives us

That shows you that if current is flowing along a conductor, and we increase \$R\$ of the conductor - for example by inserting a resistor into the circuit - either \$V\$ must increase (we must give the electrons more energy each, to make up for what is lost in the resistor) or \$I\$ will reduce (the same amount of energy per electron is not able to 'push' them through the circuit's resistance as fast).

(* Charge carriers are of course not exactly the same thing as electrons, but I feel the simplification is allowed for purposes of this explanation.)

A resistor does not directly "reduce current". That is not a good mental model.

A resistor does develop a voltage across it proportional to the current thru it. The proportionality constant is the resistance. That's what Ohm's law is all about. In common units:

Depending on the circuit, the voltage drop across the resistor can reduce the voltage to other parts of the circuit, which in turn can reduce the current that the overall circuit draws. It can therefore appear, sometimes, that a resistor "reduces current". Again, though, this is a bad mental model that will just get you into trouble, and it obscures the real physics.

Electrons are similar enough in movement to water in a pipe to make an analogy.

Current flows as one long chain not as individual electrons.

If you have a chain driven by a pulley and add friction to one point in the chain, the whole chain slows down not just at the point you grab it.

You can also think of it as 10 people in a long line passing buckets that are tied together with rope. If one of the people is old and slow, it does not matter that the other nine are athletes, the buckets can only go as fast as the old guy can manage.

You need to remember two bits of basic electrostatics:

And both of these effects are very strong. Therefore conductors tend to bring the numbers of electrons vs protons into balance very quickly, and distribute them as evenly as possible along the conductor.

So electrons cannot "move immediately to the battery": that would create a charge imbalance. Electrons behave like a bicycle chain in a circuit. All the chain has to move at the same speed, it can't pile up or stretch out. But when you apply a force to one part of the chain, it is transmitted to the whole chain.

Think of it this way. For potential difference to exist between two points there has to be some electric field between them. So consider the circuit you have shown in the question.
Suppose you connect your battery at t=0, the wires have ideally zero resistance and there is no potential drop across the wires, this is another way of saying that they require very little electric field to drive the electrons across them. So as soon as you connect the battery, the electrons start to drift away from the negative terminal and those on the other side of the wire will start to move towards the positive terminal.
So far so good but how do we have a potential difference between the ends of the resistor? That simply means we have to have a "strong" field, where strong is relative to field inside wires (which is ideally zero as explained). Where would this field come from? And the answer is from the electrons themselves.
So as electrons start to drift away from the negative terminal of the battery they would reach the resistor connected at the end of the wire. But resistor has a lot of atoms which are vibrating (thermal energy) which collide with the incoming electrons and sort of block them from moving across itself. As a result, the electrons start to accumulate near the resistor end connected to the negative terminal of the battery. Same thing happens at the other end at the positive terminal where electrons are moving into the battery leaving positive charge at the other end of the resistor.
Thus we have a positive charge and negative charge accumulate across the ends of the resistor, it result into the "Electric Field" we were looking for. The charges will accumulate until the Electric field is strong enough to move the electrons from one end of the resistor to the other and the accumulation will stop at that point.
The amount of electric field depends on the type of material of the resistor, in fact it depends on its resistivity, which you might know are related as:$$E = \rho j$$

I find it easier not to drop too deeply into the physics....

Like someone else said, electrons flowing around a circuit are not unlike water molecules flowing through a pipe.

Voltage is a lot like pressure. Imagine a bucket of water with a hose coming out of it that hangs 1 meter high. There is a pressure, that is just determined by the height. If we measure it really near the ground - even if the hose is clamped off - it is simply a number (that is just the density times the height).

Now, if the hose is a 1 inch diameter hose, and we release the clamp, water will flow to ground from the bucket through it at some rate. The hose has some 'resistance' (friction), and for a give pressure a fixed rate of water (a current, measured in molecules per second) will drain per second.

Now imagine pinching the hose. The pressure is the same, but there is more resistance: thus, there is less flow per second.

Electricity is pretty similar. Electrically, pressure is 'voltage' and flow is 'current' - just like the current in a river (which is where the term comes from). Current is the number of electrons per second, if you will, that go through the hose (or 'circuit'). SO, for a given pressure, with less resistance there is more current.

All of the electrons that flow must flow through the resistor, just like all the water that flows must flow through the hose - whether wide-open or pinched. But when we talk about current we care about the flow rate. There isn't a set of molecules (or electrons) on one side and a set on the other. Yes, at any instant there is, just like at any instant some of the water molecules are in the bucket, some above the pinch in the hose, and some on the ground that have already flowed. But we are interested in flow rates (electrons per second), not a snapshot.

It is actually easier, I find, to think of it like circuit designers do: there is a supply voltage, and a ground where all the electricity wants to go, just as all water wants to flow downhill, and stuff in-between. (Warning: usually, we call that voltage positive, so to be accurate electrons are flowing backwards - but that is just a convention.)

Now ask yourself the same questions you had asked. The voltage (pressure) is what it is. The resistance is what it is (call it R). By definition, the amount of electrons that can flow through the resistor to ground per second (the current, I) for a fixed pressure (the voltage, E) is related by a very simply formula:

Where you are getting confused is imagining electrons are getting stuck in the resistor, or leaking out of it. But, if we pinch off a hose no water gets stuck or leaks at the pinch: every molecule eventually goes through; the rate it happens at just gets slowed down by more resistance.

2
How do electrons carry energy

110
Why does a resistor need to be on the anode of an LED?
3
How does the pull down resistor work in this circuit?
2
What is the current before arriving a resistor and after leaving it in the wire?
1
Current split between resistor and capacitor in parallel
1
In a DC circuit with one battery and one resistor, why does the voltage drop remain the same irrespective of the value of the resistor?
2
Why do electrons move as if on conveyor belt in a circuit?
0
Voltage across different resistors in a series circuit containing just voltage source, resistor and ground measures the same
1
Why does the current enter the negative terminal of this element and it is still absorbing power?