Why do Class AB amplifiers use a pair of diodes instead of a resistor?

I understand that in a Class AB amplifier, a pair of diodes are placed between the bases of the two transistors to slightly forward bias both bases.

Why are diodes typically used to provide the forward bias instead of a single resistor providing a voltage drop of 1.2V? (Is it because changes in temperature will affect the forward bias of the transistors and the diodes in roughly the same way?)

The answer is that it varies with the needs for the design. You can use resistors to bias an AB class amplifier (just look for Class AB on Google images to see a huge variation in designs), though typically you will see some other schema for setting the bias current through the output pair, or a constant current drive for the bases.

A lot depends on whether you are setting very low class A capability or not. When using two diodes to bias the output pair you are operating very close to Class B only.

In the schematic below it shows both low and high A bias: 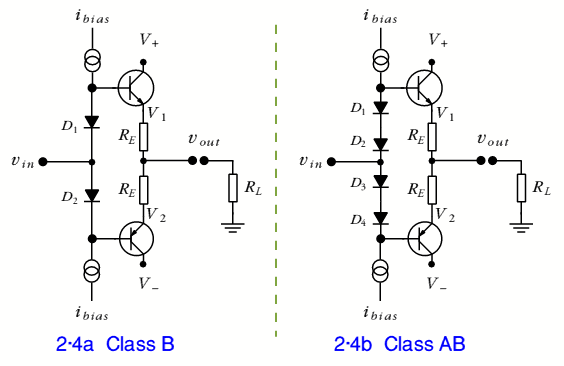 What you describe with two diodes (which have Vf close to the Vbe of the output pair) are operating at very low Class A current. Typically you might see this in a 5-10 W or so amplifier. Operation in Class A (linear) may only be 200-300 mW. These amplifiers turn up in battery powered products a lot since they have low bias current

In the second circuit there are 4 diodes, and you'll see this commonly in high power (50-100 W) mains driven amplifiers. Here the linear operation may cover 5 W or more. This is done so that when you plug in a headset you typically only use the output as a Class A stage with very low distortion.

The two diode bias obviously tracks better thermally than the four diode amplifier, but the larger amplifier is more capable and the output stage has larger heatsinks.

In terms of understanding this type of amplifier you can do no better than read the Linsley amplifier design, done before the days of FETs.
Equally great reading is Blomleys 'New Approach' design. These guys were at the forefront of amplifier design in the 70's, but FET based designs changed it all.

The base-emitter junction in the BJT is a diode, and preferably the diodes you are talking about should be chosen so that they perform as close as possible similarly as the base-emitter diodes.

Near the zero cross-over region, when the input signal is near zero volts, due to the diodes both transistors are quite close to starting to conduct instead of 0.7 volts away from that point. This way there are no dramatic transients required in the feedback signal.

How does one achieve "tight thermal coupling", so the diodes track the transistor temperature?

You cannot achieve tight thermal coupling, unless the diode and the transistor share the same silicon die, and the diode is interdigitated into the transistor's emitter stripes.

On the same silicon die, with 1cm spacing, the tau is 1.14 seconds; at 1mm spacing (0.04 inches), the tau is 11.4 milliSeconds, thus some of the bass tones are tracked. At 0.1mm (100 micron, or 4 mils or 0.004"), the tau is 114 microseconds, thus tones up to 1KHz are well coupled. By the way, no one is going to include a 1cm open region between the hot transistor and the diode; they will fill in that region with useful components. However, I've seen large die with hundreds of microns of distance between the hot transistor and the sensor, with the design-team wondering why the overtemp protection does not protect. Simple: there is a big delay, and the hot device simply gets melted long before the shutoff can start.

One may ask a different question: what kind of coupling is needed? to track the realtime thermal transients during the music? or to track the longer term changes in the heatsink temperature, as the power amplifier heats up or the entire room changes temperature.

Not the answer you're looking for? Browse other questions tagged transistors amplifier diodes or ask your own question.

8
Why would an IR remote circuit use one resistor/transistor pair for each LED?
8
How do diodes and capacitors reduce Crossover distortion?
7
Push-pull power amplifier on complementary darlingtons
0
Low cost power supply redundancy
6
Confusion between Class B and Class AB Amplifier
1
Why does voltage stay the same regardless of resistor connect to the source
4
Understanding Operational Transconductance Amplifiers
4
How does a common-emitter rail-to-rail opamp output stage work? Is there a discrete example?
2
Why are there three transistor pairs in a class B power amplifier circuit?
5
Voltage drop across opposite diodes in series