I have recently acquired a 3D printer and have been experiencing all kinds of trouble with the fans used to cool the printer head, the parts and the controller board.

The controller is a smoothie-compatible custom board with a 24V PSU.

Some fans simply won't spin, some will spin only reluctantly ("wobbling" between two speeds for certain command values, spinning only when commanded at 75% or above), and all are far noisier when used in the printer than when plugged into a 12V PSU.

All this leads me to think these fans are rated for 12V and used with a pulsed 24V power supply.

I could not get the customer support to tell me the voltage these fans are supposed to be rated for. The fans have no label or visible identification. I finally sacrificed the one that would not spin anyway to try and get a clue about its rated voltage, but even the Hall sensor chip has no marking : 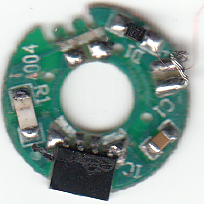 My knowledge of electronics is sketchy at best, I have nothing but a basic multimeter at hand and don't intend to buy an oscilloscope just to debug this pesky fan problem, but still I would be glad to understand what is happening there.

As far as I understand it, the controller board uses a PWM signal to achieve variable speed for the fans. The PWMs are generated using a sigma-delta algorithm with a 1ms base period. It means the fan power suppply is a 24v signal consisting of 1ms power pulses followed by the necessary number of 1ms no-power cycles to achieve an average power-up time matching the set value.

For some reason they added a 22µF capacitor between ground and the fan control signal (in the fan connectors located on the printer head), so I suppose the PWM must be somewhat smoothed.

According to the controller configuration, the PWM is limited to the 0-50% range, meaning the "average" voltage fed to a given fan never exceeds 12V (in reality, 1ms 24V pulses followed by 1ms power off, possibly smoothed by the capacitor).

Aapparently the smoothie designers explicitely warn about using 12V-rated fans on a 24V PSU, even using the PWM limitation trick to reduce the "average" voltage to 12V or less.

I've been scouring the Internet to try and understand what consequences overvolting these fans could have (on the fans themselves and possibly on the power supply), but my electronics skills are not sufficient to figure that out by myself.

So my questions are :

To answer your questions, these are my suspicions based on your observations: The symptoms you observe are very likely an attempt to provide "12V" to 12V fans, from a 24V supply. Such a theoretical attempt to provide 12V with high efficiency from a 24V supply probably deserves full marks for trying, but the designer IMHO perhaps did not think his or her way through all of the connotations of using mass-produced 12V fans. The only purpose I can think of for the 22uF capacitor is that it should be "pumped" by the 24V pulses so that it hovers around an average of 12V while being constantly bled by a theoretical, perfect, constant current draw which would be identical for all of the millions of 12V fans pouring off the fan-makers' assembly lines (real-world manufacturers will see the problem already).

Where the "12V" PWM circuit fails in practice, it has occurred (these are still my suspicions) from assuming an absolute belief in the supplied specifications of the ideal 12V fan from the fan manufacturers, and designing the efficient PWM supply accordingly, the faith in the specifications apparently leading to a prototype "12V" PSU design which is (and here is where we can all be sure) failing due to the simplistic PWM design.

Only ONE ideal fan with its constant, steady current, will discharge the 22uF capacitor just enough to keep it at a "ripply" charge state of approx.12V

Practical fans pouring off a mass-production assembly line, I don't believe for a minute are tested for extremely tight spec of constancy of current draw. That would never be conceived of as their prime requirement for their use.(my apologies, I am being wise after the event).

Thus my hypothesis for the natures of the observed failures in this case.

Now three suggested answers to the question: 1- If the fans as dismantled are modifiable to run on their originally rated 12V, then do so and put a 12V regulator in the 24V feedline to them. Use a series resistor with the regulator if necessary to keep the regulator within thermal spec. 2- You bought a 3D printer. Just a tiny fraction of a percent more cost at the local electronics shop will buy you a 12VDC supply to run all three fans. Wiring them in will be a breeze compared to what you have done already. 3- buy 24V fans as you suggest. Quick, simple, elegant. I would do that.

I am unable to answer most of your questions but would point out that 50% duty cycle on 24 V supply will not result in 12 V average. We need to calculate the true RMS values of voltage and current.

The 12V fans are brushless and have fragile SMD electronic components on a PCB.Consider the peak voltages of your proposed 24V 50% duty cycle scheme .25 years ago I experimented with running a 12V fan on halfwave rectified 24VAC from a 50HZ transformer winding .The fan ran for about 2 minutes and then expired ingloriously with a small puff of smoke .Fan teardown revealed burnt PCB.I always feed DC brushless fans with nice pure DC from a buck converter which gives the option of easily changing fan speed if needed .

It's been an interesting discussion, and now, to help with answering the questions, It really is time to use an oscilloscope (I know you have not got one, but...) and begin some diagnostic checks of the smoothie controller board, the feed between the microcontroller and the power transistor gate/base, the input and output of the power transistor (checking with the oscilloscope, not your multimeter) and checking what is happening to the waveform and absolute voltage at their peaks, at the fan motors.

You will be wanting to know if the mark/space ratio, or duty cycle (however you want to name it) of the microcontroller output is being reflected in the actions at the output of the power transistor, and thence eventually to the fans.

You have been given plenty of information to work through from all of the valued contributors who have helped here with your problem, and yet there are still too many unknowns to give accurate answers to all of your questions, now that I have had a bit more time to think my way through it all.

And you will be doing those diagnostic checks so you can come back here and provide more background information to the questions you have asked. Good luck.

2
Is over-voltaging a DC fan, and then reducing speed with PWM a bad idea?

0
Use motherboard PWM to control non-PWM fans with MOSFET
5
Can PWM affect a brushless DC fan given sufficient time?
1
Running a 12V PWM Water pump on a 5V fan output with tacho input
1
12V PWM to Analog DC converter for car cooling fan
2
Is over-voltaging a DC fan, and then reducing speed with PWM a bad idea?
1
How to use the "Function type" fans
2
Fans in series vs parallel
1
Why does a 12V, 0.5 amp fan work in a PSU but a 12V, 0.125A does not? (Both are three wire fans)