MPU6050 accel/gyro noise that behaves strangely - what might be doing this?

I'm experimenting with an MPU6050 six-axis accelerometer/gyro reading data with a Raspberry Pi via I2C. The six-axis response makes sense in general as I rotate it by hand, rotating moves the gravity vector correctly per the accelerometer channels, and short rotations around each axis generate reasonable-looking gyroscope values.

But when I set it down on something that should isolate it from vibrations and just take data for a long time, I see strange non-statistical noise in some channels.

I wrote a short script (shown below) that samples all six channels for 400 iterations, then increments the low pass filter (seven levels from 0x00 to 0x06) and then increments the gain for both accel and gyro (four levels; 0x00, 0x08, 0x10, 0x18). So that's 28 tests with 400 samples each. The data rate is about 55 to 60 measurements of all six axes per second. The characteristic frequency for each setting of the digital low-pass filter from the register map pdf is:

and the data sheet pdf.

Below I show the data which ranges from -/+ 32,767. The only thing I've changed is to subtract the mean of the 400 measurements at each setting so just the noise is displayed.

As the seven low-pass filter settings increase, the frequency decreases and the noise decreases as expected. However, there are these sudden spikes of +/- 200 to 300 ADC counts. They are not exactly 256, but in that ballpark with seems slightly suspicious.

I also show the raw data and standard deviations per test in the second plot.

Question: Does this kind of behavior - this non-statistical, spiky noise - look familliar to anyone? I'm waiting on a second gyro to compare, but that will take many days, and I'd like to see if there is anything I can do in the mean time. Each of the six channels has a very different behavior wrt noise. Inside the IC there are six separate MEMs devices each connected to its own dedicated ADC. 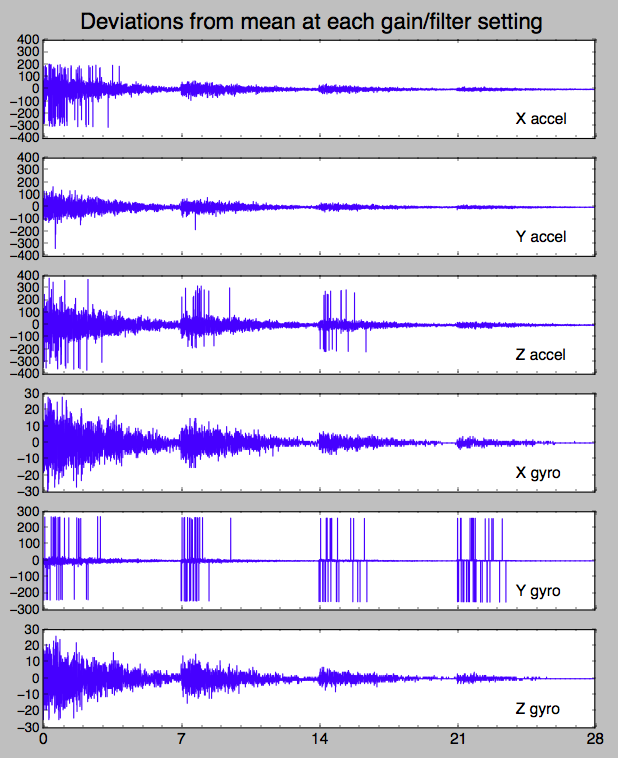 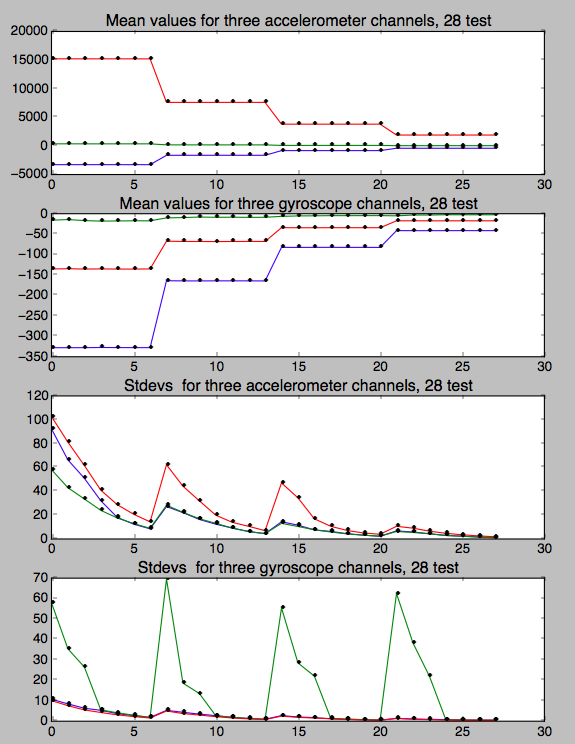 Script for the Raspberry Pi to read the module via I2C:

This suggests some kind of synchronising error - such as reading the LSByte of one sample and the MSByte of the next or vice versa. How does your gyro handle this, is there some way to temporarily put it on hold while you read data?

Also, examine the raw data around a few of these errors to see if it happens when a slowly drifting signal crosses an MSByte boundary. Obviously, focus on the Y Gyro, the errors are most clearly separated from the noise.

@BrianDrummong identified the source of the apparent noise in the accepted answer. Reading one byte at a time over I2C resulted in asynchronous behavior so that the hi and lo bytes corresponded to different conversions. Using bus.read_i2c_block_data() solved the latching problem. By reading fourteen bytes (seven words) (three accelerometers, temperature, three gyroscopes) as a single I2C instruction, the "noise" has disappeared. 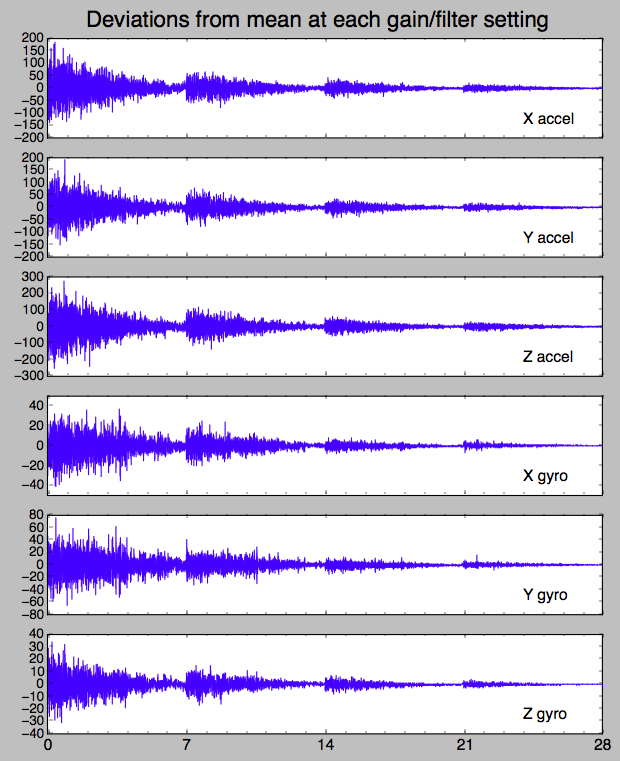 Not the answer you're looking for? Browse other questions tagged noise accelerometer debugging or ask your own question.

0
What might be the cause of noise in my audio out on Stereo when connecting computer as the "audio in"?
1
What might cause coaxial cable noise?
0
LSM6DS33 how to filter accelerometer values even more (< 50Hz)
0
What can be said about the nature of the noise by looking at this spectrum?
1
What is meant by counts of noise in this context?
0
Counter glitching? Instability? Can't get a trigger lock on the scope, what might that be?
3
What does electrical noise that is mitigated by a human hand tell us about the noise itself?