This might be a simple problem, but I simply cannot wrap my head around it; I'm still learning about ideal op-amps and electronics in general. 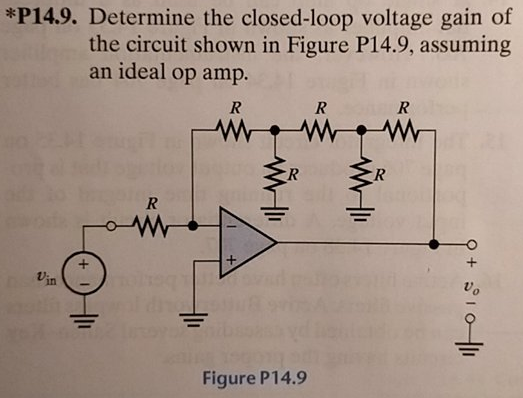 I have tried solving it using the gain formula for an inverting op-amp configuration, which goes "Av = -(Rf/R1)".

I determined an equivalent resistance for the top 5 resistors (R||R + R||R + R = 2R) and divided that by the resistor at the inverted input, which that gave me an answer of -2, where it should be -8, according to my professor's solution.

What the hell am I doing wrong, help is greatly appreciated!

Notice that we have:

KCL for the two nodes:

Plug em into mathematica and you'll get:

Now you know the inverting input is a virtual ground so that source is part of a voltage divider from Vo/2 through (3/2)R to R/2. So the voltage at the resistor to the input is (Vo/2)*R/4, which is Vo/8, so for balance Vo = -Vin*8

For simplifying the two T-networks (replacing it by one single resistor) you have nothing to do than to apply the classical star-to-triangle transformation twice.

Here is what you get after the first star-to-triangle transformation:

That's an inverting amplifier (G = -Rf/Rin) but Rf is composed of 2 T-networks. Simplify the t-networks into a single resistance and divide by the input resistor for the gain.

Not the answer you're looking for? Browse other questions tagged operational-amplifier gain inverting-amplifier or ask your own question.

0
How do I determine the inductance of a circuit using Op-amps, Capacitors and Resistors?
5
dynamic gain control for active noise cancellation circuit
0
Gain-bandwidth product proof for open loop/closed loop opamp
2
SPICE simulation of voltage multiplier using log and antilog amplifier
0
Op Amp Summing Point Problem (Ideal)
2
Op-amps circuit with diodes
2
How does opamp open-loop gain affect closed-loop gain in a circuit?
0
Why does the output of this opamp change my analog signal?