Any transfer function has the same denominator 1+T

Sometime ago, I came across some theory saying that in a control loop any transfer functions such as input/output impedance, voltage gain can be derived from loop gain. Maybe something like any transfer function related to loop gain will have the denominator in the form (1+T) with T is loop gain. However, I couldn't find it now. Hope anyone here can help with some material or name of the theory.

Actually, in a system featuring a unity return as shown below, the perturbation \$u_1\$ is rejected by an amount depending on \$S=\frac{1}{1+T(s)}\$. \$S\$ is the sensitivity function and it shows how robust the system is to incoming perturbations. You can see that if you have a large open-loop gain in dc, for \$s=0\$, then \$S\$ is close to 0 and the rejection is perfect. As the magnitude of \$T\$ reduces when frequency increases and you approach crossover (the 0-dB point), the system is less and less at ease to reject these disturbances. When you pass the 0-dB point, the system runs in open-loop ac-wise and does what it can to react: no gain, no control system. 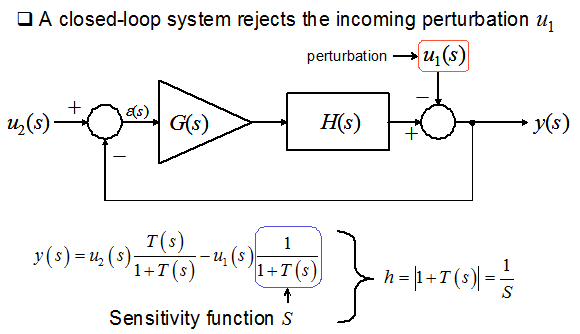 Classical perturbations are the input voltage \$V_{in}\$ and the output current \$I_{out}\$. The rejection of \$V_{in}\$ is called the audio-susceptibility of the considered equipment, also called input line rejection. It is the capability of a converter, for instance, to maintain a perfectly-regulated \$V_{out}\$ despite input voltage variations. If you consider \$A_{S,OL}\$ as the open-loop audio susceptibility of a given control system operated in open-loop, then once you close the loop, the new audio susceptibility becomes: \$A_{S,CL}=\frac{A_{S,OL}}{1+T(s)}\$.

For the output current, the small-signal open-loop output voltage variations are linked to the output impedance: \$\Delta V_{out}=Z_{out,OL}\times \Delta I_{out}\$. When you close the loop, the new output impedance becomes: \$Z_{out,CL}=\frac{Z_{out,OL}}{1+T(s)}\$. You may find more information in this PPT.

Not the answer you're looking for? Browse other questions tagged circuit-design control-system transfer-function loop-gain control-loop or ask your own question.