I am wondering, if the quartz crystal, to be used as part of an oscillator, needs additional components to oscillate at its resonant frequency? And if it does, which are those extra components that help the quartz resonate? I know it doesn't produce any sine wave only by itself.

Also, should the output of the whole oscillator (which is feeding back a part of output signal to the input of quartz) lag for 180° vs it's input, so that quartz crystal actually oscillates? 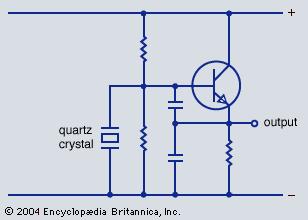 Your circuit is a Colpitt type oscillator in common collector configuration. Please note that a quartz can be (and is in practice) used in four different modes:

In the shown circuit, the quartz is used at a frequency where it works as a high-Q inductor. Thus, together with both capacitots it forms a parallel resonant circuit which has zero phase shift at the resonant frequency wo=1/SQRT(LC) with C=C1C2/(C1+C2).

This allows oscillation at the frequency wo - together with a common-collector stage - because the loop gain has zero phase shift.

Note: The input resistance at the base is negative due to the positive feedback effect of the capacitor between base and emitter.

A Quartz crystal is a Passive device.

You should see it as an almost ideal (very little loss) LC-network.

If you put some energy in that network (the Crystal) it will resonate for a very short time but the signal will die out.

The crystal does need energy to maintain a signal across its terminals as it is not completely lossless. Adding this energy is the function of the circuit, to add small amounts of energy so that the crystal can start to resonate and maintain that resonance.

Also, you want to use the signal, this also costs some energy (to drive the next circuit). Providing this signal is another function of the circuit.

There is a more thorough explanation to be found here

Not the answer you're looking for? Browse other questions tagged rf oscillator feedback amplitude or ask your own question.