I have been developing control software for below given power electronics circuit. 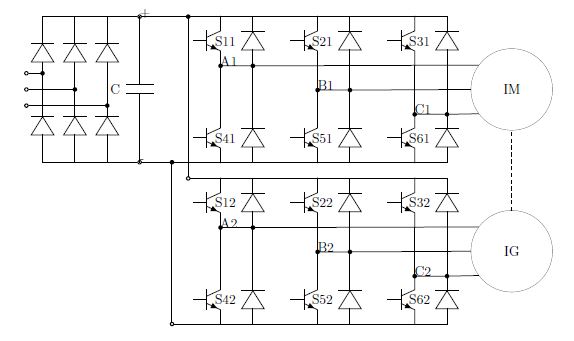 Both inverters are controlled by one microcontroller. The sequencing should be following. At first the precharging step is needed. After that step the average DC link voltage value is 3*sqrt(6)*230/pi V. Then the motor is started with scalar control algorithm in open loop until the prescribed frequency is achieved. After that the second machine should be started.

The second machine should work as an induction generator. So it is necessary to somehow identify the desired stator frequency so that the machine will actually work as a generator (the synchronous speed must be lower than the actual mechanical speed which is prescribed by the motor).

You should really add a diagram. But I think I get the setup. Two induction motors. Each one controlled by an inverter. The two inverters are connected to the same DC link voltage. The motors are mechanically coupled so that they spin at the same shaft speed. So, if you want one of them to act as a generator, the easiest way would probably be to command negative torque in the generator. The other motor would be commanded to operate at a specific speed. I don't think there is any danger of over-driving the DC link, because there is no source of power other than the grid.

I hope you are not thinking of this as some kind of free energy or perpetual motion idea. You probably should explain why you want this arrangement. Maybe there is an easier way.

Both machines can act as well as a motor or a generator. This all depends on their electrical frequency in respect to the common speed. Think of the large inertia of the arrangement to understand you may also have two motors or two generators in some situations.

Not the answer you're looking for? Browse other questions tagged power-electronics control induction-motor or ask your own question.