Does the paint colour matter on a heat sink?

Heat leaves a heat sink via conduction, convection and radiation. I was taught that black surfaces are best at radiating heat and correspondingly a lot of heat sinks are black. But they also have fins for convection. And large heat sinks have lots of large fins. Convection therefore seems important.

So what happens if for aesthetic reasons I have to paint a heat sink brilliant white? White of course is the best colour for reflecting thermal radiation. Would that then reflect the heat back inside like a foil wrapped turkey? Can some one guesstimate a loss of efficiency or a necessary compensatory increase in rating?

P.P.S. What does "material finish" imply in heat-sink terminology? doesn't quite answer it.

Yes black has the highest emissivity (it also absorbs radiation best- reciprocity - or Kirchoff's law of thermal radiation). Note that it has to be "black" at the relevant wavelengths, which do not necessarily correspond to being black in the visible spectrum.

That means that radiative heat transfer will be maximized if the emissivity approaches 1 (black body). If your heat sink "sees" mostly cooler things it will have better cooling, and if it sees hotter things it will not cool as well.

Exceptions exist for those of us designing electronics that has to survive in a vacuum and/or in space or very high altitudes, and if the item being heat sinked (or what it sees) is very hot, radiation can become more important (4th power of temperature).

An example situation where a shiny (low emissivity) heat sink could be superior would be a voltage regulator heatsink in direct view of a heater, incandescent lamp, or vacuum tube.

Any color of dye you like can be applied when anodizing, or none at all, which is called "clear" anodize. Normally the oxidized aluminum (it's not a coating) is a quite thin insulating layer, but in some cases it can be made more than a few mils thick. 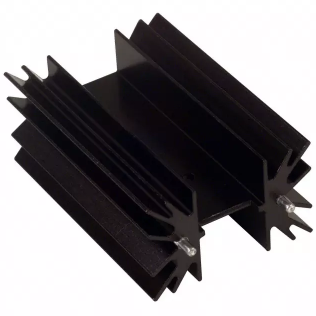 Edit: Let's do a back-of-the envelope calculation to see how significant radiation is. I'll assume a model 530002B02500G heatsink from Aavid Thermalloy. It has a natural convection rating of 2.6 degrees C per watt, which I believe is rated at a rise of 70 degrees C over ambient.

So if your ambient temperature is 25 degrees C and the heat sink is at 95 degrees C the total power dissipated will be 27W.

How much of that is due to radiation? We can treat the heat sink (for radiative coupling purposes only*) as a block of dimensions 64mm x 25mm x 42mm (ignoring the notch) which represents a surface area of 0.011 square meters.

Heat loss due to radiation (assuming emissivity of 1) is

Substituting in the values we get a heat flow of 6.4W due to radiation at 95 degrees C heatsink temperature and 25 degrees C ambient, so less than 25% is due to radiation under optimal conditions for maximizing radiation loss. More likely we've got some forced convection going on and the radiation heat loss is less again. A heat sink that is closer to a cube would have less heat loss due to radiation as well. Not quite low enough to be ignored, but not dominant.

Do not paint heat sinks. The layer of paint will act as an insulator between the metal and the air, reducing its ability to dissipate heat.

Anodizing a heat sink is less of an issue. The anodization layer is much thinner than paint (a few micrometers in aluminum, for instance), so it presents a much lower thermal resistance than paint would.

The color of the paint will not have a significant effect on cooling unless different colors of paint are thinner or thicker than others, or if the heat sink is exposed to direct sunlight.

I used to sell high performance coatings including coatings for thermal management, and this is by no means a simple question. For example one vendor made two coatings that were both a matte black with a recommended dry film thickness of less than two thou and one was designed to be an insulator and the other was designed to be a thermal dissipative coating. Recommended use cases were exhaust headers and brake calipers respectively.

I did have heatsinks coated and did some experimenting and found at low temperature differentials the bare heatsink worked best followed by the insulated one and the radiant coating was worst. At high temperature differentials the emissive coating showed it’s worth outperforming bare metal and the insulative coating also became more effective at slowing heat transfer.

I also played around with other coatings such as conventional paints which were all insulators until they caught on fire, and a thick insulating coating which was the best insulator until it melted.

Conclusion: It depends on your temperature, needed heat transfer and other factors Which coating is the best for your needs, but using a standard paint will never help a heatsink.

Shiny metal surfaces are extremely good at reflecting, extremely poor at emitting radiation. Anything (almost anything) you paint them with will improve heat radiation.

Black-painted surfaces will absorb sunlight better, because most of the energy in sunlight is or around the visible spectrum. But unless your heat sink is so hot that it glows, it won't be emitting much radiation in the visible spectrum, so its color to the eye is completely irrelevant.

Passively ventilated heatsinks that are not enclosed in a reflective container emit a significant amount of radiation. I'm sorry, I don't have the numbers at hand, but it is less than 50%. For parallel fins that are the same colour, radiation is balanced by absorption, so internal fin colour doesn't matter very much, but for exposed surfaces it does matter.

For this reason, you will see that the forced-air heatsinks inside your computer often do not have black anodized pins.

Exposed aluminium heatsinks have to be painted/anodized anyway, to prevent corrosion, otherwise you'll have to include instructions like "not to be used with 1000 yards of the seashore"

The property you are probably looking for is emissivity.

There are 3 main processes through which heat is transferred:

The effectivity of each of these processes depends on the materials in question and the environment temperature. The total heat flow is the sum of the heat flow from each of the processes at the air/heatsink boundary.

The radiative heat flow component is proportional to the emissivity of the surface, the temperature to the fourth, and the effective surface area.

Have a look at this handy list of emissivities at room temperature.

The highest emissivities are found in Ice, Water, Glass, Limestone, and Paint (including white); note that all of those are not black. In fact, it seems like apart from polished metals, all materials have a near-ideal emissivity.

Also, as noted in most other answers, a layer of paint will act as a great insulator (for conduction inside the heatsink).

Some papers, like "heat transfer coefficient of painted films" (1956) find "overall coefficients of heat transfer from pipes coated with paints consisting of linseed oil as the vehicle and titanium dioxide, lamp black, or aluminum, were 4 to 15 per cent higher than the over-all coefficient for bare pipe". TiO2 is apparently best there.

So if you have an iron heatsink (I understand the paper tests on iron pipe), paint might even COOL the heatsink, if applied in a good way such that you get reduced oxide layers and a thin paint layer. Extrapolating, if your heatsink would have or develop an isolating oxidation layer over time, painting it is good.

For aluminum, there is oxide, but the oxide layer is only 4nm and also Al2O3 is not a serious thermal isolator. So in that paint is not needed for keeping the oxides away. Additional paint will then only decrease the cooling efficiency

If you really need to paint it, make sure the paint gives minimal thermal isolation and apply a thin layer.

Here are some rules of thumb, with ballpark figures.

Painting an extruded aluminium heatsink will increase its coefficient of emissivity from .09 to about .94. At the temperatures we are talking about, colour doesn't matter at all. What counts is the dullness of the surface. The thickness of the paint layer affects both radiation and conduction.

Paint is less conductive than metal, so do not paint your heatsink unless radiation dissipates a significant proportion of the heat generated by the source. This is likely only under conditions of natural convection. If there is a fan on the heatsink, don't paint it.

The hotter a surface is compared to its surroundings, the more heat will be radiated rather than lost to convection.

An LED panel operating at 60 Celsius with a bare aluminium top surface open to the air will radiate about 10% of the heat generated by the LEDS. This could increase to 50% if the surface is painted, almost doubling the amount of power you can put through the panel.

I have made a spreadsheet that performs some approximate calculations for flat horizontal surfaces: https://smokedprojects.blogspot.com/2021/06/dont-believe-hype-led-panels-run-hot.html

It depends on thermal conductivity and radiation of paint...

If you got paint that radiates well you can mix some grains in it to increase surface area... Some big metal sawdust from aluminium would do the job...

If you uses fan to blow your heat sink, the color doesn't really matter much.

" I was taught that black surfaces are best at radiating heat "

That is not correct. A black object absorbs a broader spectrum of radiation than a colored body, but color in and of itself has no effect on the efficiency of a radiator. Many heatsinks are black because black anodizing is a low cost process that prevents oxidation and corrosion. BTW, it also is an insulator, so if it is important that a transistor be in electrical contact with its heatsink, you can't count on physical contact alone.

A black surface both absorbs and emits better than an equivalent white surface. The best colour choice depends on the environment surrounding the heatsink. If in a cold dark environment then use a black heatsink. If the device is ever expected to encounter a bright environment or radiant heat, use a white heatsink.

This heatsink calculator* ought to not be made use of in circumstances where the warm resource is much smaller sized than the base of the heatsink. The concentration of the warm resource over an area a lot smaller than the warm sink base is not taken into consideration in this calculator.

[*I am involved with the company that provides this calculator]

2
What does "material finish" imply in heat-sink terminology?
0
How can such an equation for the temperature of a *black body* be valid in this case?

5
Heat transfer in an airtight enclosure (component -> internal ambient -> heat sink on case?)
3
Regime of unsteady flow over heat sink
3
Heat sink, how much does fin and base width matter?
6
Heat Sink Isolation
1
Does the mounting orientation or side of a heat-sink matter?
15
Is a thermally conductive pad always useful between TO220 and heat-sink?
0
Water-Based Heat Sink
0
LM2596 Heat Sink
0
Heat sink thermal resistance