I'm working on an extremely compact circuit, and I'm trying to figure out the best way to current limit three LEDs. The issue is that they are RGB LEDs, so there are actually 9 of them. They dont need to be driven individually, so only three control inputs are needed, but I'm having trouble figuring out a compact way to tie them together.

I can't just put them in parallel (because of possible minute Vf differences), and I don't have enough voltage to put them in series. The voltage drive varies between 3-6 volts, and I want a current of around 10mA in each of the LEDs, +/- 10%. I'm controlling them with a 1.8V mcu, so I was just going to use a mosfet for switching, but I need something to limit the current more precisely than just having a resistor. Any thoughts?

It's very important that it be compact, because every mm2 counts here. I know I could use a purpose made chip, but I haven't found any that are small enough and have enough inputs. I certainly wouldn't want to be using 9 PSSI2021SAYs (although three would be ok, but how do you tie the LEDs together?).

The CAT4003B has 3 drivers each with a single enable/dim pin. 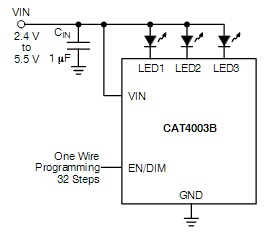 On-Semi's CAT4004A an eight pin 2x2mm has four channels and a Rset pin to set the power on current. LEDs can be adjusted between 2mA to 40mA with 1.3v logic level signal.

LED Current for all 4 channels set by External Resistor and dimming with a single Enable/dim pin. 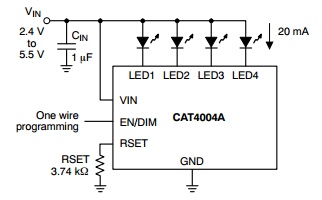 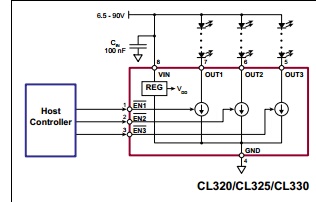 Not the answer you're looking for? Browse other questions tagged led low-power or ask your own question.

1
Can I interchange TIP3055 emitter & collector to avoid needing to insulate the heatsinks?
0
Change of RGB LED to cheaper one
4
How to separate the schematic of a RGB LED into 3 individual LEDs in Altium?
0
How to measure and power an array of unknown RGB LEDs?
2
Powering multiple WS2812B strips from different sources, are all grounds connected?
0
One voltage regulator (varistor?) instead of dozens of current limiting resistors in an LED array?
1
Finding current through LEDs in series-parallel circuit
0
Connecting a LED between two 74HC595 without current limiting resistor
0
How individual LEDs in LED strips (or matrixes or cubes) are being powered when supplied with >=12V instead of 5V?