Why are circuits considered loops?

So, I know that when you're talking about something like a circuit that includes a battery, a circuit LOOKS like a loop, but that's merely because of the fact that the power supply is physically close to the output.

However, this doesn't have to be the case, right? Batteries are just self-contained because it's convenient, but you could drain a power source by connecting it to ANY positively charged endpoint, if I understand this right.

Are circuits therefore considered loops just because it's convenient to think of it that way? As a river cannot flow in a circle, neither can electricity because it would work out to a net zero potential thus meaning no movement!

Most circuits are considered loops because charge in conductive materials tends to equalize electrostatic potential differences relatively quickly. Take a long wire/rod for instance. Let's say you can add electrons to one side of it. At first you start with 0 electrons. When you add the first electron, there's nothing else around so it can go basically wherever. When you add the second electron, it will push the first electron as far away as possible to try and create charge balance in the rod. This first electron moving is actually a tiny current and its movement could be used to extract work from it (because it took work to add the second electron to the system). Adding a third electron will push the second electron to the middle. The second electron's movement is half of the first so you could only extract half the amount of work out of it. The first electron is at the other end and hasn't moved at this point. If you keep adding electrons to the rod at one end, the movement of the other electrons will be less and less. Soon, you'll be at thousands of volts and not capable of extracting any work out of it because there's simply nowhere for the electrons to go.

Instead, what if we took electrons off of one side and added it to the other side? Now every electron you do this to will cause all the other electrons to move in response in one direction the same amount. Now you can extract a uniform amount of work out of the system for each electron you move. But what have you done? You've created a loop with your hand moving single electrons at a time. This is why most circuit utilize a loop. There's something that pushes electrons in one (or maybe both) direction. In your case, it's a battery, but generators and various other methods can be used to "pump" electrons to extract work from them at a different location.

You can think of a battery as an electron pump, it chemically moves electrons from the positive terminal to the negative so as to maintain a certain 'electrical pressure' (That is what the early guys called potential difference in some old books, and it is not a bad model).

To actually make this thing do anything useful you need to provide a path for the electrons to flow that happens to use the moving electrons to do some kind of interesting task[1]. This might be heating a thin wire to make light, or powering some other electrochemical reaction to recharge another battery, or making a magnetic field in a motor or whatever. This path must clearly be a loop if you want the system to run more then very briefly (think nano seconds).

Note that at no point is there any mention of ground or such, all voltages are measured relative to some arbitrary point in your doings, and for that voltage to do anything useful there must be a loop for current to flow [2].

Ground is one of those really crap words that means at least 3 different things in a highly context dependent way, ignore for now.

[1] Electrons in a copper conductor at any sort of current you want to play with move on average really slowly, think less then a mm per second, but a wire is like a tube full of ball bearings, you push one in at one end, one pops out the other far faster then any ball actually moves down the tube.

[2] Yea, I know, flash memory gates, electrostatic lenses, laser printers, all sorts of slight exceptions, but roll with it for now.

Sorry, no. A battery or any power supply must, in the long run, remain electrically neutral. The restoring forces on separated charge are very large, and permanent separation of charge at a circuit scale simply isn't going to happen. This means that if current flows out of one terminal it must flow in through another. About the closest you'll get to an exception is an electret microphone, which contains permanently separated charges - just not a lot.

Maybe you can assume that the voltage is the "force" which push the charges to flow in the loop. The current is that flow by unit of time.

Without loop, there isn't current.

... but you could drain a power source by connecting it to ANY positively charged endpoint, if I understand this right.

No. Look at the Energy Conservation and Charge Conservation. If we drain charges from a positive potential point, the charges MUST return through a reference point (negative terminal of baterry, GND, etc.), i.e. flow in a closed-loop.

I believe there is a more generic answer and we should think of current not voltage.

All circuits have to follow Kirchoff's Law - founded on Maxwell's fundamental equations that describe how current flows in any media.

Kirchoff's Law can be simply phrased as "The sum of currents in any circuit is zero" i.e. For every current leaving (in this case we'll call this a positive current) from a node an identical and opposite (negative) combinatorial sum of currents must enter the same node.

If you take this to a logical conclusion all nodes must be connected in one or more loops for the sum in the circuit to be zero. All the negatives and positives must cancel exactly.

However, voltage on its own means nothing. A voltage is a difference in potential between two points.

That is, you need a common reference point in order to actually assert the voltages in the first place. You therefore end up with a loop, with some resistance, whether you like it or not.

However, that also brings up another point. In the circuit above, even without the reference wire, there is still some resistance between the negative sides of the voltage sources, albeit huge. As such, you have a loop and a tiny current will flow in the wire, though it may be too small for you to measure it.

It is also important to separate the notion of current from the notion of electron movement. Current is an abstract representation whereas electron movement is a physical phenomenon. We say current loops through the battery or capacitor, but in actuality, the electrons do not. Rather, an equal number of electrons exit them as do enter the other side. That difference is subtle, but important.

Current is a flow of electrical charge carriers, usually electrons or electron-deficient atoms.

if we take a battery: the current flow in closed loop that is an electric current 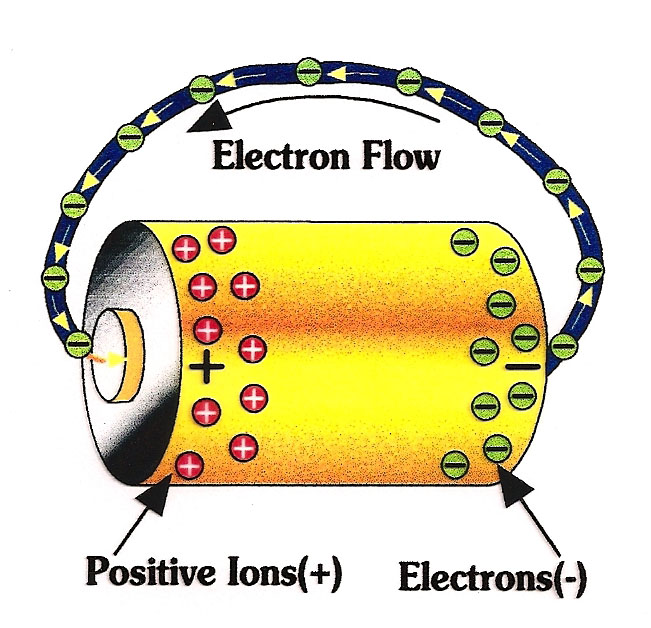 but some one tell me OK, but what happen when you touch a positive of the source whey we are chocked, 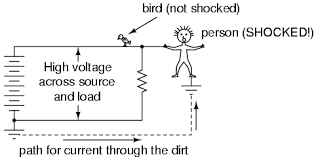 well the answer is very simple : the person makes a closed loop with the earth to make the electrons flows within his body, but the bird are not shocked because it does not make a close loop

a circuit that includes a battery, ...LOOKS like a loop

It IS a loop. The electrolyte of a battery is a good conductor, a short cicuit.

Perhaps you have the misconception that batteries "supply charge," or that the current through the electrolyte is zero amperes? Nope, doesn't work like that. Batteries behave like short circuits, very low internal resistance, and a simple circuit with a battery is a closed loop.

Batteries don't supply any charge to circuits. The flowing charge comes from the copper itself, from the electron-sea of the metal.

Not the answer you're looking for? Browse other questions tagged electricity or ask your own question.

40
Why can current only flow in loops?
2
Does electricity always flow in a closed loop and why does current flow to ground?

0
Why are both fuse and earthing are needed?
2
Why are plug tops rated 16A and not 17, 18 or 19A?
38
Why can the regenerative brakes of the Oslo Metro only share energy with other trains if they are "nearby"?
0
Current flow in circuits and nature
2
How long does it take for electricity to be considered OFF by general appliances?
0
How electric poles are distributed and placed
0
Short Circuit Scenario to understand short circuits