How does a 120VAC neon indicator lamp respond to a leading-edge triac dimmer?

I bought a dirt cheap toaster oven to convert to a solder reflow station, and I noticed in the teardown that it apparently has a neon power indicator. It goes out instantly when it loses power instead of fading like an incandescent, and it measures open-circuit when off.

I'm not opposed to cutting it out of circuit, but I also thought it might be nice to have a rough indicator of what it's actually doing, if it actually works that way. 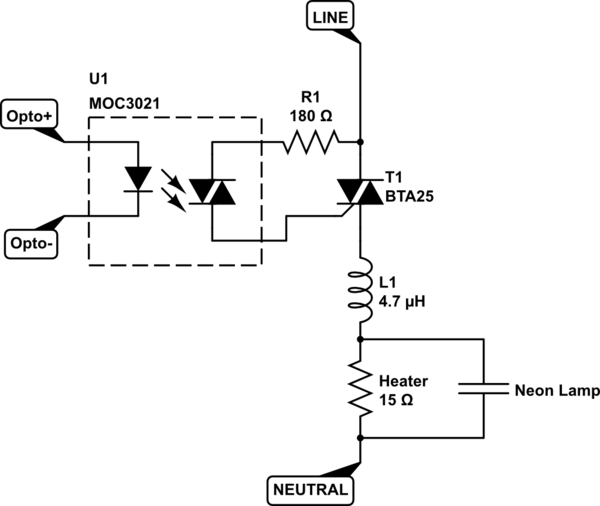 You can leave the neon in place, it will neither confuse the triac, nor alter your calculations in any way. When the oven heater is on the neon will glow.

The neon is not like an incandescent in any way, it is a gas plasma (near enough) and is essentially open circuit when below it's trigger point. Your circuit is slightly wrong in that the neon will have a series resistor to limit it's current after striking. The resistor is likely in the 100k ohm plus range.

Not the answer you're looking for? Browse other questions tagged triac dimming neon or ask your own question.