I am going to design a system that would be control remotely. The system consist of stepper motor and solid cylinder rod of about 30 inches long and needs to lift about 0.5 lb/0.223 kg mean up to 90\$^\circ\$ up and down in less than one second, maybe 0.7 sec. Now I want to calculate torque and the total power required to do the above task. For the total torque I knew that the total torque would be equal to;

How can I calculate \$t=Ia\$ where \$I\$=moment of inertia=\$\frac{MR^2}{2}\$ for solid cylinder? I am confused how to calculate the angular acceleration \$t=Ia\$. Any help would be appreciated. 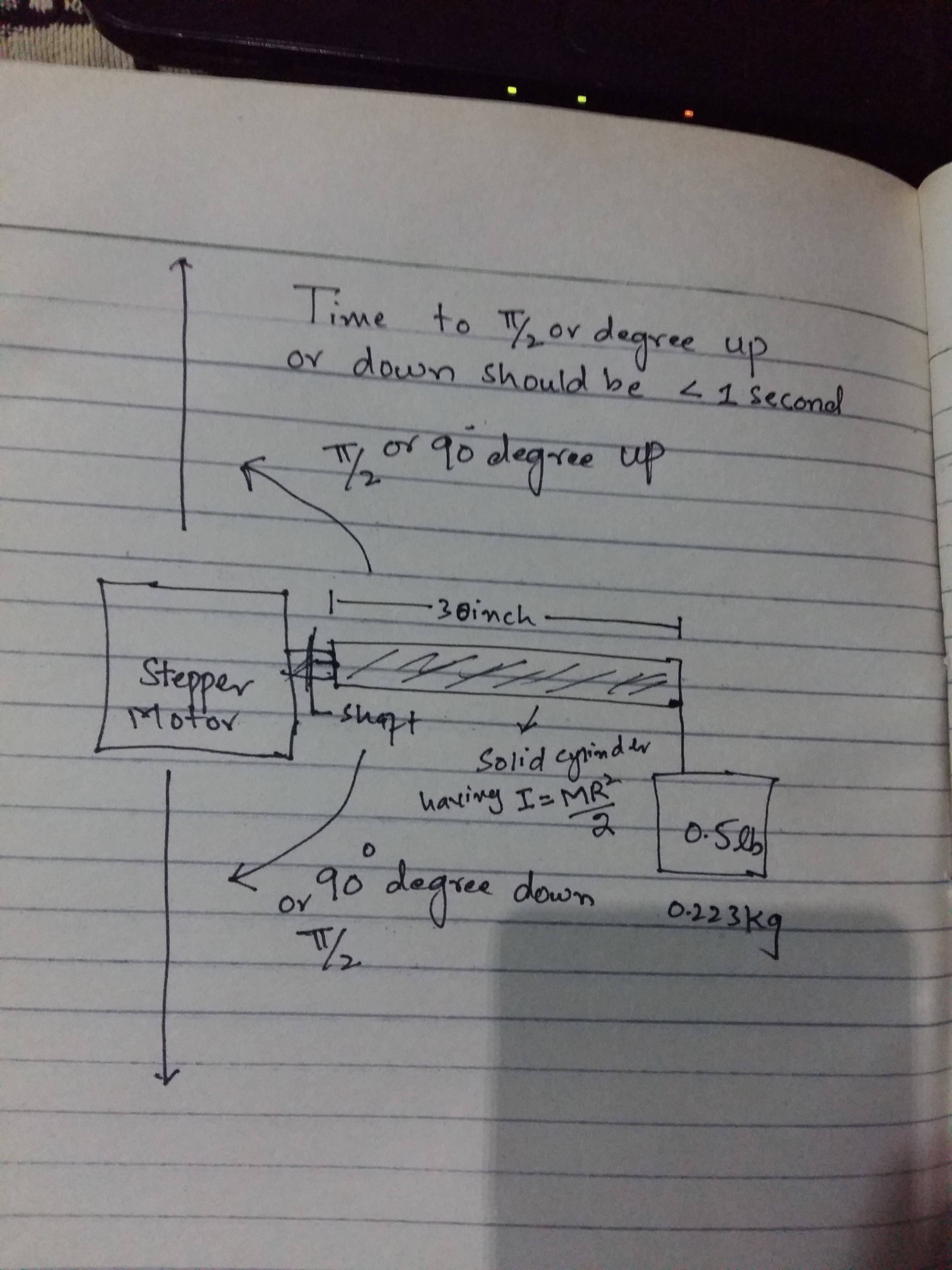 This is my attempt at solving this problem. 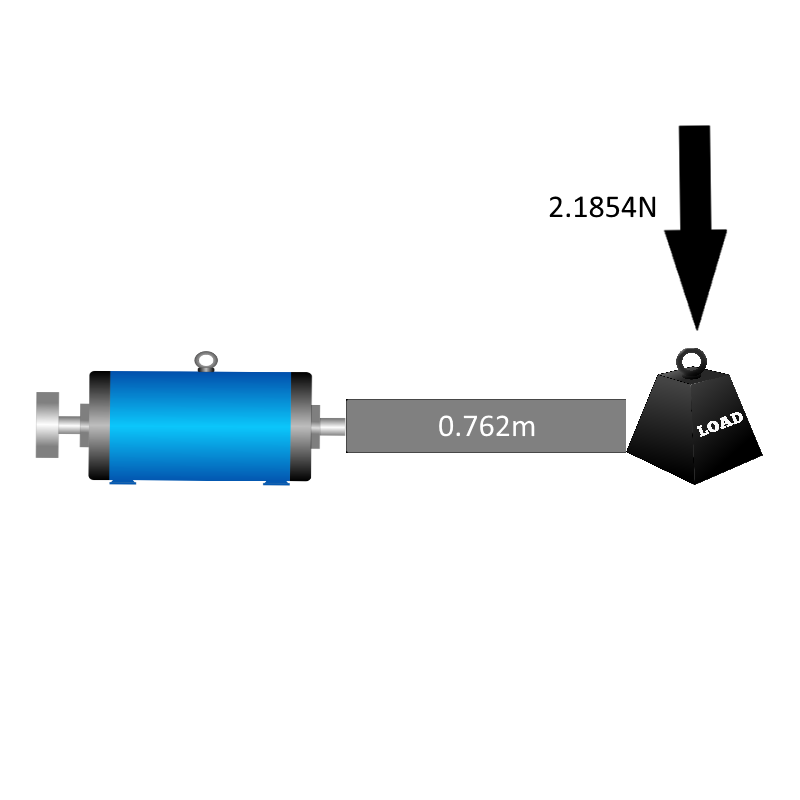 Our goal here is to lift and safely rotate the load 90º counterclockwise, therefore a great way to achieve this is by increasing the velocity and then decreasing it as a sinusoidal pattern. We want it to have a maximum velocity half way and then decrease the velocity the other half way. This avoids the need for the motor to instantly break thus avoiding damage. All of this has to be accomplished in 0.7s as you've requested.

First things first, if we want the velocity as a sinusoidal pattern, we need to use the mathematical sine wave. That is, that at any instant moment the velocity can be defined as the following: \$V = V_{max} \cdot \sin(x)\$

For figuring out the maximum angular velocity, we'll do the following \$\omega(t) = \omega_{max} \cdot \sin(t\frac{10}{7}\pi) = \frac{\mathrm{d} \theta}{\mathrm{d} t}\$ if you think about it, the angular velocity is just the instantaneous change in the angle with respect to time.

If we graph this function this is what it looks like:

which is precisely what we want. Rememeber our objective is torque, and that's all got to do with force which is directly proportional to acceleration.

The angular acceleration is nothing more than the instantaneous rate of change of the angular velocity with respect to time, that is \$a_{\omega}(t) = \frac{\mathrm{d} \omega}{\mathrm{d} t}\$

The graph is kinda messy to show as a simple image but if you do it on your own you'll see how you start off with maximum acceleration, at half way you have no acceleration and then you start decelerating in order to softly end.

We now have an expression for the torque that changes depending on the time.

We might as well look at a few other things now that we're at it. For instance, the instantaneous power. Power is defined as: \$P = \tau\omega\$

The graph clearly depicts how there are instances in time where there is no power.

If we want to calculate the average power, we'll have to first take into consideration that there are two parts to this function, one is positive and the other negative. So, in order to compute the average we shall calculate the sum of the area under the positive curve + the absolute value of the area under the negative curve, all of that divided by 0.7.

Probably a low power stepper motor has no issue in doing this task. If you really think about it, it is just a 223g load attached to a motor that isn't very far away.

In order to control the angular velocity and torque just use pwm connected to the gate of a mosfet, like shown here:

You'd also want to use gears to increase torque and reduce angular velocity. Remember voltage is proportional to angular velocity and current is proportional to torque, but we use gears instead of trying to fry a motor with so much current. In your original question you asked for it to go up and down, that is, you want to change the rotation. This can easily be achieved using a H-bridge with 4 mosfets like so: 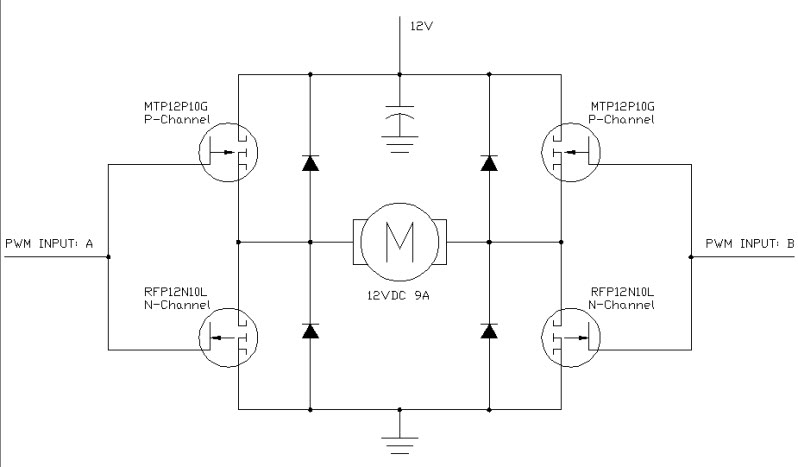 I hope this has at least somewhat helped you!

Note, I've used SI units all the time so remember to multiply it by some constant to convert it to the units you desire.

At this stage, what I can tell is that the torque is not constant. The Center of Gravity (COG) of the rod acts downwards always (say force F), but as the rod rotates, the torque T = r X F changes in magnitude, where 'r' is the vector from the motor center line and the rod COG.

The highest torque (which is what you should design for), will be when the motor will lift the rod from the horizontal level upwards. In that case just multiply the weight of the rod and the distance from halfway of the rod to the motor centerline

Not the answer you're looking for? Browse other questions tagged dc-motor stepper-motor electrical torque system or ask your own question.