Setting a potentiometer to increase the lifespan of an LED

i have a electrical circuit with a 9v battery,LED(0.018Amps),ressistor(500 Ohm) and potentiometer. And im trying to work out the correct ressistance(for the"pot")for the LED to light up at optimium level for the longest life span.Is this formula/calculation correct ?

You've already got the standard answer regarding a fixed supply voltage and some known LED forward voltage. But it is also possible to design a circuit that will be relatively efficient (you write, "optimium level for the longest life span") with respect to linear regulation, generally, and where you don't really need to know the LED forward voltage and where it will work well with a battery whose voltage isn't at all fixed over its lifetime. (A \$9\:\textrm{V}\$ battery will actually have a lifetime voltage that is: \$6.5\:\textrm{V} \lt V_{BAT} \lt 9.5\:\textrm{V}\$.) If you don't mind using BJTs, that is. 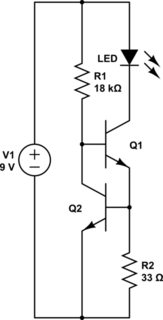 That's all there is for designing this. You don't really need to know the required voltage for the LED. It could be most any LED (all of them I believe I've seen, which are just LEDs and not entire circuits.)

It should be quite stable. Regulation of current through the LED should be in the area of \$\pm 2\%\$ over the range of battery voltage variations. However, there will be probably another \$\pm 4-5\%\$ due to part variations with the BJTs (which can be most any small NPN BJT you have laying around.) So if you build several of these, they will still be fairly close in behavior to each other.

Current efficiency is good. It wastes at most \$450\:\mu\textrm{A}\$ in order to provide \$18\:\textrm{mA}\$ for the LED, and as the battery voltage declines this added requirement also declines with it. This works out to around \$97-98\%\$ efficiency (in terms of assigning and regulating the current through the LED.) This control overhead should be relatively hard to beat in a linear regulator.

Since efficiency has come up, I thought I'd add a "switcher" version of the circuit that should work over the same range of voltage inputs and will be relatively efficient in power consumption. (Perhaps 75% efficient?)

It's a relatively simple modification to the above circuit: 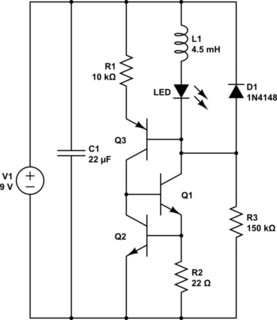 \$R_2\$ has to be lowered a little bit in order to increase the peak current so that the average will be about right. \$R_1\$ gets moved over into the emitter leg of \$Q_3\$ and must also be adjusted by about the same factor, plus a little smaller yet because of some added voltage drops. \$L_1\$ gets inserted into the LED leg and now \$D_1\$ is required to provide a current path for the inductor when the switches are off. \$R_3\$ helps start the circuit and its value isn't critical. \$L_1\$ also isn't critical and a variety of inductors within a factor of 10 in value can be applied, I suspect; including a variety of copper resistance values, too. \$C_1\$ was added here because \$9\:\textrm{V}\$ batteries have notorious internal resistance.

General formula for LED resistor is ...

However, it is not clear to me what this has to do with POTs and your interpretation of the lifespan on the LED. If you are intimating you want the LED to be driven with exactly 18mA, then you are better to drive the LED with a controlled current source instead of a simple resistor. 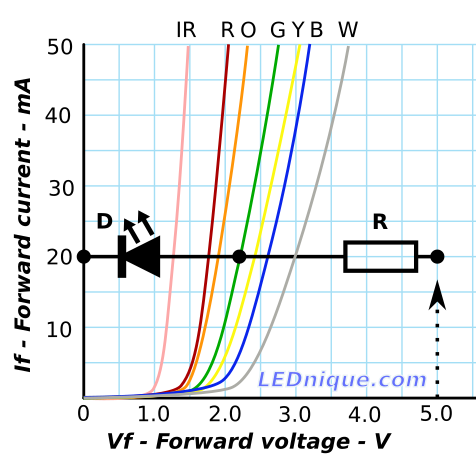 Figure 1. A graphical means of establishing the resistor value for an LED. Source: LEDnique.com

You can use the chart to work out resistor values for infra-red (IR), red, orange green, yellow, blue and white LEDs but check the datasheet values too.

You have a mistake on line 3.

You don't need the pot according to your calculation. The 500 Ω resistor is right.