How does RFID reader reads a passive RFID tag?

There are different types of RFID tags like active, passive, semi-active ect.

I can see that the active ones emits radio waves which is received by an RFID receiver and hence the data is transferred. This is like a classic radio transmission.

But how can a passive(non-powered) RFID tag is read by an RFID receiver as an overall system? What is the idea behind? Are the passports using passive tags? I cannot sense a sort of battery on a passport tag.

The first hit for "passive RFID" search on Google returns this:

A passive tag is an RFID tag that does not contain a battery; the power is supplied by the reader. When radio waves from the reader are encountered by a passive rfid tag, the coiled antenna within the tag forms a magnetic field. The tag draws power from it, energizing the circuits in the tag. The tag then sends the information encoded in the tag's memory. Source: Technovolgy.com. 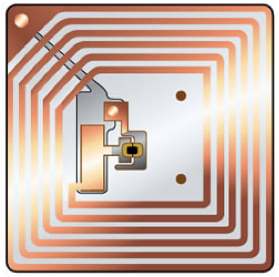 Are the passports using passive tags? I cannot sense a sort of battery on a passport tag.

Some countries have added RFID to their passports. They have no need of a battery as the passport does not need long range detection. (You wouldn't want someone to be able to identify you from a distance.)

Radio-Frequency Identification is the use of radio waves to read, capture, and interact with information stored on a tag. Tags are usually attached to objects, and can be read from several feet away. Furthermore, the tag doesn’t always have to be in the direct line-of-sight to initiate interaction.

A basic RFID system comprises two parts: the tag, and the reader.

The RFID tag has an embedded transmitter and receiver. The actual RFID component contained in a tag has two parts: an integrated circuit for storing and processing information, and an antenna to receive and transmit a signal. The RFID tag has non-volatile memory storage, and can included either fixed or programmable logic for processing transmission and sensor data. A passive tag is the cheapest option, and features no battery. The tag uses radio energy transmitted by the reader.A battery-assistive passive tag also features a small onboard battery, but is only activated when in the presence of an RFID reader. Furthermore, a tag may be either read-only, or read/write. A read-only tag has a factory assigned serial number used for identification in a database, while a read/write tag can have specific custom data written to the tag by the user.

The RFID reader features a two-way radio transmitted-reciever (transciever), sometimes referred to as an interrogator. The transceiver transmits an encoded radio signal to interogate the tag. The radio signal essentially wakes or activates the tag. In turn, the tag transponder converts the radio signal into usable power, and responds to the reader. 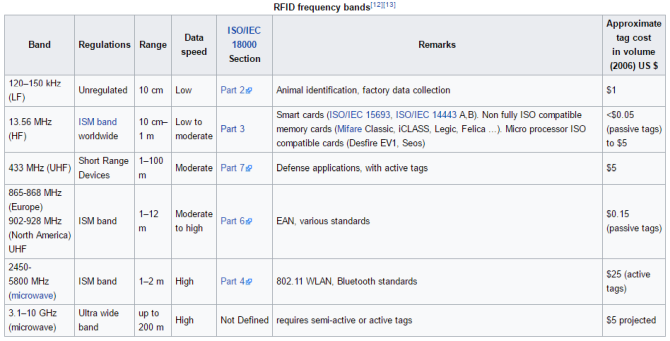 For your second question, wikipedia says:

A biometric passport (also known as an e-passport, ePassport or a digital passport) is a traditional passport that has an embedded electronic microprocessor chip which contains biometric information that can be used to authenticate the identity of passport holder. It uses contactless smart card technology, including a microprocessor chip (computer chip) and antenna (for both power to the chip and communication) embedded in the front or back cover, or center page, of the passport. The passport's critical information is both printed on the data page of the passport and stored in the chip. Public Key Infrastructure (PKI) is used to authenticate the data stored electronically in the passport chip making it expensive and difficult to forge when all security mechanisms are fully and correctly implemented. Many countries are moving towards the issue of biometric passports. As of December 2008, 60 countries were issuing such passports,1 and this number was 96 as of 5 April 2017.

They just use Passive Tags with some extra cream on top (Public Key Infrastructure)!