I have a handful of these chips and I'm trying to figure out what they are. This post links to two sites, smdcode and s-manuals. The former is dead and the latter only classifies A44 as perhaps a transistor. Google wasn't helpful either. Can you help out?

Blurry pic below. Since it's so generic/unbranded I don't think digging out the fancy camera gear changes anything. Body dimensions are 3.1 x 2.8 x 0.86 mm. 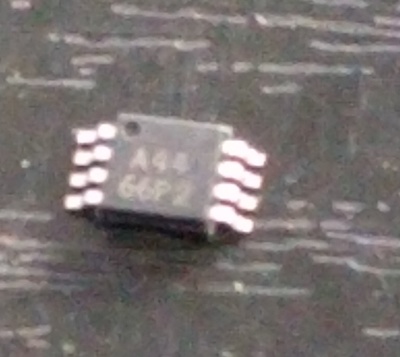 One possible match is the OPA2244 op-amp from TI (was Burr-Brown) - or a counterfeit clone version of it.

According to its datasheet, it is available in the MSOP-8 package and that package would have top mark A44 (with TI saying that there "may be additional marking", which could explain the second line).

TI refer to the MSOP-8 package as VSSOP and you see it as package code DGK in the datasheet.

(Excerpt from TI datasheet, edited to fit screen width, confirming A44 top mark for OPA2244 op-amp in that package)

As you may know, there are counterfeit versions of some other Burr-Brown op-amps. I haven't seen a genuine example in an MSOP-8 package, so I can't say whether your package markings look genuine or not.

Of course, as discussed in the earlier comments, without having any context to examine from the device being "in-circuit", this might be completely the wrong device identifier for your component. If you can afford to sacrifice one of them in the name of testing, you could solder one to a breakout board as if it's an OPA2244, add suitable support components and give it a try :-)

Bruce Abbott kindly found a very similar image to the photo in the question, from a seller on Alibaba who claims to be selling OPA2244 op-amps: 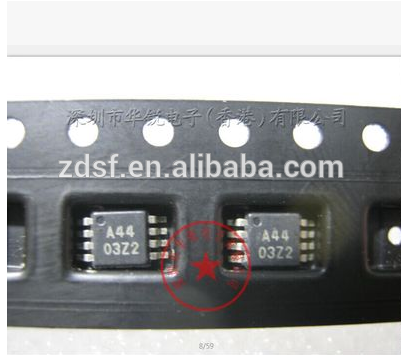 This adds further evidence that the combination of those markings, on that package, could be OPA2244 op-amps (or a clone).

2
How to identify SMD devices from the codes on top of the component?