I'm reading an article about voltage smoothing and I intuitively understand why we need capacitors in output power supply circuit to provide stable voltage. But I can make out this 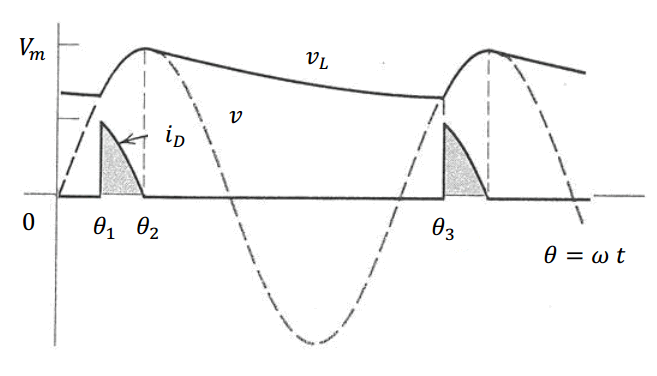 why does \$i_D\$ decreases from an value at \$\theta_1\$ to 0 at \$\theta_2=\pi/2\$? apparently there will be some different currents that pass through capacitor and resistor as long as the source is higher > 0.7V (diode voltage) allowing current pass the circuit .

The details on the rising edge of the diode current is complex and beyond the scope of the mathematics I'd want to present here. Suffice it that the complexities include a diode drop that starts out as zero and then follows the Shockley equation for a rising current edge that almost instantly reaches a nominal situation where the diode drop doesn't change much anymore. We can ignore this and consider it to be instantaneous here. (It's not, but close enough that it doesn't matter except perhaps to Spice simulators or someone going after some very strange idea in electronics.)

To get an estimate about the peak diode current we need an estimate of when the diode kicks in and starts to conduct. There will be some moment \$t_x\$ where the voltage curve itself first rises over the declining capacitor voltage (declining because the load resistor is drawing current from it when the diode isn't conducting.) Let's call this voltage at time \$t_x\$ to be \$V_x\$. In steady state and assuming the load \$R\$ doesn't vary, \$t_x\$ and \$V_x\$ will be constant. Our first job is to work out these values.

Technically, the declining voltage on the capacitor falls according to an exponential decay. Trying to solve that as equal to a sinusoidal voltage curve is beyond the mathematics I'd like to work on. (It involves the LambertW function, followed by yet another difficult solution; neither of which are worth elaborating here.) Let's also ignore the diode drop itself (treating the diode as ideal in this sense.) Since we are assuming it is fixed, we might as well assume it is fixed at zero. (You can always go back and put it in, if you want.)

There are several approaches to try, even given the above. You could start out assuming the exponential decay and work from there. But one useful simplification is to just assume an average current based upon the starting and ending points. Let's assume that the voltage is \$V_t=V_0\cdot \operatorname{cos}\left(2\pi\: f\: t\right)\$, or \$0\:\textrm{V}\$ at other times when the diode isn't conducting. (\$V_0\$ is your peak voltage, of course.) Using the cosine allows me to start time (\$t=0\$) at a convenient moment, when the capacitor starts supplying the current into the load. Assuming the starting point when the capacitor is supplying all the current begins at \$t=0\$ (but close enough but not always exactly true), then the average current through the load resistor is \$\frac{V_0+V_x}{2\cdot R}\$, and therefore the total charge lost from the capacitor is \$\frac{V_0+V_x}{2\cdot R}\cdot t_x\$. This must be restored during the time from \$t_x\$ to the beginning of the next cycle at \$t=\frac{1}{f}\$. So we know that the integral of the current times time during this last recharge period must equal our other equation:

I'd simplified a little bit, earlier, using an average for the load current. You can also use the following as a starting point, keeping the exponential decay rather than assuming that average current. This is:

Now that you know the time, the peak current is easy. You can compute it from the rate of change of voltage times the capacitance, so:

So I just ponied up an LTSpice circuit to see what all these "predictions" do for us. Here are the results:

You can see that the peak current is pretty close to where I predicted it would be. But smaller. What did I miss? Well, I didn't include the current through \$R\$ at that moment.

That \$i_D\$ is the sum of load current and capacitor charging current. Since the latter goes with \$1-e^\frac{-t}{\tau}\$ (\$\tau\$ being a positive real number), you see an overall decline of current.

Since while diode is ON voltage is an arc of sine then current is an arc of cosine dropping to zero when input voltage derivative is naught at top of wave, as depicted in the question.

Exponential decay rules capacitor discharge into the load, a small negative exponential current should actually be visible in \$i_\mathrm{C}\$ graph in between charging pulses.

Even though normally much smaller than charging pulses it would definitely be a good idea to include it to account that in steady state capacitor average current has obviosly to be zero (on one period averaged quantities).

why does i_D decreases from an value at theta1 to 0 at theta2=pi/2?

2
Problem understanding the operations of capacitor
1
About the combination of two signals with capacitors
2
Value of the capacitor required for smoothing
0
Why E = (Vc + Vr) in a circuit with a capacitor and a resistor in series?
1
Sequence of capacitor's charge and discharge in voltage quadrupler
9
Low pass filter with two capacitors?
0
Capacitor Voltage Hold up (During Input Power Interruption)
0
MLCC DC bias voltage effect on AC?
0
Behaviour of parallel RC circuit attached to 'rectified' DC and AC voltage source