Getting two (or, one and a half) outputs from a single pin

I am doing a project with an ATtiny85 and of course I'm short on I/O pins. One idea I had was to use a single pin for two outputs (let's call them EN and DATA). 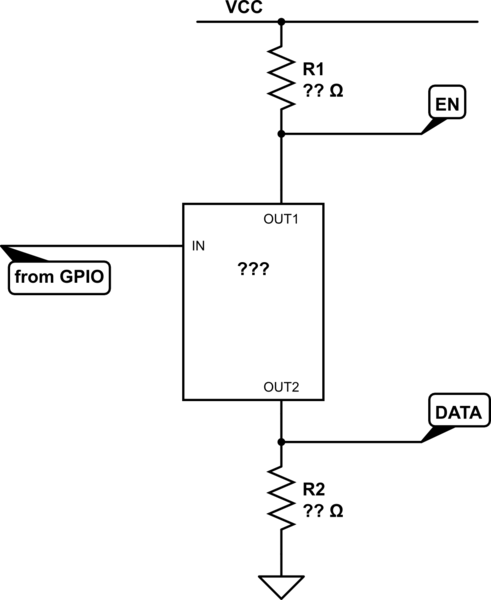 You can use two comparators and the high-input-low values. For instance: 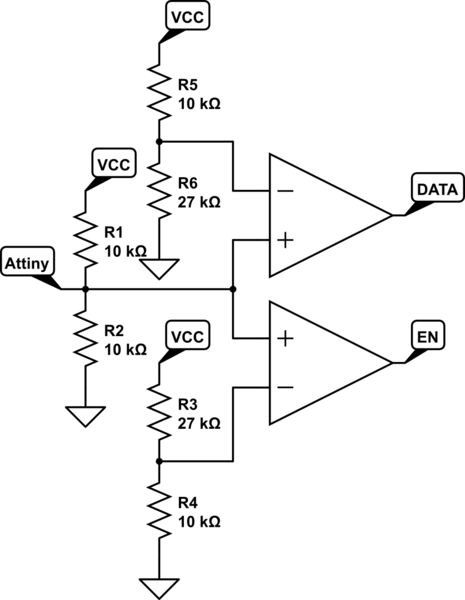 Note that this is not scalable unlike the solutions with the PWM or port expander. If you need more pins, maybe it is better to get a shift register and dedicate two pins to it (clock and data); this way you will have more outputs if you need them.

EDIT: Another solution, which does not involve using ICs but only discrete components, is the following one: 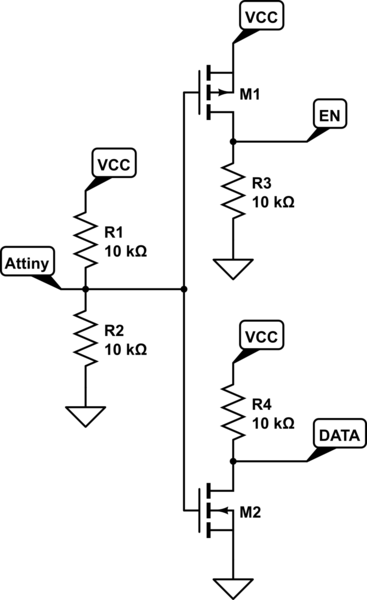 In this case, you will have to choose the MOSes so that they can turn on with Vcc/2; note that the values of resistors may be also increased if you want lower current to flow. You can also change the P-MOS with a PNP and the N-MOS with a NPN, but you'll have to add a current limiting resistor on their base (and I'm not sure how this influences the three states).

In any case, here is the table showing the statuses

Honest truth: What you're trying to do is easier implemented just by using a microcontroller with enough pins. It's probably even cheaper than an Attiny85. Who knows.

But: If you really must, you can do various things to get more output out of a single line:

Of course, I'm a nerd, so here's solutions less likely to be implemented by you, but worth mentioning for the fun of it:

The following ideas are based on serial-to-parallel shift registers.

You can just shift in your data to your shift register's serial data input.

Problem: Shift registers need a clock to know when to "sample" the input.

Solution: Generate a clock impulse whenever the input changes.

New Problem: OK, we can do that with a simple logic AND gate, combining your DataIN and a minimally delayed version of its output (delay through discrete components, e.g an RC filter). But: Then we can only have alternating bit patterns.

Solution: The output sequence of your pin must always be

What happens here is that the first 1 loads a capacitor (hence the "long" 1), the voltage across that cap triggers a delayed one-shot (for example, through a NE555) when it crosses a threshold, which then causes an clock pulse for the shift register.

The moment that pulse happens, you already have set the desired output bit B to the output. That must be shorter than the "fixed" 1 to avoid triggering the clock pulse again.

You do the above twice to shift in two different bits B1 and B2 into the shift register.

You can implement the above scheme sending

with the UART unit (if your microcontroller has such).

If you look closely, this is very similar to what the WSxxxx "neopixel" thingies do to communicate: 0->1 marks the start of a period, and the amount of 1 within that period sets whether its a logical 0 or 1.

This needed a rhyming title. In all truth, this should probably be called "linear feedback shift register generation of an output sequence" or so.

The idea is that when you use a shift register, and connect its input to a logical combination of its internal cells, you can build something that cycles through all possible output states (if you choose the feedback function appropriately). I'd explain that here, but meh, lazy, so read the wikipedia article on Linear Feedback Shift Registers.

Takeaway: if you can have such a LFSR, you can, just by toggling its clock, achieve all outputs (just toggle the right amount of times).

Doh'. That's nice, but it's harder to explain than a counter

Of course, the above is very cool (because it has numerous applications, e.g. in communication, data integrity checking and so on), and it's very effective in terms of the number of gates you need for that, but:

You can just as well buy or build a 2bit (or more) counter. And count the toggles of your Attiny pin. The parallel bit output of the counter can be your 2 output pins (or more).

I think it says a lot I first thought of LFSRs instead of counters.

If you don't use 1 and 2 kHz, but a couple of MHz, you can actually replace your connecting wire with suitable antennas, and do that transfer over the air. You'd also break the law by abusing spectrum that you have no license for.

Idea: same as above, but easier.

Let there be two independent pieces of info:

Then same as above, one low pass filter, followed by a discriminator that switches at half output voltage range, gives you the first bit of output.

A high pass filter, followed by a rectifier, and a capacitor and a discriminator gives you the second bit. 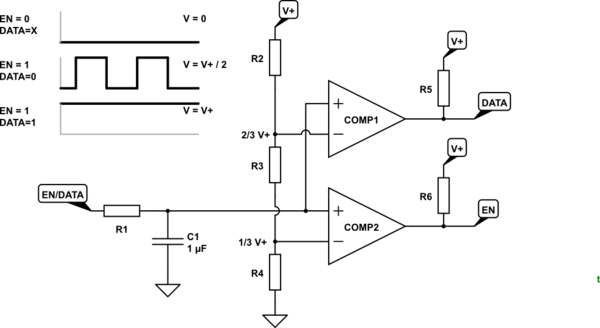 Figure 1. A simple 3-state binary coding fed through a low-pass filter and monitored by two comparitors to extract the data. Note that many comparitors are open collector output and require a pull-up resistor.

You will face some challenges getting the R1-C1 time-constant right.

One (bad) solution is as follows.

Basic idea is that if output is tristated, the schmitt will cause it to oscillate which will be picked up by the monostable to disable the output. This will glitch when disabling output, though. And has power consumption when disabled.

Unless you are doing an assignment that specifically states you must use an Attiny85, not matter what, then by far the simplest solution is to use a chip with more pins (eg. the Atmega328P). The cost would be virtually the same (eg. $2.00 compared to $1.50).

Some of the other answers which suggest using one-wire protocol, shift registers, schmitt triggers, comparators, etc. are simply adding more parts (and cost) anyway. It would be much easier to use a microprocessor that actually does what you want, than adding in extra chips to extend its functionality in a less easy-to-use way.

Another possibility: The /RESET pin can be configured as a general IO pin. You can get an extra pin that way. Be warned that reprogramming it afterwards will be more difficult. Having said that, it's not impossible. I have a post about doing high-voltage programming of chips like the Attiny85, using another processor (in this case an Arduino Uno). A few parts allow the 12V to the /RESET pin to be switched on at the appropriate moment.

Spinning off of @frarugi87's second example (https://electronics.stackexchange.com/a/334700/53375), you could do a similar thing with optoisolators: 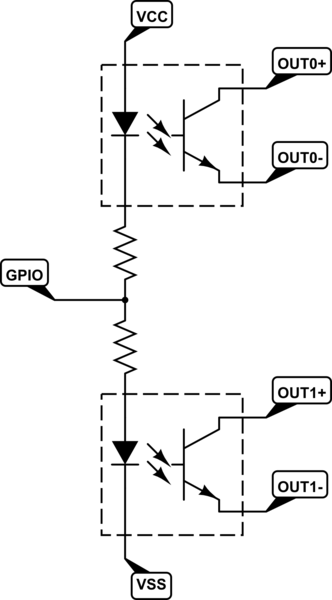 The advantage of this version is that it can consume very little current if the optos' forward voltage (including any extra diodes in series to ensure this) is more than half the supply. Of course, it can't be more than the full supply or they'll never come on at all.

OUT0 and OUT1 can have the appropriate names and pull-up/down resistors to produce the combination of signals that you want.

Not the answer you're looking for? Browse other questions tagged gpio pullup pulldown floating or ask your own question.

0
General Questions about PIC24 MCU Input and Output Pin Impedance, Voltage, and Current
0
Understanding pull-up resistors and the 7489 memory chip
1
Pull-up vs Pull-down on enable pin
0
When to use pull up/down resistors on IC inputs
1
Turning off op amp for low power application high side or low side
0
How to interface SN74 buffer with microcontroller into another data bus
0
GPIO connected as open-drain to opto-isolator's cathode
0
Fail safe led circuit
2
One LED capable of being turned on by two IC's
0
Why is the MCP23S17 device getting too much hot suddenly and randomly Raspb 4A?