I'm trying to control 3x 5m RGB LED strips using an Arduino Mega's PWM pins. Building off ladyada's tutorial: http://www.ladyada.net/products/rgbledstrip/. I created a 3x3 bank of N-channel mosfets, each being supplied by a seperate 12V, 5a power supply. As a diagram if each P is its own 12V DC power supply (P1 powering led strip 1, etc.) , and M is a mosfet:

I can't seem to get each row to be controlled by pwm when supplying power directing to the mosfets.

To test, I powered P1 with DC power and had the arduino plugged into USB. The colors remained fixed blue despite a script that was to cycle colors. When I powered the same row through the Vin and ground through the arduino, everything worked fine.

Why is this? Is there any way to power each row without utilizing the arduino Vin? Can I use 3 seperate power supplies and one Arduino Mega to do this? Or do I need to get 3 arduino unos or equivalents?

Here are two schematics. The first the arduino is plugged into a USB, and each bank of mosfets is connected to its own power source. The second the arduino Vin is powering one of the banks but not the other two.

As Russell mentioned a diagram of your connections would be useful.

Thanks for the diagrams:

Your problem is as stated above, you need to connect the grounds together. Otherwise, the Arduino PWM signal has no return path (remember a voltage is always relative to something) to Arduino ground since the grounds are not connected.
It's okay to connect all the grounds together (arduino and DC supplies)
The only time is isn't is in the very rare case where you might have a supply "ground" that is above earth ground relative to supply grounds (e.g. a 20 V supply with V+ at 50V and V- at 30V relative to earth/AC ground could not be connected to a 20V supply with V+ at 20V and V- at 0V)
If in doubt you can test for any voltage between the grounds with a multimeter (e.g. one probe to one ground, one to the other ground) but since most DC supplies are floating (not referenced to earth ground) then essentially the outputs are just like batteries.

Hope I haven't confused things here :-) Connect them together and let us know how it goes. Here's an altered version of your diagram (note extra black ground lines): 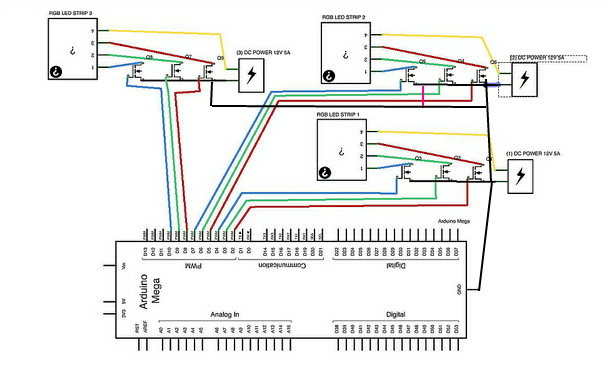 Your description will be very very very hard on most brains. A drawing - even hand drawn and scanned or photographed, would be better.

IF you are using the Lady ADA diagram exactly it should work.
Note that the MOSFETS:
MUST be logic level with Vth <= 2V.
MUST be N Channel.
MUST match pinout shown.

All TO220 MOSFETS you meet are likely to have this pinout.
If you use the horriuble little BSS170 or whatever MOSFETS they have a different pinout and Vth is far too high.

Not the answer you're looking for? Browse other questions tagged arduino power-supply power led or ask your own question.

3
Arduino and LEDs Power Supply Question
1
How to run 25 RGB LEDs by an arduino Duemilanove
2
LPD6803 RGB LED Strip with an Arduino
6
RGB LED - Set intensity on Red and Blue
4
Driving three high power RGB LEDs with PWM, from a 9v battery
0
Can you control the colors of a RGB LED strip with pots?
1
How to choose what a power supply to drive 2 x 10watt RGB LEDS?
1
RGB LED strip, powered by an ATX PSU and controlled by PWM, makes my speakers buzz with Arduino connected by USB
0
Arduino RGB ledstrip control 2 separate power supplies