Does anyone know what the technology in the "turn any surface in to a speaker" speakers is called?

It is all propriety, patent protected stuff and you just use pre made modules or is it possible to build it up from raw components?

There's not any special name for it that I know of. Vibration Speaker/Vibration Transducer/Surface Transducer. These names are all used interchangeably. It's simply the voice coil of a speaker with a mechanism to attach to a flat surface rather than having a cone attached.

Here is an article on the technology which is pretty much the same as speaker technology has always been:

And here is the transducer itself without as much plastic housing and markup:

You could build it up from really raw components though. Magnet + voice coil + method to attach to surface.

I used to work in a speaker repair shop. During the reconing process, we would sometimes run the voice coil with the cone removed by hooking up a frequency generator to check for damage to the coil. A big enough speaker supplied with enough power would vibrate the bench. If the speaker had been attached securely, it would have the same effect as a Vibration Speaker.

Sparkfun sells what they call surface transducers, which seems like an accurate and appropriate name: they change electrical energy into energy on a surface.

There's a video teardown here, one frame of which shows the basic construction: 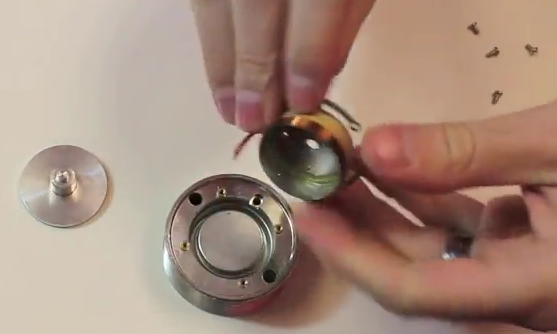 There's a voice coil with a few spring arms, a heavy housing containing a magnet on the table, and an adhesive plate to the left. Nothing proprietary or patented but to build a good one takes a good deal of difficult micromachining.

As mentioned in the comments there:

They are more expensive than normal speakers for a few reasons:
1: Since there is no cone they need to incorporate some other way of keeping the coil centered and stable inside of the magnet. You can see the little spring arms in the photo.
2: These are designed to impart energy into a surface while not having anything to push against; they use inertia to do the job. Consequently, these transducers typically are weighted to provide extra push.
3: Because of both 1, 2, and the fact that these are intended to be mounted in any orientation, the springs mentioned in 1 have to be fairly rigid. To overcome this, the transducer requires a more considerably more powerful magnet to provide any kind of decent sound at reasonable power levels.
They aren’t arbitrarily expensive, there is a lot of engineering packed inside of these little beasts.

Elsewhere in the thread they are called 'surface exciters', but this seems to refer to a lower-power, cheaper variety.

I once happened to hear about a company called EMO LABS. The website says they're in the process of changing their name to "Edge Motion Technology". Maybe this is because they want their speakers to be used for hip hop, punk, kraut, techno and free jazz as well - and not have the use limited to emo rock. It seems they have a patented product called Edge Motion™.

Relevant patents might include, but are likely not limited to:

More information may be found if you put the words "emo labs invisible speakers" into a search engine.

Disclaimer: I'm really not affiliated with them, but their CEO used to live in the same 'hood as I do before he went to Boston, so these are just some random pieces I think I know.

Not the answer you're looking for? Browse other questions tagged audio speakers or ask your own question.

0
Testing a 0.3W, 8ohm speaker?
2
How can I integrate microphone and speaker into my microcontroller project?
4
Before I build: will this circuit work, or have I overlooked something?
1
Replace vintage speaker connection by modern one
1
Potentiometer/attenuator between amp and speaker
0
Want to create a box that allows speaker switching with my amp
0
How can I identify specifications for this possible passive speaker with subwoofer? And what are each wirings on that cable for?
2
What might be inside my speaker switch?