Are these max-capacitor ratings (for a bridge rectifier) too conservative?

I'm looking at the Diotec BxxC2300-1500 datasheet (where xx is the max RMS voltage), and I'm a little miffed by the following table, which I've not seen in other manufacturers' similar datasheets:

It seems a little odd that the max capacitance would depend on the max RMS (and equivalently blocking) voltage of the device. Are they assuming that the capacitor is charged to the max voltage the rectifier can output? Because otherwise it doesn't jibe with how other manufacturers present such data or with my practical experience of (ab)using the run-of-the mill DB156 (or even DB107) rectifiers with a 4700uF cap, but at 12V; I've not seen any failures running that for years.

EDIT: I wanted to write this a comment to Olin's answer, but it turned out a bit too long: every bridge rectifier factory from Bulgaria to China makes something like those bridge rectifiers (and even more certainly the DB series). In the datasheets of such generics you can at best read "For capacitive load, derate current by 20%." and nothing more. Either those generics' datasheets are very skimpy of capacitive-load limitations, or this one is very conservative.

Also compare with Vishay's way (fig. 1) of presenting such info, where the derating factor depends on the I(peak)/I(average) ratio but not on the max RMS of the device. For such devices (including Diotec's), IFSM(max peak) and I(average) are the same for an entire series, i.e. they don't depend on max rms. 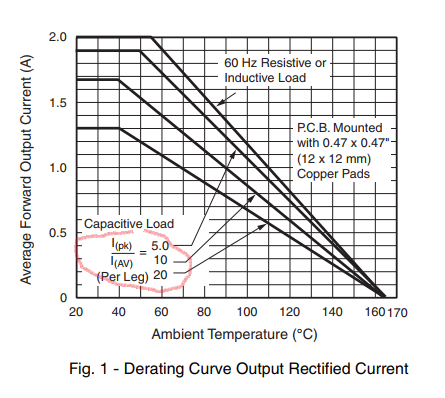 So I strongly doubt there's something special about Diotec diodes that imposes the dependency on max rms seen in the table, and I think there has to be some calculation that applies to any such device behind that table.

The max capacitance together with a series resistance is probably to limit inrush current when first connected.

Not the answer you're looking for? Browse other questions tagged capacitor datasheet bridge-rectifier or ask your own question.