Ask Question
Asked 4 years ago
Active 4 years ago
Viewed 279 times
1
\$\begingroup\$
Closed. This question is off-topic. It is not currently accepting answers.

Edit/tl;dr: What are some alternatives to reed switches?

I'm looking for a switch that can be closed one-time that doesn't require any case penetration. The design is inside a water-proof enclosure. The switch goes between an 18V, 25Ah battery and some electronics. I'm obviously aware of reed switches, which seem like the perfect solution, but I'm concerned about reliability.

The application is a scientific instrument which is deployed in the ocean and is not serviceable. The switch is necessary because the device is in-transit/storage for sometimes more than 1 year. The device operates for approx. 2 years on this battery.

I've done a lot of searching on this topic. I'm convinced I just do not know the right terminology to get me to my goal. This post most widely breaches this subject with lots of great suggestions but no great solution.

What I really want is something like a fuse, only instead of opening when it 'blows' it would close. This can be a complex circuit or a simple device, the only requirements are low power consumption(10's of uA or less) and no case penetration.

You could use a P-MOSFET and a fuse as shown in the circuit below.

However, that is a one shot deal and open to accidental enable and you would not be able to power it up to test it and shut it down again. The circuit also has a small trickle current when the power is off.

Instead you could use a P-MOSFET in a latching circuit as shown below. 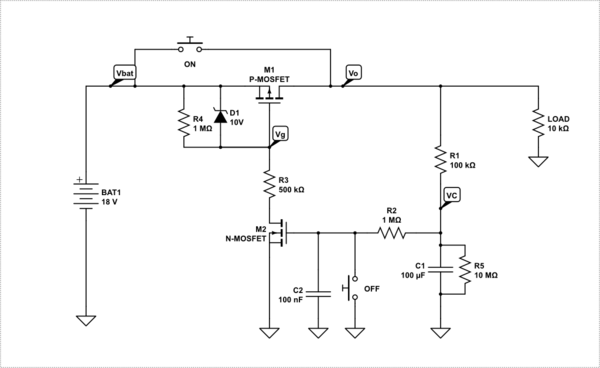 When the on switch is pressed it will pull the output up to the battery voltage which starts charging C1. When this charges up to the minimum Vgs of M2 the latter will turn on pulling the gate of M1 low latching the circuit on. I have shown values that require pressing the button for 5s to latch it on.

Pressing the off switch immediately turns off M2 and M1, then C1 begins to discharge through the load. Once it discharges enough, again around 5s with a 10K load, you can release the off button and the power will stay off indefinitely.

You should play with the charge and discharge paths to get it the way it needs to be for your load.

OR.. you could just bring the power to two insulated bolts that go through some bulkhead and slap a jumper across them when you want to power it up and then slap silicone over it...

You could use a reed switch directly, or have it activate a latching electronic circuit.

If you can permanently arrange to keep a magnet in the right place, then just a reed switch could work. The magnet placed in a special holder or something then becomes the on/off control. This should be fine as long as your current requirement is low enough for a reed switch to handle. Considering you are talking about running for 2 years from batteries, the current should be well within the capability of a reed switch. In fact, you may have the reverse problem of not having enough wetting current.

Having a latching mechanism has a downside. If it ever gets accidentally activated, then the device is irreversibly on. A single reed switch closure seems rather risky for this. That's why I was thinking of keeping the magnet attached for the duration the device is supposed to be on.

Another option is to have a reed switch activate a electronic latching circuit. The pass element would be a FET with low enough RDSON for the voltage drop to be inconsequential. Check the leakage current and make sure that wouldn't cause too much battery discharge during the 1 year storage time.

If using a read switch as a momentary input to latch the device on, then you should require a sequence that is very unlikely to happen by accident. At least require the switch to be closed for some minimum time, like a few seconds. That way vibration and shocks, like accidentally dropping the unit, won't latch it on.

In my KnurdLight project, I required two button presses to turn the light on. Each had to be about ½ seconds with ½ second gap between them. To do something like that, the reed switch powers up the processor, which then turns on the electronic switch. If the right reed switch sequence isn't detected, then the processor turns itself off again.

Yet another totally different option is a pressure switch. The unit doesn't power up until it is some minimum depth below water.

5
How to prevent sealed in product battery drain on store shelf?
6
Reed switch sticks until tapped

5
What are some cheap, reliable methods of water-proofing switches and buttons?
1
Inverting the logic of the inhibit pin on TI PTR08100W
2
Circular momentary switch for rotation
0
Replacing a switch with MOSFETs
0
Passive circuit to generate a pulse when a door opens/closes?
1
Passive Normally-Closed Switch For Audio Applications
1
Connect panel mount switch to PCB
0
Ultra-low Power DC DPDT Switch: Does It Exist?
0
BJT As a Switch. Efficency?