Why does this transistor circuit light the LED?

I'm trying to drive a 5v relay from an esp8266-12e via one of its digital outs (3.3v). However it doesn't produce enough current to trigger the relay. So I read how to do that from here and here.

I'm using a PN2222a transistor with an LED on a bread board to try this out, but it is not working as expected. Since the base in the NPN transistor doesn't have any power applied to it, I'd expect that the circuit would be open and the LED would not light. But it is lighting as seen in the pic. What am I missing (likely a lot)? Shouldn't it only light if I apply + voltage to the base? 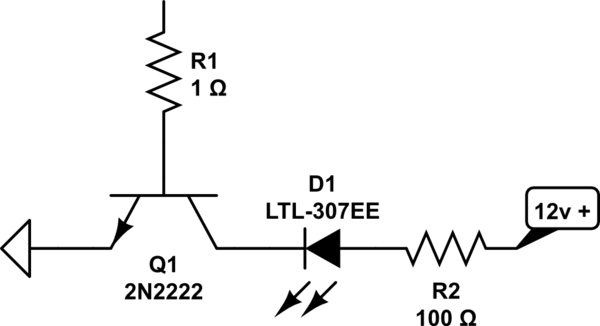 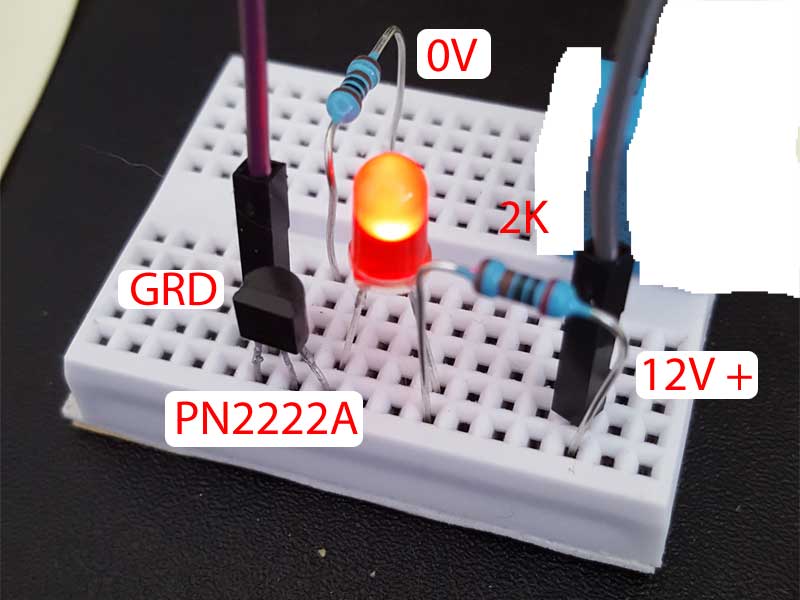 Shouldn't it only light if I apply + voltage to the base?

It would be adviseable to connect a resistor (about 10k) from the base to 0V. This resistor provides a path for the leakage carriers to escape to ground, and this will stop the transistor conduction when there's no voltage applied to the 1K resistor.

Also, you're connecting the led incorrectly. The led connects the 12V directly to the transistor's collector, this is wrong. If the transistor conducts (if there is base current), the led will fry. You should put a load resistor (about 470 ohms) in series with the led. This is my suggestion of improvement to your circuit: 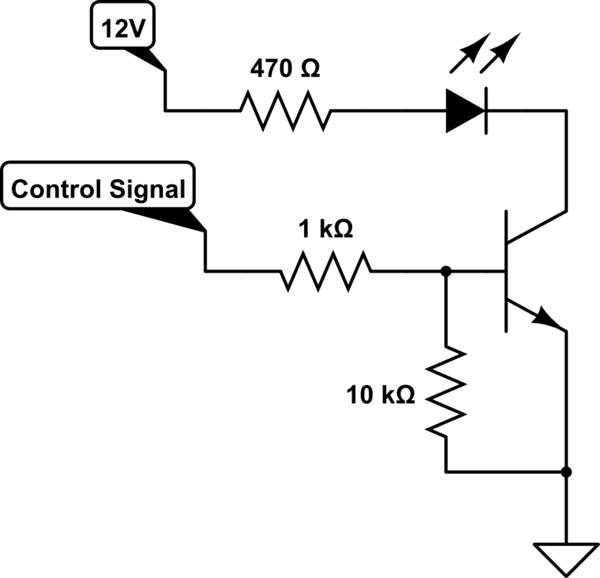 Thanks to the user tlfong01 for pointing an error in the words that I used to describe the base-resistor.

Since English is not my home language, I ask for any suggestions to improve the text and thank you in advance.

My life as a 50 something Shed-dweller has led me to the fascinating world of electronics, and recently I've been hoovering up as much information as I can about transistors.

I see this is an old post but having experienced and then Googled exactly the same problem I landed here. I tried a few of these solutions which didn't work for me, then in a desperate last ditch I randomly turned my transistor the other way around. It worked perfectly.

I noticed the post here refers to a 2N2222 in the schematic and a PN2222A in the picture. As far as I understand these are 2 different transistors and more importantly the pins are the opposite way around. Looking at the flat side the 2N2222 pinout is cbe left to right and the PN2222AA is ebc.

I've also recently understood that testing these transistors using a DMM in diode mode will give a higher reading across b to e than b to c, hence you can identify the emitter by the higher reading.

Anyway I'm a total novice and I confused the pins on my 2N2222 thinking it was a PN22222A, and the LED lit with nothing going to the base. Swapped it and it worked perfectly. If in the unlikely event that anyone else is as pinoutly challenged as I am, then I'm very glad to have given something back in return for the massive amounts of fascinating information I've consumed lately.

You are missing a current limiting resistor for the LED for a start. If the transistor turns on your LED will be destroyed. 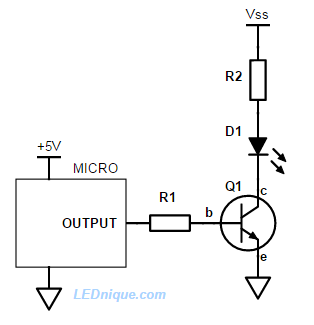 Figure 1. A typical NPN LED (or relay) switch can be used to switch a higher current or higher voltage (or both) load. Note the conventional orientation of the schematic with positive to the top and negative to the bottom, reading from left to right. Source: Driving LEDs from higher voltage..

I'm using a PN2222a transistor with an LED on a bread board to try this out, but it is not working as expected. Since the base in the NPN transistor doesn't have any power applied to it, I'd expect that the circuit would be open and the LED would not light. But it is lighting as seen in the pic. What am I missing (likely a lot)? Shouldn't it only light if I apply + voltage to the base?

Your understanding is correct. You must have something else wrong. Post a photo of your setup.

It sounds as though you have a pinout error, a wiring error or a dud transistor.

Given the voltage measurements you have, it looks to me like the part is not a PN2222A. If it came from some dubious source, then maybe it's marked wrong or was put in the wrong bag.

A PNP transistor with Japanese standard pinout (E-C-B) such as 2SA1015 would explain the measurements.

Usually when a transistor is severely damaged it will be either open or shorted, not exhibiting the relatively large voltage drop you are seeing, nor the "working" junction difference of 0.6V you are seeing. Reverse emitter-base breakdown voltage can be in the 7-9V range typically for jellybean silicon transistors.

Before continuing your experimentation, be sure to increase that base resistor to something reasonable such as a few K, and 2K is okay for the LED series resistor.

From what I see on your breadboard it's likely that the transistor is dead and allows about 2.5mA current to flow.

You said that Vce=7.6V. This together with the fact that the forward voltage drop of the red led is 2V, the voltage drop across the 1k resistor will be about 2.5V. Therefore 2.5/1k=2.5mA current is flowing into the collector. But in normal situation this corresponds to a 0.7V drop across the base-emitter junction. So the transistor is probably dead.

10
how to use a 3v output to control a 5v relay
1
How do I energize a 12v relay coil using a 2N2222 bipolar transistor?
1
LCD Delamination and Lamination Process

7
How does the collector emitter relationship work with a transistor?
8
Single LED single transistor circuit not working
1
Why does my NPN circuit only work with a separate power supply?
2
How to calculate the required base resistor for this BJT-relay circuit?
1
Why does the transistor work with collector and emitter swapped?
0
Relay does not turn ON
0
Does a transistor change the source of current? (re: esp8266 and infrared transmitter circuit)