I'm trying to measure the impedance (\$R_x\$) of C1 in the RC circuit shown below, but I'm getting some results I can't explain. 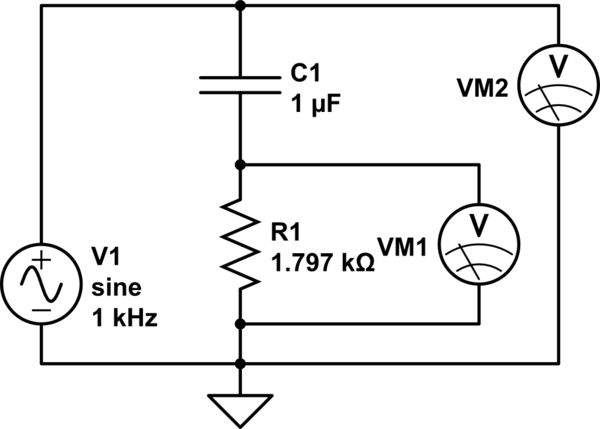 simulate this circuit – Schematic created using CircuitLab Measurement:
On VM1 and VM2 I measure the voltage by consecutively taking a sample of \$10^4\$ points over 4 ms on each channel then I calculate the RMS.
(I'm using a multichannel DAQ card for output and input. I can't find the symbol, hence the analog VMs).
Using Ohm's law I calculate \$R_x\$:

The applied current is a sine curve of 0.5V where I varied the frequency between 1, 5, 10, 50 and 100 kHz. It is turned on for about 2-3 seconds during the consecutive reading of the two channels.

For each frequency I make 10 measurements and take the mean of those.

Measurements:
These are my measurements for different capacitors: 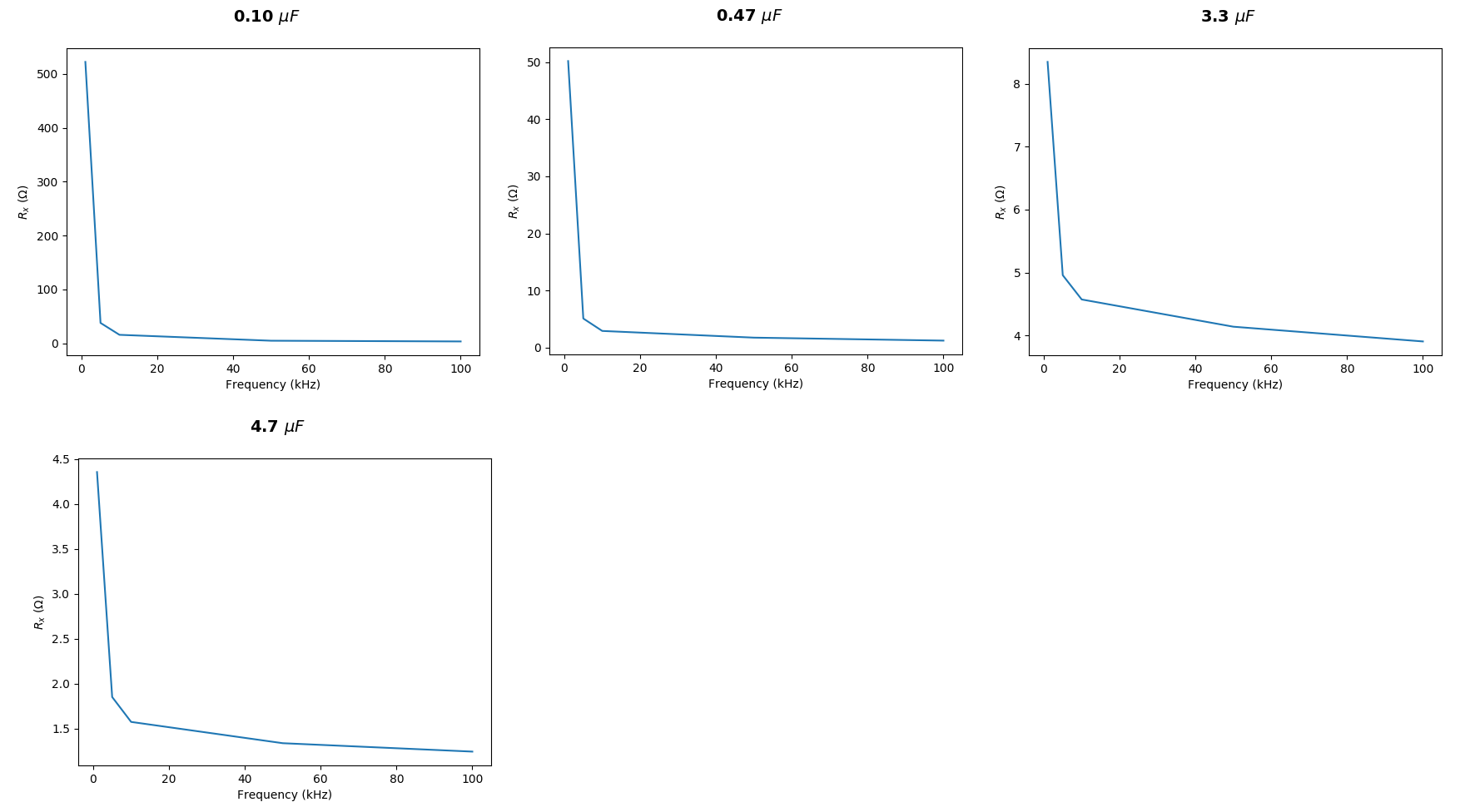 Why are my numbers this far of?

If I let something out please let me know and I will add it to the post.
Any tips, remarks or comments are appreciated.

Update
I've done the calculations again thanks for the helpful answers. It fits a lot better now: 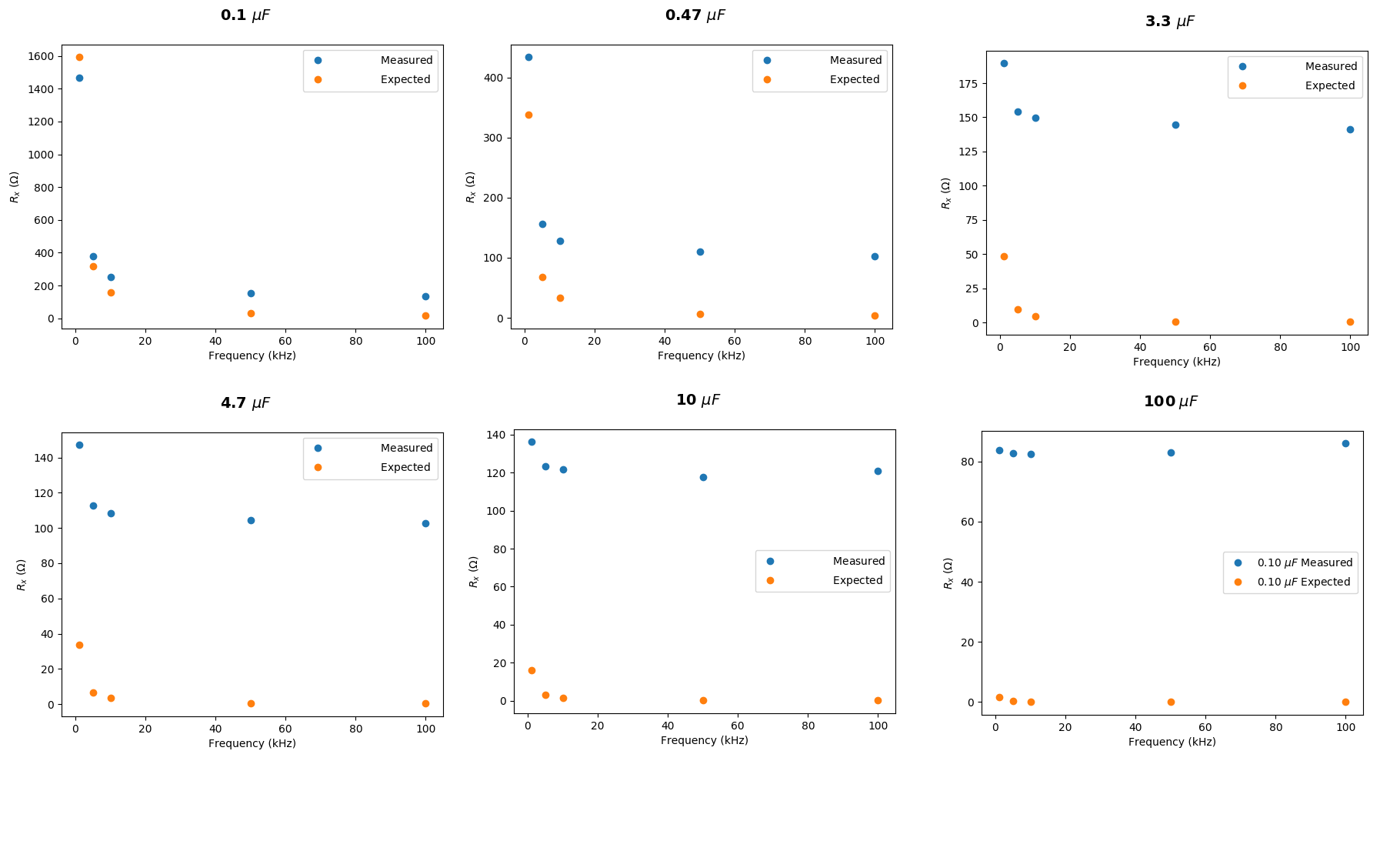 There seems to be some increasing deviation though, is there an apparent reason for this?

Let's take your case of the \$X_C=1591.\overline{591}\:\Omega\$ computation that assumed \$f=1\:\textrm{kHz}\$ and \$C=100\:\textrm{nF}\$. (I'm assuming you didn't actually measure the \$C\$ value but just assumed it... so we'll assume it here, too.) Your resistor, I take it, is actually measured with some meter. Again, I'll assume that your meter is perfectly accurate (it isn't, but who cares?) I'm also going to assume your "DAQ" board was used properly and that you interpreted the results correctly. No reason not to.

If you know a fixed frequency, then you can consider resistance (\$R\$) to be the x-axis (positive-only because I don't want to drag this out into never never land) and inductance and capacitance will be on the y-axis. By convention, capacitance (\$X_C\$) is on the negative y-axis and inductance (\$X_L\$) is on the positive y-axis. If you want to know what the total series impedance will look like (and you are using a voltage divider, so it's 'series' here) to the power supply, then you mark out \$R\$ on the x-axis, mark out \$X_C\$ on the negative-going side of the y-axis, and this forms the two sides of a right triangle. The length of the hypotenuse is the magnitude of the "complex impedance." 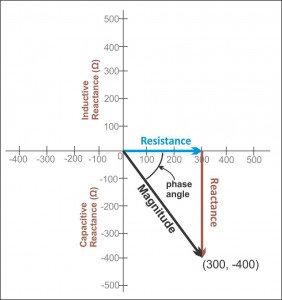 The above image gives you a picture of what I'm suggesting.

Now. Let's see. You probably worked out your equation so that it subtracts your nearly \$1800\:\Omega\$ resistor from this, directly. (Not as a vector.) So that would yield about \$600\:\Omega\$. Not far from what you wrote as the value you figured for \$X_C\$.

But the problem is that you did a direct subtraction.

So let's do this differently.

You should have realized that the equation is derived this way:

You need to take into account that the voltages across the capacitor and the resistor are \$90^{\circ}\$ out of phase. The impedance of a capacitor is

where \$j{\equiv}\sqrt{-1}\$ is the imaginary unit. This makes all the difference. You need to use phasors and complex math.

It seems that part of the problem is that you are confusing reactance with resistance. This led you to derive the wrong equation for Xc, which results in the wrong calculation for Xc. The correct equation is: $$X_c =R_1 \sqrt{ \frac{V_2^2 - V_1^2}{V_1^2}}$$

Use this equation and see if you get better results.

Another thing you need to keep in mind, is that this equation applies to "ideal" circuits. In real life, you will find that capacitors, do in deed, have resistance in addition to reactance.

Not the answer you're looking for? Browse other questions tagged capacitor resistance measurement or ask your own question.