Yes, I understood, this is very strange idea from newbie, but whatever... I want to make sawtooth waveform generator, based on capacitor charging by constant current. With specified frequency, capacitor will be short-circuited, producing sawtooth on the output. So, voltage controlled constant current source is needed. Yes, I understood that there is more convenient solutions, like Howland current pump. But! I have found XTR115 - current loop transmitter. 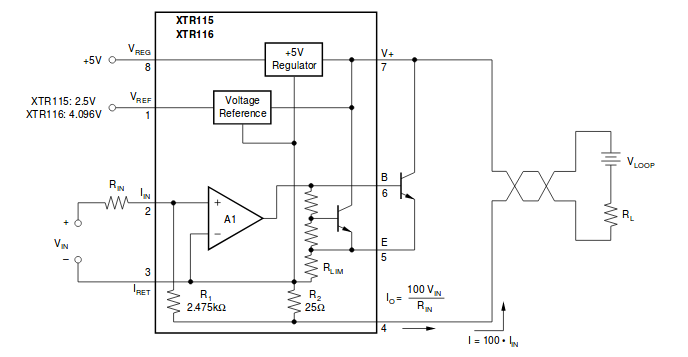 As I understood, this IC could supply constant current in range 0.25-25mA depending on input voltage Vin. Is this extremely silly idea to use this IC as voltage controlled current source?

It would be a silly idea to build a sawtooth generator this way if you were trying to make a commercial product. But as you're educating yourself, I'd say go for it.

On the surface, it is not a silly idea to use a voltage controlled current source IC as a current source. However, it will be a bit tricky to apply to a sawtooth generator, and you would learn a lot about more general electronics by the time you've done it successfully.

The problem with this current source is that it is powered from its output current on pin 7. In a sawtooth oscillator, that current is being drawn from the timing capacitor, so you end up with unnecessarily high currents in the timing circuit. It's not impossible to make it work, but it's rather a square peg in a round hole.