Why does inductor current in my LTSpice model rise to infinity?

I have been working on learning LTSpice because it appears it could save me a great deal of time.

To that end I have constructed this circuit 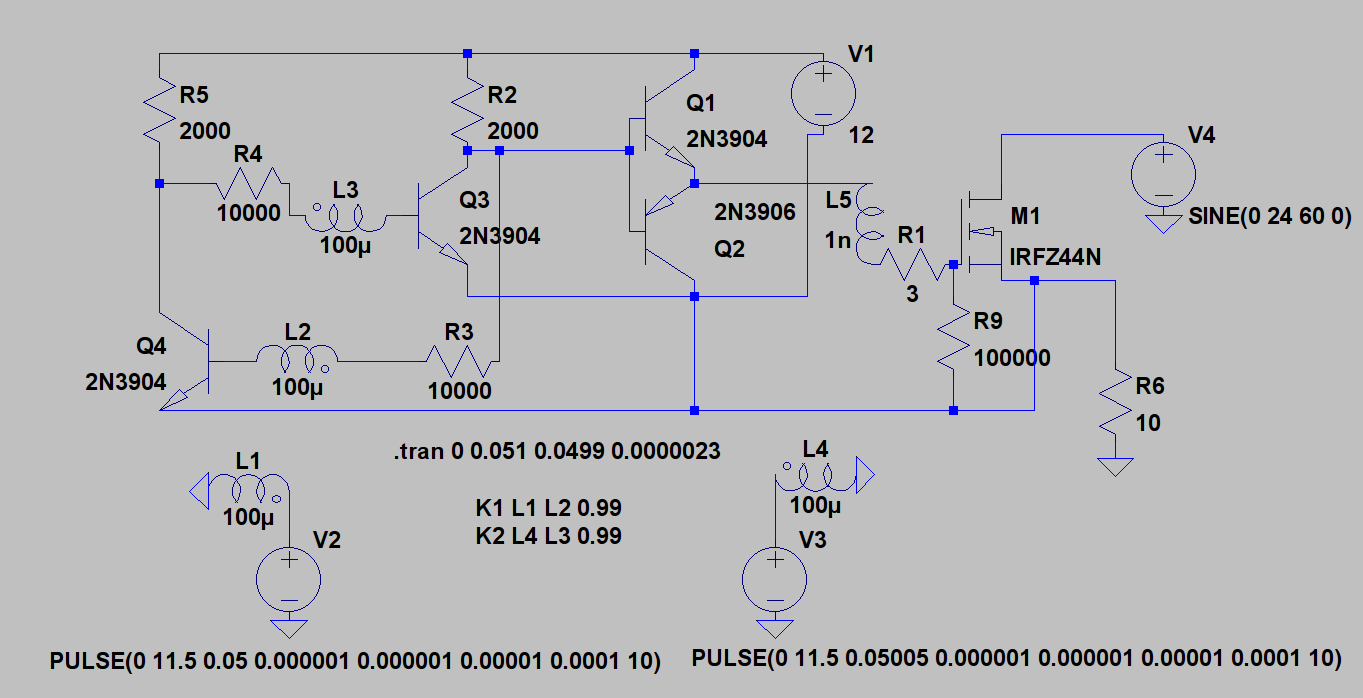 This circuit is a high side driver for a N-channel MOSFET. It switches a resistor on and off. It is capable of a 100% duty cycle.

This circuit consists of a voltage amplifier formed by Q1 & Q2. This amplifier switches the gate of the MOSFET between V1 and 0 volts above the source. V1 is 12 volts, a commonly available voltage. R2 biases the amplifier to the high state, that is to say the MOSFET is on by default. R1 limits peak gate current, L5 models PCB trace inductance. R9 causes the MOSFET to turn off when the circuit is powered down.

In order to switch the MOSFET, the bases of the voltage amplifier just needs to be clamped to the same potential as the source. Q3 and Q4 form a bistable multivibrator, commonly known as a flip flop. Instead of switches, inductors are used to manipulate the current of Q3 and Q4. The base of Q4 in series with L2 which is the "set" circuit. The base of Q3 is in series with L3 which is the "reset" circuit.

L1 is coupled to L2 (set circuit). L4 is coupled to L3 (reset circuit). All inductors have an inductance of 100 microhenries, this seemed like a reasonable value for a small toroid wound with a simple bifilar winding. Coupling factor is 0.99. I had to set the internal resistance of the inductor to "0.01 ohms" in order to get this circuit to work. Use of inductive coupling allows the high side drive to be isolated, although this does require a separate voltage source (V1).

V2 and V3 are pulsed circuits which work together to produce a 10000 Hz square wave in the other circuit. They just produce very brief pulses to actuate the flip flop. The pulse voltage is 11.5 volts.

Here is the graph of the voltage of V4 and R6, showing the circuit in operation.

After the body diode in the MOSFET turns off at 0 volts, we get a nice chopped up sine wave of voltage on R6. To me this demonstrates it works.

This is my problem. This is the current in L3 and L4

The current starts at 0 amperes and goes down from there. It's shown as negative just because of the way I have the inductor in the circuit. It's doing the right thing. So here are my questions

To get to the meat of things, you can operate an inductor in any way you like, while keeping its constant of inductance, so long as you stay within its limits of magnetic charge (Webers) allowed by an inductor's design. This limit is controlled by the core material, where you must avoid exceeding its maximum accelerating Lorentz force (in Teslas, or Webers per meter squared.)

Just as you must discharge a capacitor, you must also discharge an inductor. You cannot keep building up magnetic charge on/in the inductor, forever. All that does is increase the current forever. You can increase the charge for a bit, then decrease it, then increase it, etc. Or you can start at zero, increase it for a time, then drop it back to zero. But there is always a maximum magnitude (plus or minus) beyond which you cannot go. Because the Lorentz forces acting in the core will eventually be too great.

Just think of the inductor like a capacitor and realize that you cannot exceed the charge limits allowed by the device design.

Note: Magnetic force is actually a side-effect, because the effects due to the motion of charge take time to transmit across spacetime (speed of light.) Engineers still use the classical approach and treat magnetodynamics and electrodynamics as two different, but related forces. Engineers also still use Maxwell's classical approach which built on the idea of the aether and little tubular corpuscles (cells) that could be stretched or compressed. Einstein pretty much destroyed the idea of the aether and it's possible to reformulate Maxwell's equations in a relativistic form.

Not the answer you're looking for? Browse other questions tagged flipflop ltspice mosfet-driver or ask your own question.

0
LTSPICE - How to create PWM with rise time
1
Clean LC-Tank drive
1
How can a flip flop alternate between two clocks, turning one off and the other on and repeating?
0
Weird circuit behavior at breadboard
0
LTspice- Huge current spikes across MOSFETs in full-bridge inverter
1
Why does this Mosfet get Hot?
1
LTspice model of the UC3845 oscillator
2
Using a behavioral voltage source as a zero crossing detector for inductance current in LTSpice