I'm trying to fix this little electronic toy. It's really not much, 8 buttons, you push one, the lights go on, and a little melody plays. Now, I really don't know much about this, but really wanna fix that toy :)

There is a single controller, splitting to two circuits, one for diode lights, and another one to a speaker. The way it broke, as it's there is no sound. There is a transistor (or I think it is) for each circuit. For each, one (right) leg is straight to the batteries, the second (left) leg is to the chip (through a resistor), and the third one (middle) is to the outlet (from one it's to the speaker and from another it's to lights).

I believe the transistor for the speaker circuit just broke (IMO, sitting an hour in rain would do it). But, the only things I see on this transistor (again, I don't know what is it, really), are: C945 the first line, and P73C on the second line. There is absolutely no markings on this thing, and it has three legs and black solid body. It very much looks like this: 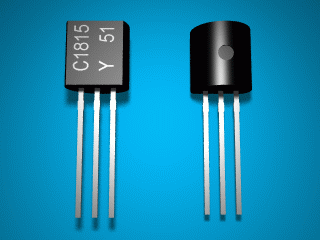 For the numbers that I see on it, I couldn't find a scheme that would tell me what it is, and what/where can I get as a replacement.

Some of the answers I've got tell me this is 2SC945, which is then, according to http://www.elexp.com/t_tranmk.htm would be NPN HF transistor. If so, and I were to order a replacement from, say RadioShack, how would I find one that would work?

UPDATE: I was able to replace this transistor with 2N3904 (I should've been more careful picking the replacement that had the same order of pins, but hey, this was the cheapest one available). Thank you for all your help, support, and explanations :)

It looks a lot like a 2SC945, whose TO92 packaging matches the image you posted.

Not the answer you're looking for? Browse other questions tagged transistors identification or ask your own question.

2
Determining Suitable Replacement Transistor?
1
Is it possible that a new transistor is not good even if a current runs through it?
4
How to choose an alternative for a specific BJT transistor?
0
Identify surface mount transistor
0
LED circuit with epoxy and (broken?) transistor
0
Power transistor identification
0
Transistor amplifier keeps flickering between working and off
2
Indentifying a JL chip in a Bluetooth