I got a transformer from a CRT tv (it is NOT a flyback transformer). It has four wires, two on each side. One side, theres a Blue and Orange wire, and on the other side theres a White and Yellow. If I plug 9V into the orange one, and touch the negative side to blue, it makes sparks. I have pictures.

If I connected the positive to white and touch the negative to the yellow wire, it does makes sparks but they are less prominent. If I connect + to orange, and - to white and touch white and blue, it measures at 8.42V on my multimeter, but makes some sparks, and shocks me. So I have no idea whats going on, I think it might be a current transformer but then the voltage would be lower. 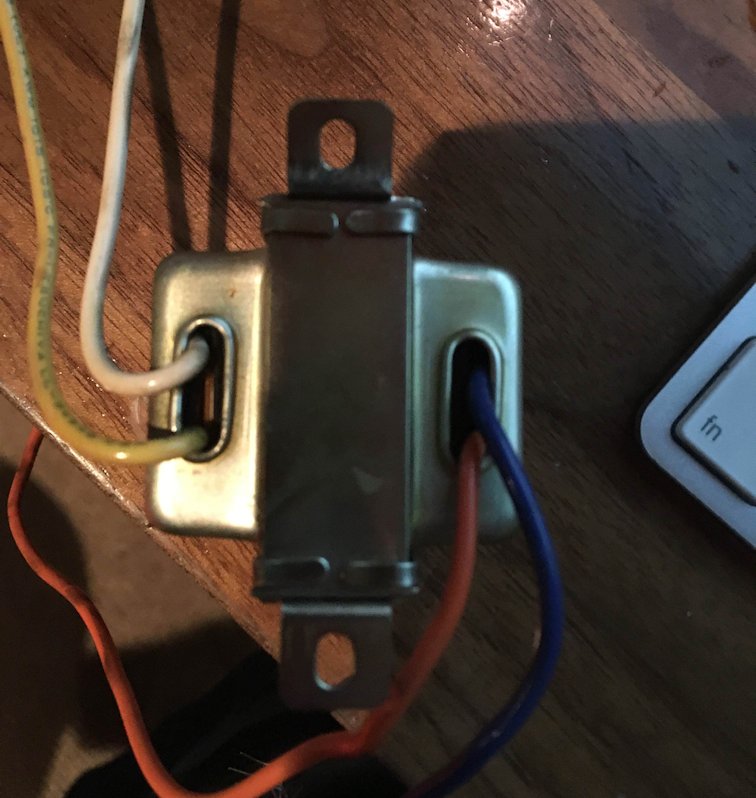 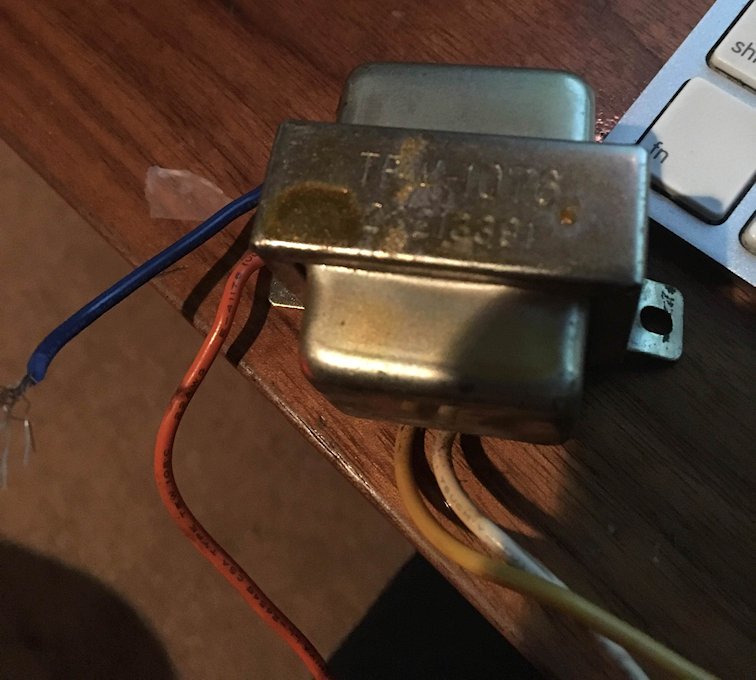 UPDATE 1: @mguima @Marcovecchio That comment made my day ;). I do infact own a multimeter, it's not the best, but it works pretty well. I don't own a sinusoidal generator, and I'm guessing it generates a sine wave. Anyways, back to my multimeter. It's lowest setting for resistance is 200. I've discovered this:

For reference, doesn't read means that nothing changed. By default, the multimeter reads "1", until I hook it up. So when I say doesn't read, it means that the one didn't change. If it "didn't read" I would check all the setting for resistance on the multimeter. I think the one might mean a resistance higher than my multimeter, which is 20M. On one hand, I'm spooked. On the other, I think Blue/Orange are a pair and Yellow and White are aswell. I'm actually happy, because that matched exactly with what Marcovecchio said! One winding should be in a few hundred ohms, and one just a few ohms. In this case, yellow and white are the few hundred ohms, and blue and orange are just a few.

I'm going to test the voltage ratio, then report back. Should I use a 9V, or my 6V 2.9Amp battery?

You should first identify the windings. It's likely that wires on each side form a winding, so blue and orange might be a winding, and white and yellow form another winding. Look for pairs of wires that read low resistence between them.

At this point, you already know what you asked: to identify the wires/windings. Now you can optionally test the voltage ratio of your transformer, if you have an AC power source: get a resistor between 10kΩ and 100kΩ and connect it to the lower resistence winding, and apply a 5V, 60Hz AC (preferably sinusoidal) voltage to the higher resistence winding. Then, measure voltage across the resistor. You should read a voltage lower than 5V. The ratio between this voltage and 5V will give you the voltage conversion rate of your transformer.

The values I suggested (5V, 10kΩ / 100kΩ) are quite conservative, and are not likely to cause accidents, sparks or anything. Just be sure it's an AC voltage about 60Hz, not DC!

It's complicated! Every time you report a different reading from multimeter, the posts were edited many times...

White / Yellow, which reading should be about 148 ohms in both directions, is the primary winding, that connects to AC mains. White and Yellow should, both, "doesn't read" when each of then is probed with orange and blue in the other probe point.

Next step: Connect a wire to yellow and another to white. Get a switch; certify that the switch if at off position. Connect one of the wires (yellow or white) to the switch, and connect the other pin of the switch to another wire, and this wire to AC output.

Connect the OTHER primary winding (white or yellow) to the other AC output.

Put the transformer on a clean and empty surface, keep some distance, and turn the switch on (but be prepared to turn the switch off immediatelly, if necessary). If it sparks, or makes loud noise, turn it off.

99.9% chances of nothing happens when you turn the switch on, which is a good thing (a transformer should work quietly). Take the multimeter, adjust to AC 400V or AC 1000V. Touch BLUE with one multimeter probe and touch ORANGE with the another probe, and read the voltage in the multimeter, this is the secondary winding voltage.

By now, with some luck, you know what you wanted to know, the transformer wires are identified. A transformer like can be used in a power supply.

Not the answer you're looking for? Browse other questions tagged transformer identification or ask your own question.