This is a question that has two parts to it divided up into two sections. It is similar to the "Is Work done to Transfer Energy?" question but has been refined to include the conversion from Joules of work to it's equivalent Power and if they are indeed identical to one another.

The two circuit schematics are real world circuits with losses. Since there is resistance in the connecting wires, capacitor, inductor, diode, and switch the circuit is 95% efficient in the end and is far from perfect. The switch is manually closed and then opened by hand.

Only 1 cycle of energy transferred from C1 to C2 will be contemplated. In general the numbers and values in the circuit are arbitrary and may not be exact due to slight changes caused by resistance. Nevertheless everything will be kept as close as possible to what is actually known to be happening in the two circuits. The best effort is being taken to fashion the most accurate question.

At any one point where there are doubts of what is occurring there will be a short note about it to acknowledge it.

I am sure there will be some details that will be overlooked and brought up and possibly some nitpicking, (For instance is a Joule a unit of Work, Energy or both?). So this will have to be forgiven and possibly overlooked as it's insignificant, or not, to the final result and answer.

Section 1: Down below is a simplistic schematic of a capacitor C1 intially charged with exactly 1J of energy. SW1 is closed for 1 second. This causes the 1J of energy to be transferred into L1 inductor's magnetic field to be temporarily stored. Work has been done to transfer the 1J of energy from the C1 capacitor to the L1 inductor's magnetic field. Because of the losses due to resistance, the C1 capacitor has done 0.95J worth of work on the inductor within 1 second of time.

(Note:) An attempt was made to match the inductance with the capacitance for a resonant frequency of 1 Hertz precisely which would translate to 1 second per cycle.

First half of Question: What is the equivalent amount of power of the 0.95J worth of work that has occurred on the inductor within 1 second of time? 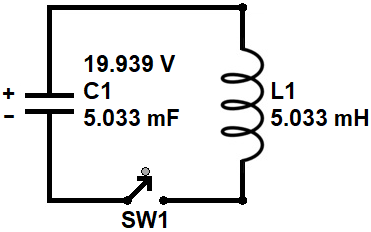 Section 2: Next SW1 is opened after 1 second of time has passed. The 0.95J of energy that has been temporarily stored in the L1 inductor's magnetic field then collapses. The 0.95J of energy is then transferred from the L1 inductor's magnetic field through the D1 diode and then finally into capacitor C2 to be stored. The inductor has done 0.95J worth of work on C2. Capacitor C2 ends up with 19.43 V on it.

(Note:) It is realized the energy may have dropped again due to resistances. It is also realized that the amount of time it takes for this transfer of energy maybe considerably smaller than 1 second of time since it's a transient voltage spike, but possibly not since the C2 capacitor may or may not be acting as a load, which it is believed that it is.

Second half of Question: What is the equivalent amount of power of the 0.95J worth of work that has occurred on the C2 capacitor within 1 second of time? Also what is the exact amount of time for this transfer of energy to occur?

From what is understood, power is the rate of work done and work is force x distance. Work has indeed been done because the energy has "moved" or "changed" during it's two transfers through the circuit. There is power because of the changing voltages and currents involved.

Power is defined as energy per time.

By definition, if 0.95J gets transferred in 1 second, then energy is being transferred at 0.95 watts. If the transfer takes place in 1uS, then the power is 950kW.

Are Joule's worth of work in 1 Second equal to Watts of Power?

Yes, according to what you apparently mean.

Not the answer you're looking for? Browse other questions tagged power inductor energy electromagnetic electrolytic-capacitor or ask your own question.

1
Is Work done to Transfer Energy?
-3
How much work/power is 1 Joule of energy capable of doing?

1
Is Work done to Transfer Energy?
2
How much Energy is Stored in this Capacitor?
1
DC Chopper Operation in SMES Design
1
Definition of quality factor as function of frequency
1
Difficulties with capacitor circuit analysis
0
Do kinetic energy and inductor energy violate conservation of energy?
2
Where is the electric field in an \$LC\$ circuit?