I am a newbie of Electronics and learning it as a hobby. Over a course of time I realized that Electronic Blogs are not the best place to learn Electronics, unless you have a strong basics and can correct silly mistakes in circuit diagrams posted online. Often I find it difficult to get a circuit working because they have minor typos or errors.

Now, I am stuck with such a situation. I am referring two separate Electronics Blogs which are appearing in Google Search who have posted couple of contradicting circuit diagrams of a NE555 based DC Motor Speed controller. I don't know if either or both of them are correct. The circuits use pin 3 and pin 7 of the IC respectively to drive the MOSFET/Transistor. 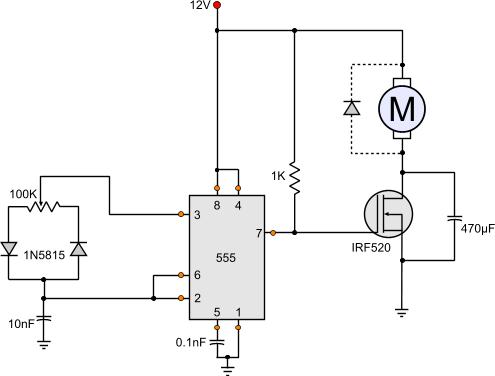 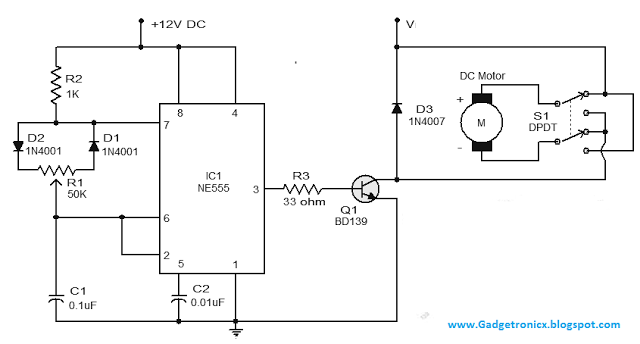 This question might not be new to Stackexchange because these contradicting diagrams are equally published all over the internet. Unfortunately I couldn't find it on SE. Please link the question, if you already have it.

According to my understanding circuit diagram 2 should be working. Because it is similar to astable-multivibrator config of NE555 and pin 3 seems to be generating square wave (i.e. PWM) signals to drive the MOSFET/Transistor. Please let me know if I am wrong and why.

Many many thanks in Advance!!

They are both acceptable solutions.

Notice in a 555 timer, the discharge pin is simply an open collector version of the output signal. 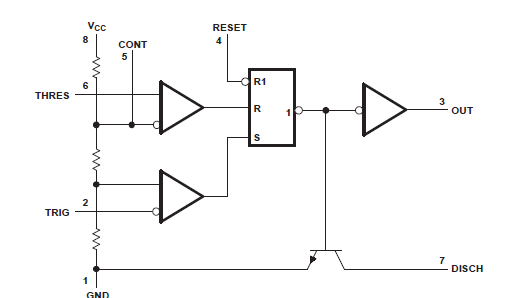 In circuit diagram 1 the 555 timer is configured as a square wave generator. The charge/discharge path for the timing capacitor is from the 555s output which will be near top rail or bottom rail. Since, with the pot at 50%, the resistance to the cap is the same in both states, it charges and discharges at the same rate. Hence the "square wave" configuration designation. 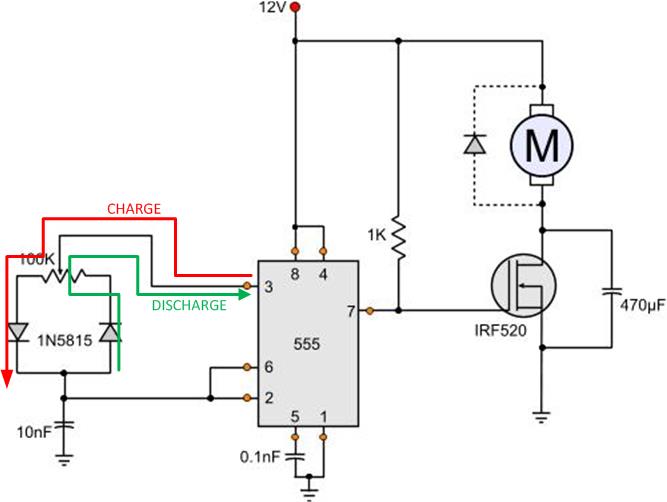 The discharge pin is therefore surplus in this configuration, though it still switches as normal. Instead, it is used to pull down the MOSFET gate during the discharge cycle.

In circuit 2, the more traditional wiring, the charge rate is defined by R2 + whatever the pot setting is, while the discharge is purely through the pot. With this design, mid-range on the pot is not 50% mark to space. Further, during the discharge cycle, this circuit wastes considerable current ( 12mA ) through R2 for no purpose. 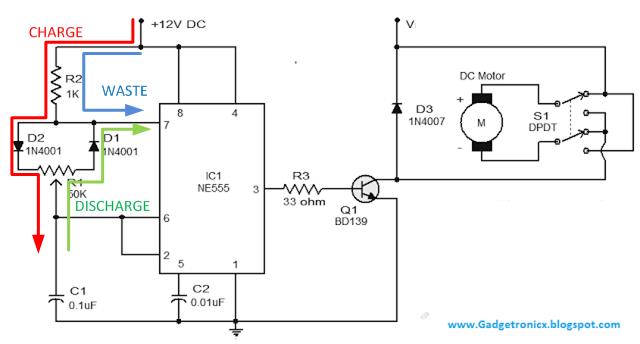 As such, circuit 1 is arguably the better one.

Notice though in these two particular examples, the design of the MOSFET gate driver gobbles up 12mA instead, so these two circuits are pretty close efficiency wise. A better gate driver circuit would fix that.

Personally, I would have done it this way. I might even add a nice LED in parallel with the motor so I could tell how hard the controller is driving. 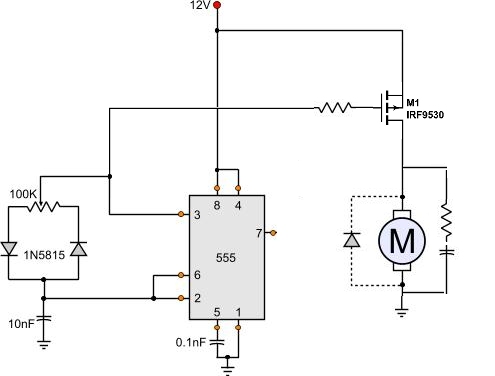 I'd need to check if both end points of the pot worked as expected.

On the 555, pins 3 and 7 are very nearly equivalent to each other, with the only difference being that pin 7 is open-collector, while pin 3 has a totem-pole output. In both of your circuits, a 1K resistor is connected to pin 7 to provide the pullup function, effectively eliminating that difference.

Not the answer you're looking for? Browse other questions tagged pwm motor-controller ne555 or ask your own question.