Getting partial flow; downstream from transistor doesn't seem to be working

I have a circuit in which I want the operation of one part to trigger operation of another part. I am using some adafruit sound boards, and I want that while the sound is being played, a set of lights comes on. Poking around showed the right thing for this would be transistors, being electrically operated switches essentially. Logically, everything seems to be working fine, but the light (LEDs) are coming on SUPER dim. It is noticeable that they are on, but they are not actually throwing any light out. 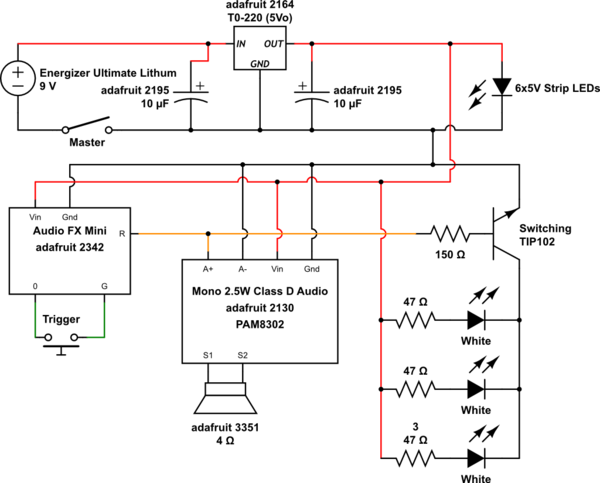 This instagram post shows how I am expecting the 3xWhite LEDs to look. Nice and blindingly bright (the bright spot on the left breadboard). This is with them just hooked up directly to the circuit, before I tried introducing the switching transistor.

This one on the other hand (video) shows how it is actually working. They are functioning logically correct, in that they are turning on while the audio plays, and then turning off when it is done, however they are only just barely turning on, not bright at all.

My first thought was either the LED or transistor-base resistors were providing too much resistance, so I've stepped them both down (originally they were both 220Ω), and even tried taking them out completely. That didn't help at all.

My current working theory is that the line the sound board uses to drive the amplifier does not provide enough amps to fully switch the transistor, so it is kind of "partially" closing. I think that may be the case based on this datasheet segment from the sound board (if I'm reading it right). I think I had seen in my google travels that most of these small transistors switch at around 100mA.

I don't even know if that is actually possible though. Can a simple BJT actually be "partially" triggered or is it a strictly binary ON/OFF?

The white LEDs I don't know a whole lot about. They are the original LEDs from the toy I am upgrading. I'm hoping to be able to just use them for the new circuit. Using my multimeter's resistance mode, they come on at 200 and 2000 ohms, but nothing above that.

Any other ideas or feedback? I could ultimately move the 3xWhite LEDs onto the trigger switch circuit without the transistor, but then they are just on/off depending on the trigger. I am really hoping to get them to stay on as long as the sound is playing, even if the trigger is released.

Your problem is very simple: you need to provide a higher LED voltage or go to something other than a Darlington transistor.

Look at the data sheet for the TIP102. Vce(sat), the collector emitter voltage when fully on, can be as much as 2 volts at 6 mA. The forward operating voltage for white LEDs is nominally in the 3 - 3.5 volt range. This means that even without limiting resistors at all there is unlikely to be much current through the LEDs, since with a 5 volt supply there is simply not enough voltage available.

Your best bet is to replace the TIP102 with logic-level NMOS FET. With only 5 volts available for gate drive, "regular" FETs may work, or they may not. Try something like an IRZL44N. They are a buck or two from places like Digikey and Mouser.

Alternatively, drive the LEDs directly from the battery, although if you do you should increase the LED resistors to reflect a resistor voltage of 3 to 4 volts.

Really need to know the LED current required but I have a feeling you are running into the current output limit of the micro. If so there will not be enough base current, even without a base resistor, and hence not enough LED current.

Try hooking it up as a Darlington instead. You do not need a base resistor in this configuration since the 47R is reflected back to the micro times Hfe squared.

Or use a n N-MOSFET. 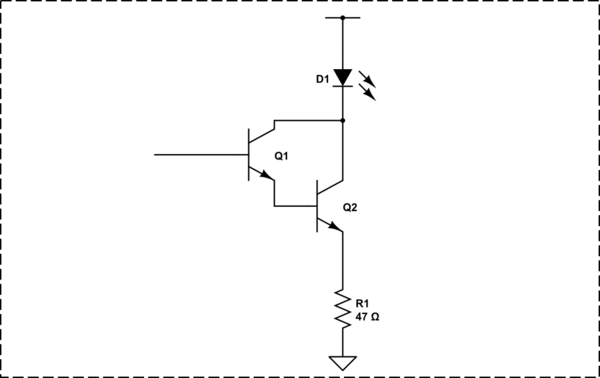 Now I can see your video!

Now I am sure you are overdrawing from the micro.

You would be better to hook up the LEDs this way. 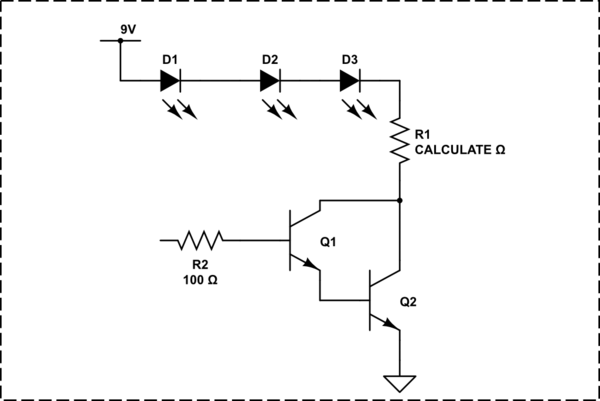 Run them in series direct from the 9V supply.

You need to calculate a new value for R1. Benefit is, less currents, and less strain on your regulator.

Also, With this configuration you may not need the Darlington.

Not the answer you're looking for? Browse other questions tagged transistors current switching or ask your own question.

2
Transistor selection for 5V LED circuit
0
Using transistors with different threshold voltages
0
H-bridge PNP transistor overheats
2
Turn on transistor with output from sound card
1
Transistor IRF520N not working as expected
0
Suitable replacement for 2SC2001 transistor? BC337 doesn't seem suitable
1
Can I switch a transistor "ON" when the base/gate voltage drops?
0
Why doesn't current flow in the other loop?
1
LED current at output of AND gate
1
Transistor as a switch for normally closed operation from a Raspberry Pi GPIO