Is There a Way to Measure when a Ni-Cd Power Pack is Fully Charged?

For my battery-powered tool sets (drill, saber saw, jig saw, flashlight, vacuum, etc.) I have Craftsman and Black & Decker. Both are 18 volt systems and both have approximately 20-volt "wall-wart"-type chargers. Neither system would indicate when the battery pack was fully charged. Both chargers have an LED that lights up to show "charging" but that does not indicate (by the light going off, or by any other means) when the charge is complete. Instead, the owner's manuals say to "charge for at least 7 hours", or something like that.

The Craftsman charger died 4 months ago. It suddenly went from ~20 vdc TO 3 vdc. The B&D charger died 2 weeks ago. 0 vdc. This isn't the first, or even the fifth, time I've had a wal-wart-type charger die on me. I bought an 18-volt WORX tool battery-pack charger (with a battery pack) for a buck. It is a "desktop"-style charger and seems much more robust. It charges both my Craftsman and B&D battery packs just fine. The WORX charger has a (third-lead) thermistor so since the other 2 systems don't, I charge the Craftsman and B&D battery packs through the WORX battery pack so that the thermistor is happy. That involves a spider-web of wiring: 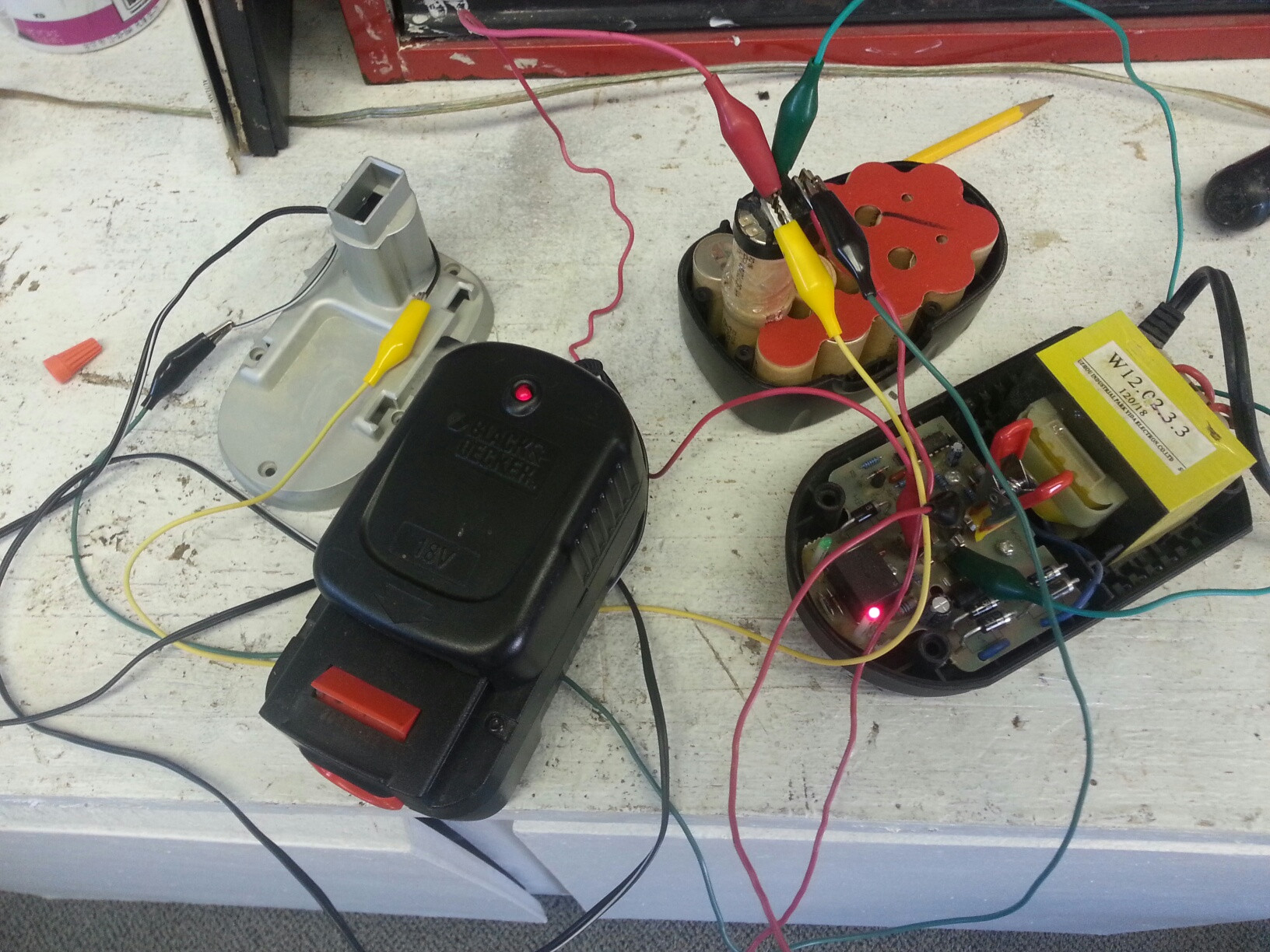 It all works fine, but (finally, my question!) I want to know: Is there a way to determine when the battery packs are fully charged, so I can plug in another battery pack to be charged?

NiCADs and NiMH both have the property that, at constant current charge, when they reach full charge they will show rapidly rising voltage. Rapid temperature rise, too, although standard NiCAD chargers will operate at a pretty relaxed (nominal 16 hours) charge regime, so temperature isn't a problem. This is not true of fast-charge NiMH, and temperature sensing can be important in terminating such chargers.

Not the answer you're looking for? Browse other questions tagged batteries charge nicd-battery or ask your own question.

8
How to make a balanced battery pack?
0
Charging 15 AA battery Pack
2
How to charge this lipo back?
1
Using Bench Power supply to charge NiCd pack
0
Li-Ion Power Pack vs Deep Cycle 12V Battery?
0
Balance charging battery pack one-half at a time?
0
Battery charger mAh rating - Can it be ignored if battery type is the same?