I have a two layer PCB, where I do not have the liberty of adding power planes. (However, I potentially could add ground or power pours). My issue is that I am trying to decide whether I should use a strict star-topology to route power and ground to each IC, or also add additional ground return paths for the signaling between the ICs.

To illustrate my point: 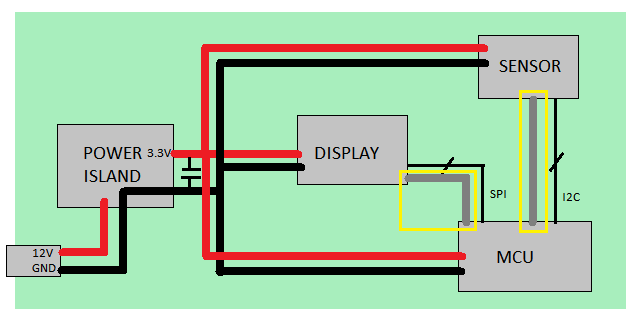 I am torn between adding these additional traces because of the potential of creating a ground loop. However, I may also need to provide a return path for the data lines between the ICs.

What is better? How do I solve this problem of ground loops versus return paths?

As an additional question--while not ecnomocically feasibly, is it worthwhile to try to move to a 4-layer PCB? When do you determine whether you should move up to the 4 layer PCB?

If the signals between the digital ICs are 'high speed', then yes, you must run the data connections and a ground connection in close proximity to each other, or have considerable crosstalk between parts of the board, and run the risk of data corruption. Whether 100kHz I2C would qualify for 'high speed' is moot, you would probably get away with it, it depends on the size of the board.

One way to do this is, as you suggest, run the data lines directly between ICs, and run ground lines with the data.

Another way to do it is to run your original star ground system, and run the data lines along the paths of the actual ground connections.

Where I don't have the luxury of a ground plane, and I would absolutely stay away from 'ground pours' if possible, as they are the worst of all worlds, I use a gridded ground system. This is very nearly as good as a ground plane. Ground (and often Vcc) tracks run East-West on the top of the board, North-South on the bottom, and are connected at every intersection by a via. This makes for a relatively stiff ground connection, where it's easy to route signals tracks close to the ground conductors at all times.

Some people will tell you that I2C does not use a return path. This is nonsense, all digital signalling has to use a return path. The only question is whether the return path is tightly controlled to run with the signal, or whether it's allowed to snake around on the board provoking possible problems.

It is true that with a sufficiently slow system, there is usually time for bad transients to settle before the lines are sampled, and so you'd get away with it without knowing. You're most likely to get away with it when the system is slow and sampled, like bit-bashed I2C. You're most likely to have trouble when the system is clocked on the interface, like SPI, as multiple transitions on the clock line will shift extra, wrong, data bits into the RX registers.

Not the answer you're looking for? Browse other questions tagged pcb ground grounding ground-loop or ask your own question.