How much Energy is Stored in this Capacitor?

This is a followup to my previous question: A capacitor stores half the energy when charged from a battery each and every time?

This is a real world circuit with losses. The losses are in the resistance of the battery, the switch, the capacitor, and the inductor.

The inductance value of the L1 inductor has been left out because it was not known or measured. It's not a value of 0 however as it has some inductance.

The capacitor starts out with an initial energy of 0 Joules as well as an initial voltage of 0 Volts.

The switch is closed only one time and left closed. The capacitor charges to the same voltage level as the battery of 12.33 V therefore it now has 76.014uJ of energy in it.

Does the 50% loss of energy that normally occurs when charging a capacitor from a battery (without the inductor) still apply to this circuit, even with the L1 inductor in place?

In other words, the capacitor will charge up to the same voltage level as the battery of 12.33 V as confirmed with an actual physical circuit. Has only 50% of the energy been transferred into the capacitor than what came from the battery?

The actual physical circuit has actual inductance in the inductor, but it is unknown, but it's not 0.

Summarized and to the point: 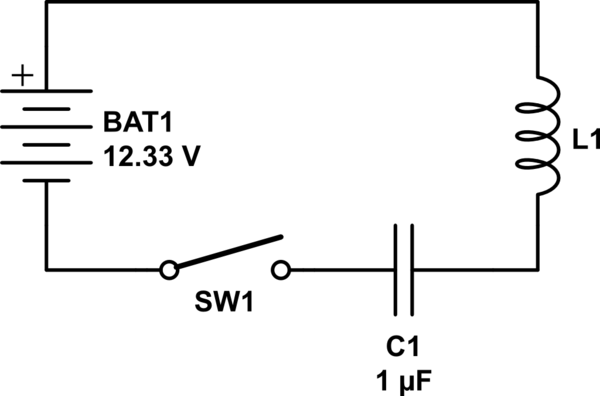 The LC tank, that you've drawn, will oscillate / ring, and as you've stated in your question, "This is a real world circuit with losses", it will come to a still. During the oscillations the same current will go back and forth several times through the same losses, aka resistances.

So having an inductor will drain more power than having no inductor. The total power lost (aka energy) will be greater with the inductor than without the inductor. I'm implying the same thing with different words.

If the LC tank is critical damped or overdamped then the current will only pass through the resistances once. If it's underdamped however.. Then you get oscillation / ringing.

Hmm, this is my gut feeling though, so I may be wrong. I don't feel that I have time to put up the math to prove myself wrong or right. It's not worth the effort.

When it has stopped oscillating it will reach a steady state and no more power will be lost. And then it will reach your strange 12.33 V.

Your question is weird and I feel that it doesn't matter what I write, will the correct answer give you anything meaningful?

When I feel that I'm becoming misunderstood, I take a step back and ask myself
"Who is my audience?"
"Do they know what I know?"
"Do they need to know something else to grasp the information?"

In other words, The problem is 99% of the time with me. Perhaps.. you need to reword your question so you don't have to make 3 nearly identical questions within 24h.

At T=0 when the switch closes, the following things will happen:

The capacitor, together with the inductor, is like a loaded spring. But it will "decompress" and surge current and start oscillate. I'm explaining it weirdly, but it's my view of it. And according to the link, the energy stored in an LC tank which is what you got in that setup, is equal to \$\frac{1}{2}CV^2 + \frac{1}{2}LI^2\$. At T=0 then the current will be 0. If we know the voltage and the capacitance, which we do, then we can calculate it. In other words, the total energy in the LC tank will be what you had in your question. "76.014uJ". However, this energy will be moving around in the circuit. At some point in time the majority of it will be in the capacitor, some other point in time in the inductor.

Since the oscillations are going in both directions, then... at some point in time the capacitor will be fully charged in one direction, such as having 12.33V across it's terminals. Fully loaded. Then in some other point in time it's voltage will be entirely inverted and it will have the same amount of energy. Such as having -12.33V across its terminals. This is probably how you are seeing a value above 50%. The equation is \$\frac{1}{2}CV^2\$, if V is -12.33 or 12.33 then the energy stored will be the same, right? But if you calculate some weird energy difference then you might see 99.8% because it's swinging to the top of some cycle and then to the bottom of some other cycle. It's hard to explain but I can see that it's possible that you've come to terms that it's 99.8%. While in reality it's 49.9%.

Solving it for DC first, you get what you had in your question, "76.014uJ", solving it for AC after a tiny amount of time has elapsed so everything is stored inside of the capacitor and none is inside of the inductor, you get "76.014uJ" as well. Then you put the AC component + the DC component together and you get an answer that is close to that of laptop2d, his has decayed a little bit which is why it's slightly less than 100%. I used superposition in order to solve this problem. I'm not a clever man. It took me 3 tries.

So the 50% part I spoke about earlier that was "swooshing" around, that's not a lie, but it was also a 50% DC component laying on top of everything which confused me and most likely you.

Well I do not want to write complete differential equation this time. But I think simple energy conservation can give us the answer.
After all the transients have died, the capacitor is going to have a voltage \$V\$ across itself. So finally, the energy stored in the system is \$\frac{1}{2}CV^2\$. Because there is no current no energy is stored in the inductor. So final energy of the system is: $$\frac{1}{2}CV^2 + 0 = \frac{1}{2}CV^2$$ The charge across the capacitor is coming from the battery. That is the battery moves the total charge \$CV\$ from its negative terminal to its positive terminal which has a potential difference V. So work done by battery is: $$W_B = CV*V = CV^2$$ So, once again half of it will be lost in the steady state with no energy in the inductor.

In this case, the capacitor never really 'charges' to a DC value. As soon as the switch is thrown, the circuit forms an LC circuit with a step input. The LC circuit then resonates (depending on the value of L and C). At this point you can't really say "how much energy is transferred" without looking at the circuit over time.

You can see below how the energy transfer from the supply (light blue trace) and the capacitor (red trace happens).

Not the answer you're looking for? Browse other questions tagged batteries capacitor switches inductor energy or ask your own question.

-4
How much Voltage and Energy ends up in this Capacitor?
-6
A capacitor stores half the energy when charged from a battery each and every time?

1
Release of energy stored in Inductor and Capacitor
4
Energy stored in a battery, formula?
1
Is .95J worth of work within 1 second Equivalent to .95W of Power?
0
How much energy is stored in the capacitor after 18us?
1
Capacitor charging and energy
0
What is reactive energy?