Low voltage DC over long(ish) distance on a small cable

I would like to power a small internet access point about 250m (800ft) away from my home (rural).

The wifi unit and modem draws about 16W max @ 12v. I had originally planned to power this via solar, but after some calculations of cost of the panel and batteries, and the physical size of the mounting required for the panels (very windy here) I started looking at other options.

Direct bury cable garden is really expensive here (New Zealand) but a box of cat5e - even the direct bury stuff isn't too bad.

I was wondering if I could run Cat5 the 250m, use all 4 pairs for power. I understand there will be a voltage drop along the run, and some wire resistance to consider - but could i use a higher input voltage and the regulate back to 12v at the remote end?

I was hoping someone here could help be with the maths on voltage drop, current capacity etc

Is it workable or am I back to a solar option?

Power over Ethernet is the generic term for what you are describing. There is a widely adopted IEEE standard for the technology (IEEE802.3) and a thriving market for compatible equipment, although custom implementations are also used in some cases. The standard might allow you to do exactly what you want. Assuming you already need to run twisted pairs for data, you can also use the same cable for power. Type 2 (PoE+ or 802.3at) systems are designed for power levels up to 25W (the system voltage is about 50V).

You may not need some of the safety/handshaking/robustness features that an IEEE compliant solution provides, but you could take advantage of off-the-shelf equipment to get up and running quickly. You would want something marketed as a "PoE injector" where your mains are located and something sometimes called a "PoE splitter" on your load side. You can find these with a DC-DC converter built in that will provide 12V at your remote location. In the U.S., each of these can be found for less than $20. Make sure that the power level matches your needs (the 802.3af or "Type 1" only guarantees 12W at the load) and that it is compliant with your data standard (if you are diplexing the cable).

That being said, you can certainly spin your own solution. The standard (and its market) have dealt with substantial challenges like supply inrush, cable surge, etc. that might cause you headaches along the way. Good luck either way!

In such a scenario, you would treat each conductor in the cable as a resistor. Since CAT5 cable has 4 twisted pairs, you could dedicate 4 conductors each to power and ground. This is analogous to putting 4 resistors in parallel, so your circuit basically becomes this: 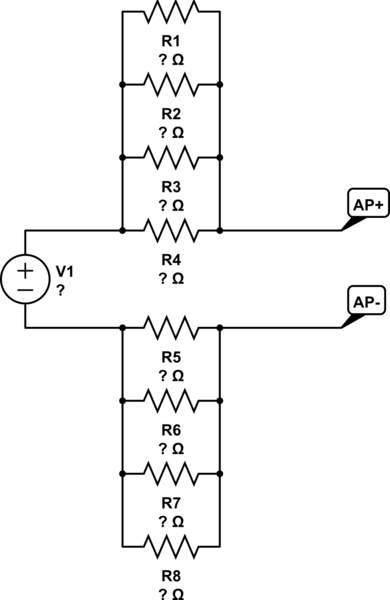 However, one thing you need to consider is that all the power dissipated by the wire turns into heat. When a current enters a junction of four equal resistors, the current is divided equally among them, so (1.5A/4) = 0.375A of current flows through each conductor. The power dissipated by each conductor can then be found using P = I^2R = (0.375)^2(22) = 3.09W. This is quite a bit of power to dissipate in a wire and could heat it up considerably.

24 AWG for 250 meters works out to about 20 Ohms. Using all four pairs should reduce that to approximately 5 Ohms.

So, if you wanted to do this directly, you'd need to start with at least 18.7 volts and 25 watts at the source to meet your requirements at the target.

The losses in the wire depend on the current, not the voltage though. If at all possible, you'd be much better off transmitting higher voltage at lower current. For the obvious example, if you used power from the wall (240 volts) you could use a normal 12 V power supply at the far end.

In short, in this case you don't really need to do much of anything to compensate the wire. Simply for safety, you might want to use an isolation transformer, and probably a fuse/circuit breaker specifically for this circuit. Given the requirements, something like 1/10th or 1/8th amp would be adequate.

Most Cat 5e cable I've seen is rated for around 300 or 350 volts1, so running 240 volts through it shouldn't be a real problem. Most is rated only for indoor use though, so using it outdoors might not work out so well (e.g., insulation might not withstand the UV in sunlight well, and might deteriorate fairly quickly). Ideally, you'd like it to be outdoor rated, but that may not be as inexpensive as what you're currently considering.

On the other hand, as @mkeith pointed out in a comment, carrying a high voltage on a cat 5 cable is sufficiently unexpected that it carries a degree of danger, even when/if the cable itself is rated for that voltage. It's probably safer to reduce the voltage somewhat, and put up with greater loss in the cable (though you might consider some middle ground, where you use a voltage somewhat higher than the 12 volts required by the router, but still lower than the 240 supplied from the socket--perhaps 48 volts, for example).

Not the answer you're looking for? Browse other questions tagged power-supply dc wire distance or ask your own question.

9
Why is there a voltage drop in a twisted pair wires of an UTP cat.5 cable?