Why did spilled coca-cola on a terminal strip cause this odd voltage problem?

I recently repaired a vending machine that had coca-cola spilled on a terminal strip. A 9.5V source from the strip measured correctly on a DMM when there was no load on it but dropped to 2V with its normal load (less than 1 amp). Cleaning the strip of hardened cola fixed the issue. There was corrrosion damage noted after cleaning. Why would the 9.5 volts behave this way? (I know cola is corrosive).

To elaborate on Passerby's answer, my mental model of the situation would look something like this:

The first reading you made from the terminal strip was, "when there was no load". I think you meant that the usual load was not there. Since a circuit was completed when your test probes made contact with the terminals, and current flowed through your DMM, your meter became the load (although an extremely tiny one). 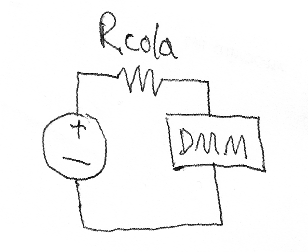 So the resistance of the cola is in series with the resistance of your DMM. And together they are the (tiny) load. DMMs by design, have extremely high input impedances (many tens of MegaOhms, IIRC) so that their impact on the circuit they interact with is negligible. In a series circuit, the larger resistance drops most of the voltage. Taking the value of Rcola given in Houston's answer, makes your DMM's resistance is many millions of times greater than Rcola. That makes the DMM the entire load (virtually), and the measurement you got was the voltage being dropped by itself!

Now when you made another measurement with the usual load attached to the terminal strip (as shown in Houston's schematic), this time the DMM is in parallel with the load. And in a parallel circuit, the smaller resistance drops most of the voltage. This time, your DMM's super high resistance makes it the one to ignore. So you're back to a series circuit: Rcola in series with Rusual, and the measurement of 2 Volts you got was all that was being dropped by the (usual) load. And this time Rcola was greater and so it dropped most of the voltage.

One last thing to note is that the corrosion you noted might not be entirely from the cola. One project I made used two wires to sense the water level in a fountain. Being even more of a novice than I am now, I had current constantly flowing from one wire through the water to the other wire. Seemed fine, everything worked... AT FIRST! But in less than 24 hours, the wires completely disintegrated causing complete circuit failure! I later learned what I had going on was called "electrolytic corrosion" (I really hope I remembered that correctly!). Perhaps some of that corrosion you noticed was from electricity?! I don't know, I'm just taking a wild guess!

Not the answer you're looking for? Browse other questions tagged voltage load terminal corrosion or ask your own question.

3
How should I read the voltage ratings on this terminal strip?
0
How did we count this open circuit voltage?
0
Where does the indicated negative voltage terminal lie on this circuit?
11
Does this circuit have marginal voltage level problem?
0
What's the cause of leaking voltage in this cable?
5
Why is the voltage divider formula used in this circuit to find the terminal voltage?
2
Why did this MOSFET blow up?
1
Why does switching OFF heavy electric loads cause a surge in voltage?