rs232 signal on the scope doesn't add up

I've sampled pre-max232 chip off pin RC6 so it hasn't been inverted yet and is only at about .5 Vp-p.

According to internet sources I should be seeing a Start bit / LSB to MSB / Stop bit.

When the signal is received by PuTTY it comes through fine-no glitches. I just want to understand why I'm seeing what I have and not what I expected. 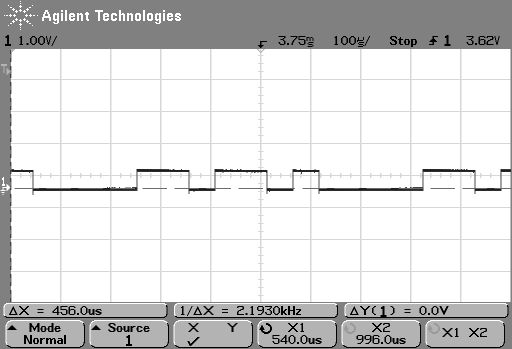 I am not sure what you're seeing on the scope either. But I can tell you some important things that will help you interpret what you see.

Data is transmitted Least Significant Bit first, meaning in reverse order from how you'd normally write it. So an ASCII "0", when transmitted on the wire would be 0000011001, in chronological order and without any idle bits. With idle bits then tack some 1's on the beginning and end of that.

But here's the problem: Your scope picture doesn't match any of this. There is no string of 5 bits that are all 0's or all 1's to key off of. Also, the signal level is about 0.7v which is a bit troubling.

Here is what I would do: Slow down the rate of transmit. Leave it at 19200 baud, but put some time between bytes. Maybe one byte, delay for 0.25 seconds, then another byte, delay, etc. What this will do is allow you to capture a single byte on the o-scope without getting confused by other bytes being transmitted back-to-back. Capture a scope pic of this and add it to your question. Also figure out and explain why the signal level is so low.

Not the answer you're looking for? Browse other questions tagged pic rs232 or ask your own question.

1
RS232 wire color
1
Switching/multiplexing RS232 signal lines
2
How to detect RS232 and USB connectivity?
10
Can we calculate the baud rate of RS232 communication from the TX output signal?
1
Unsure how arduino is interpreting RS232 signal