How to find the frequency of more than one zeroes analytically? 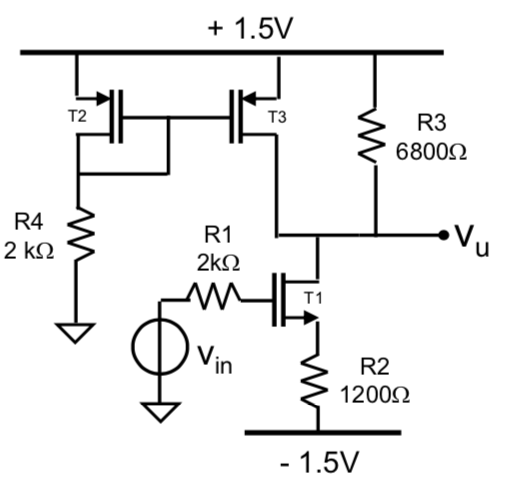 Hello, I have to draw the Bode plot of \$G(s)=\frac{V_u}{V_{in}}\$ and I want to do it without calculating the full transfer function.

I have found the poles at 5.5MHz and 86MHz by a simple visive inspection of the circuit.

I can find the first zero by calculating the frequency at which all the current generated from Vin flows into T1 transistor (93MHz), but I cannot find an easy way to calculate the frequency of the second zero (it should be circa 216MHz).

I know I can calculate it through graphic inspection, but I would like to know if there is an easy analytical method as for poles and the Cgd1 zero.

The fast analytical techniques or FACTs can let you determine zeros by inspection. If it works well with passive circuits, it becomes less obvious with controlled sources as in your schematic in which you replace the transistors by their small-signal model. A zero in a transformed network (a network in which caps are replaced by \$\frac{1}{sC}\$ and inductors by \$sL\$) is a salient point in the entire \$s\$-plane (and not only \$j\omega\$ as in harmonic analysis) where a network in series with the input signal offers an infinite impedance and and/or a branch shunts the signal to ground. See below:

Despite the presence of the excitation, the stimulus propagates in the network but, at some point, cannot reach the output and the response is a null. It is not a short circuit but you think of a virtual ground, like in an op amp. Think of an undamped notch featuring two imaginary zeros then, in the lab, if you excite the circuit exactly at the notch frequency, you read almost zero on the volt-meter. Let's see how it works with the below simple circuit: 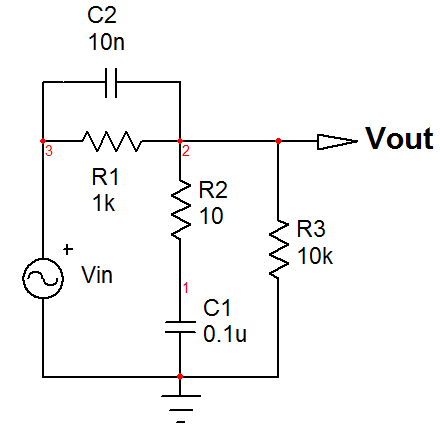 These FACTs are really great to quickly determine transfer functions of passive and active circuits. The nice thing is that the result is in a low-entropy form meaning it is expressed in a clear and ordered form where poles, zeros and gain are immediately identified. You will find a tutorial on the subject here. Just a final tip to let you check if an energy-storing element contributes a zero or not: if you open-circuit \$L\$ or short-circuit \$C\$, does the excitation reach the output? If yes, then you have a zero, if not, no zero. Here, you see that if both \$C_1\$ and \$C_2\$ are shorted, the input stimulus reaches the output and creates a response: there are two zeros in this circuit.

1
Program to make bode plot of transfer function?
3
What exactly is Pole Frequency in a Filter and how does it affect the frequency response?
0
Poles and Zeros of Two Pole Compensation
0
Bode Plots and Electrical Circuits - Zeroes and Poles
1
Find the Zero of a simple circuit
0
Do we analyze real poles the same way you analyze complex conjugate poles?
1
Finding resonant frequency or damping ratio from Bode Plot
4
Identify zeroes of circuit by inspection
1
Bode plot from s-domain singularities
3
What does the value projected on the σ axes mean in s plane?