Can I use them on a continuous duty-cycle like certain relays or are they meant to be used only for certain duration at a time?

I'm worried about burning out the solenoid coils.

The original data sheet seems to be Japanese. 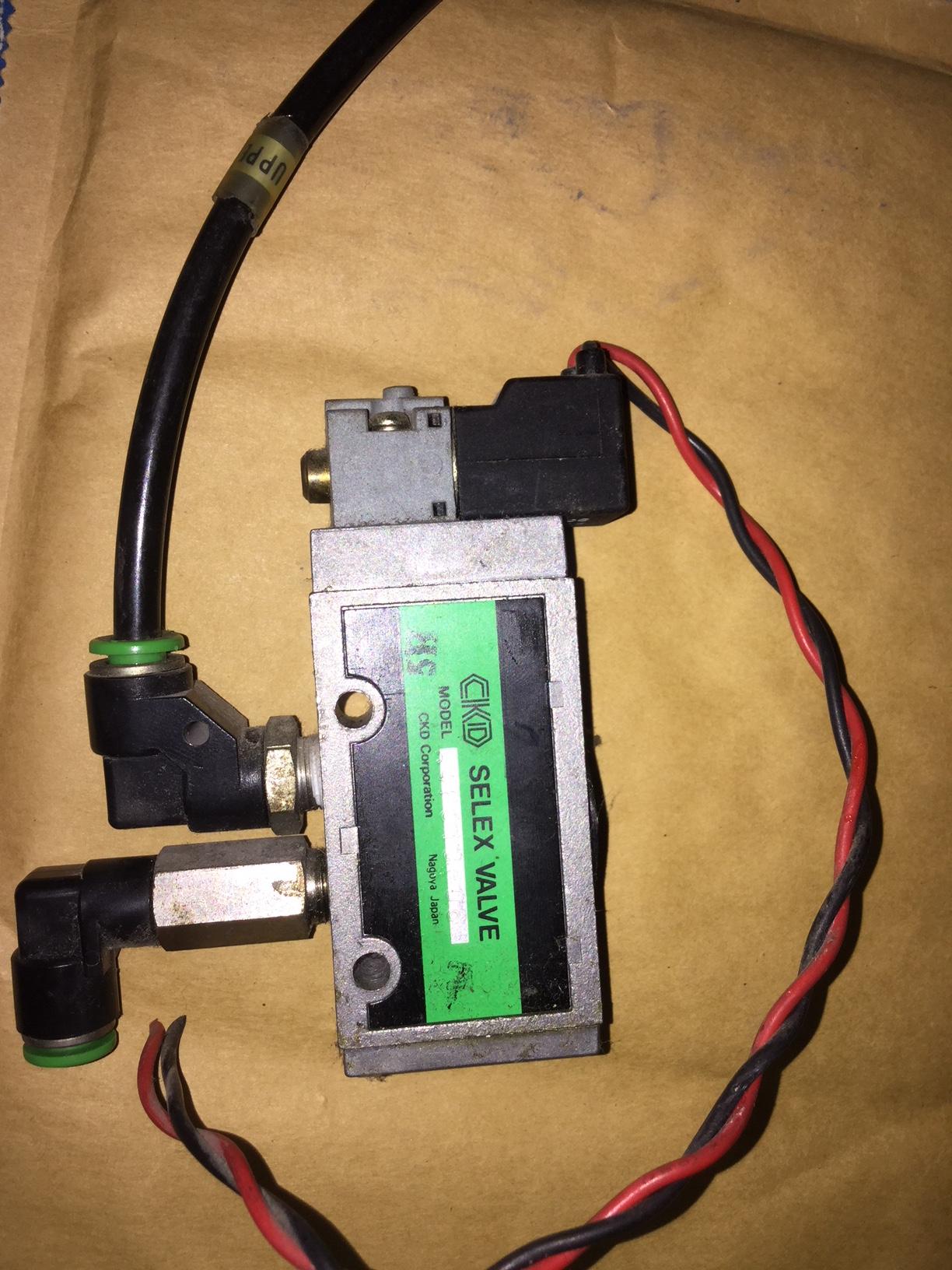 I have one more question which could be slightly off topic. I tried removing the solenoid connection part which were held by two screws. All I could see apart from the two screw holes was small 3 holes. I thought these solenoid valves actually had some "valves" that opened under magnetic field when activated. I was quite surprised when I noticed the inside with the solenoid to just have 3 holes and how does it control. When I tried connecting to a 24V DC I didn't see any visible movement apart from the click. Do you have any idea how it might be working?

The part with the red circle shows the tiny 2 or 3 holes I was talking about. 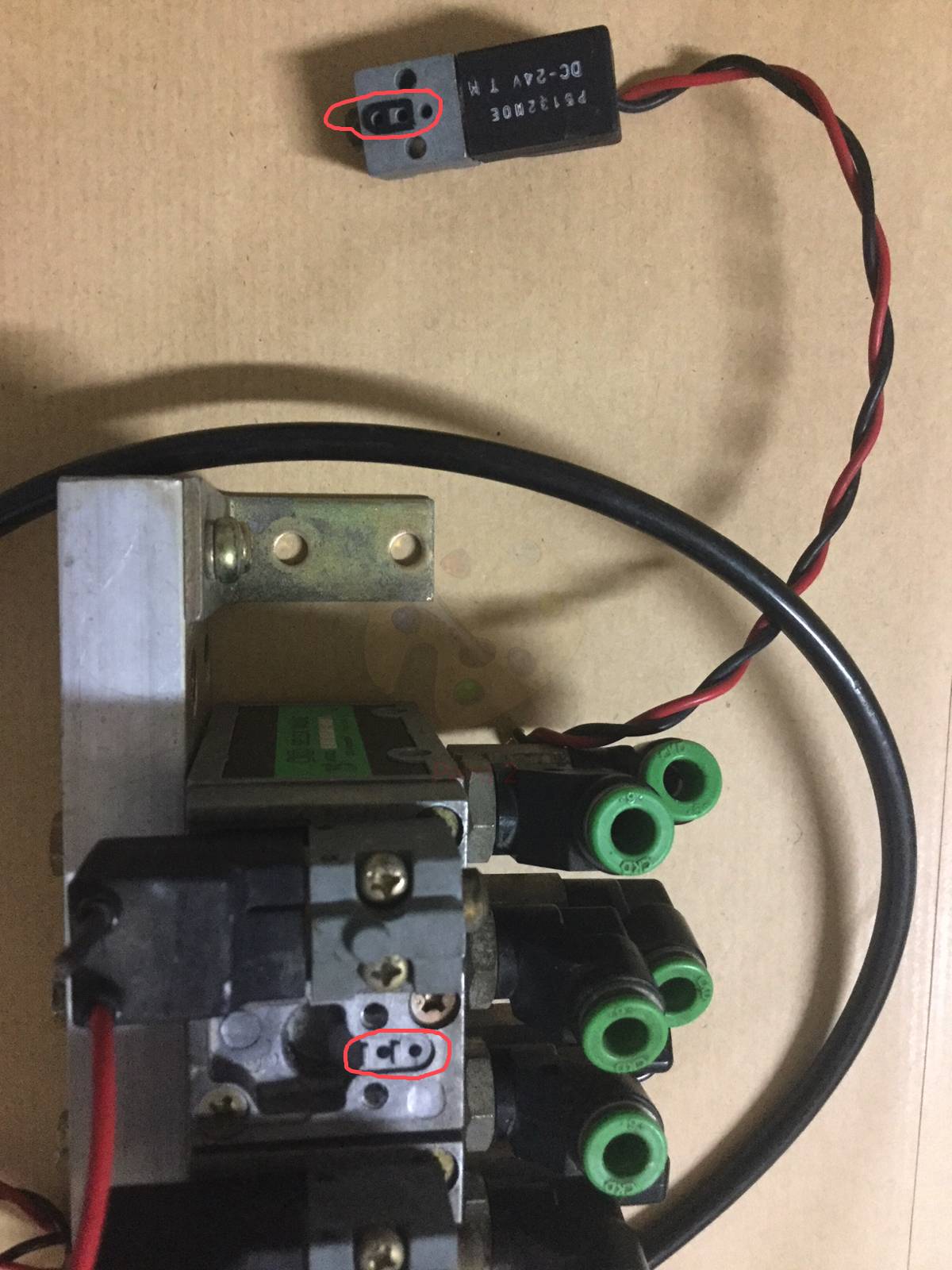 That looks like the same part as the CDK 4F0/1/2/3 series of solenoid valves. 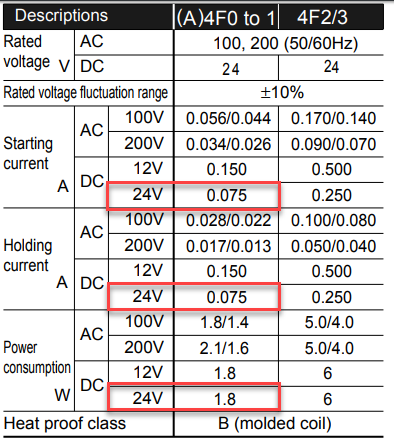 There is no duty cycle limit on the coils listed in the datasheet. It would be very unusual for them not to be continuously rated. Note that they are solenoid - pilot operated rather than direct solenoid so they will be quite low power - 1.8 W according to the data sheet. You should be able to hold your hand on the coil when they've been powered for an hour.

As a result of the above AC powered solenoids (and relays / contactors) have a built-in power saving advantage over DC. However, the very wide adoption of 24 V as the standard industrial control systems supply voltage means that we live with the power penalty.

Just because it came up in the comments ... 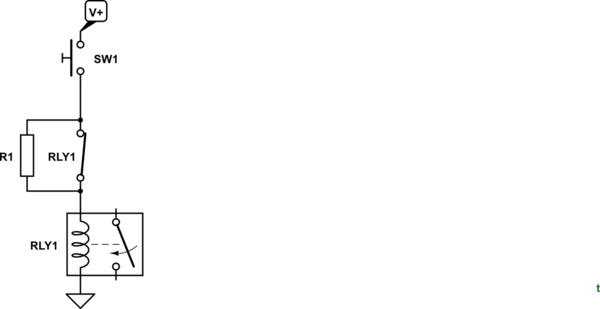 Figure 1. A power-economiser circuit for a DC relay or solenoid. Full voltage is applied to the coil initially through its own normally closed (NC) contact but as it energises the direct connection is broken and the voltage-dropping resistor feed takes over.

I have one more question which could be slightly off topic. I tried removing the solenoid connection part which were held by two screws. All I could see apart from the two screw holes was small 3 holes. I thought these solenoid valves actually had some "valves" that opened under magnetic field when activated. I was quite surprised when I noticed the inside with the solenoid to just have 3 holes and how does it control. When I tried connecting to a 24V DC I didn't see any visible movement apart from the click. Do you have any idea how it might be working?

Figure 3. Annotated for reference with text below.

All that to answer your question: the split between main block and the pilot section in your valve may be a little different to the animation. Most likely the three holes are:

Note that there are many ingenious variations of these valves. Some might just use the spring at (12) and not have pilot air assist. In some the solenoid moves a tiny soft rubber diaphragm to allow air into (10).

Figure 4. The underside of the pilot valve.

(1) and (2) will be the pilot valve pressure supply and drive to the spool. How do we know? Because (3) has no seal gasket and the only place leaks don't matter is on the exhaust so (3) must be the exhaust port (13) on Figure 3.

It really depends on the model.

Some may have an activation current and holding current. The latter type would need to be initially activated with more energy to perform the "move" then held there with less force. That information will be in the spec sheet. I would however be surprised if this solenoid needed such handling. Things like this are usually controlled by simple mechanical switches and relays.

If you do not have a readable sheet but have the unit itself, you can test it with the full load and see if it gets hot.

BTW: A general issue with the holding current units is a power interruption can cause the thing to drop out and, even though the driver is still activated in low current mode, the unit will not return to the activate position. Depending on your application, that may or may not be an issue.

Most will be rated for continuous duty, some might be rated only for intermittent duty. It will tell you on the datasheet.

The limiting factor will be the temperature rise of the coils, not the valve body. You can easily estimate the coil temperature by measuring the resistance of coil when cold, and again later when hot. Copper has a tempco of about 0.4%/C, or 10% for a 25C rise. I would be happy running the coils up to a 50C rise, or a very measurable 20% in coil resistance.

Like relays, I would expect a solenoid valve to be able to hold in at below its pull-in current. If you find it does get too hot in continuous use, then you could experiment to see what lower current will hold it in, and run it just above that, rather than at 24v all the time.

Putting these two factors together, the way to get maximum performance out of a solenoid is typically to drive it with a high current initially, and then switch to a lower current (either by reducing the voltage, or cycling the voltage source on and off fast enough that the solenoid current doesn't go up and down too much).

Assemblies that use solenoids for some purpose (e.g. opening a valve) will typically only need a certain amount of force, and may use solenoids that can sustain the associated level of current indefinitely. If energy efficiency is a concern, it may be practical to drive such assemblies with a high initial current but reduce current once they're retracted. Assemblies where this is practical will often specify a holding current in addition to the activation current. One slight caveat is that some assemblies include a high-current activation coil and a lower-current holding coil, and automatically switch between them using a position-sensing contact. Such assemblies should generally be driven with a steady non-modulated voltage.

When driving solenoids, I typically will use "hit and hold" circuits. This is because most manufacturers will specify their coils to get smoking hot on their surfaces, i.e. near boiling / hot to the touch. Much of the medical equipment that I work on would be impacted negatively by this, and also are run off quality ACDC supplies that don't suffer from dropouts. Supercat and Trevor both made mention of this and it is a valid concern. However, if you're designing a PCB and are interested in dropping a circuit like this down, check the DRV103 from TI:

You can adjust the "hit" duration with a passive, the "hold" duty cycle with another passive, and you also get open circuit and overload indication via a fault pin. Not perfect for every implementation, but if you want feedback on the load from the PC level and reduced operating temp of the solenoid, this is a great way to get it.

Not the answer you're looking for? Browse other questions tagged solenoid-valve or ask your own question.

1
How can i trigger this watering timer manually
0
How does flyback diode decrease the response time of a solenoid valve
0
zener diodes, different voltages, and using a relay to control its opperation....will this work?
2
Why my solenoid valves open only if power is turned on at last?
0
Beginner questions about wiring power for solenoid valve
1
Resistor in series with Solenoid Valve (for voltage reduction)
2
Converting an electrical schematic into a physical panel layout
1
Time relay and solenoid valve