I'm experimenting yet again with the following audio mixing circuit:

On the scope with signal gen as source, everything looks great. When hooked up to the input of a mixer with a laptop as the source, I get the following audio noise (recorded with no audio playing):

The ticking and staticky blips/bloops are coming from the circuit, the slight background hum is not. Is this noise caused by opamp oscillations?? Or what is causing it?

What I've tried: I get the same results plugged into the mixer's unbalanced input or when adding an extra network to balance the output and using the mixer's balanced input. I've tried removing the virtual ground and using a dual +-6V supply, the noise is still there. It seems to be coming from the NE5532 opamps, adding more buffers increases the noise. Initially the diff amps were biased by the virtual ground, and the NE5532's were biased using a voltage divider. Scrapping the voltage divider and connecting everything to virtual ground reduced the noise by about half, but it's still present. The entire setup is on a breadboard, but I've tried gluing an NE5532 on it's back and wiring it that way and the noise is still present.

Update: After trying different scopes and getting some external feedback I was able to see what I'm dealing with at the output that is causing the noise. Here are the scope results: 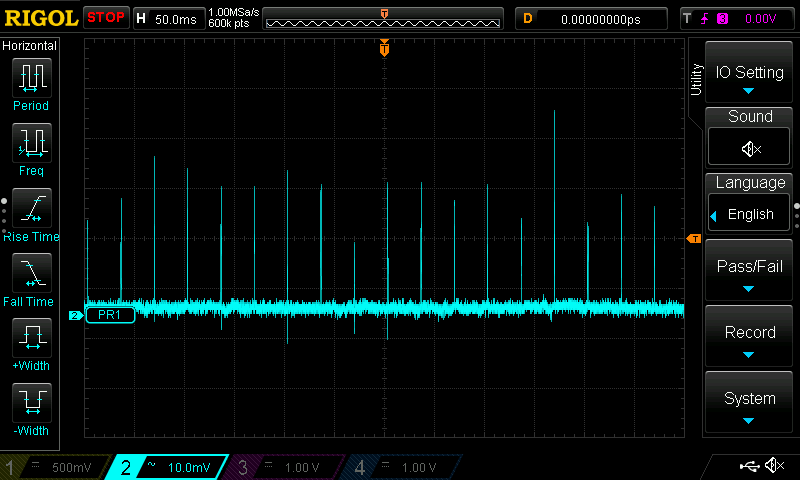 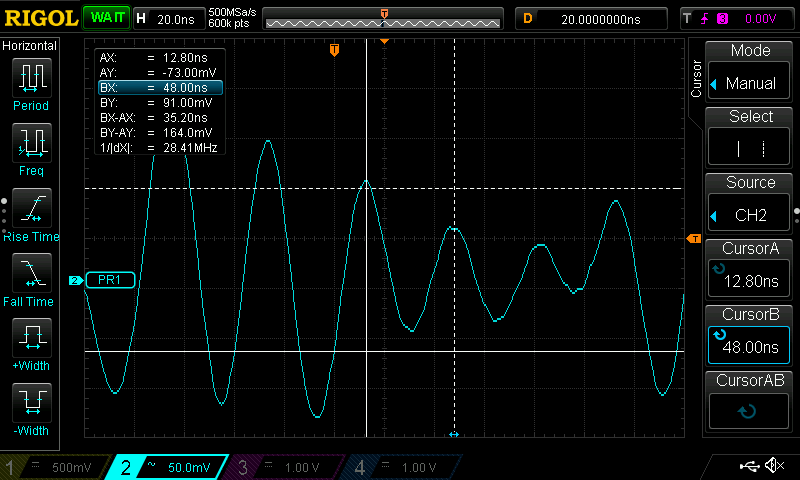 The spikes are pretty much dead on 30Hz (with 60Hz power grid) and zooming in they're a relatively constant frequency of around 27-28MHz, but sometimes measured around 21-22MHz. Any idea what might be the cause? Some type of antenna pick-up?

I've tried unplugging or cutting power to everything in the vicinity and beyond, changing outlets, adding/removing filtering surge protectors, the only thing that seemed to affect it was when the light switch, which switches the adjacent outlet on/off was switched on, the 30Hz peaks increased significantly, whether anything was plugged into that outlet or not. But nothing eliminated the spikes.

Browse other questions tagged audio single-supply-op-amp acoustic-noise or ask your own question.