In a photo diode in which region light should be focused to fall? 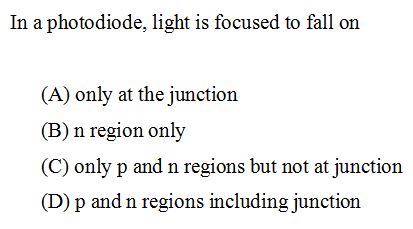 This diode is generally operated in reverse bias condition. The light when focused on the depletion region, electron-hole pairs are formed and flow of electron occurs.

So here its says it should be focused only in deplection region.

apart from this question I want to know the region why it is necessary to do that to point in the particular region?

In reality, the light will fall on the depletion, P, and the N regions. You actually only need the light to shine on the depletion region, but real world variances in manufacturing tolerances (doping level, machining, temperature, etc) mean it would be near impossible to get the aperture to focus only on the depleted region. They probably make it slightly larger to ensure they get a minimum coverage of the depletion region on 100% of their devices. That would matter because the coverage would affect device sensitivity. Light

For your last question. I'm assuming you already have some knowledge of p-n junctions and understood the answer you quoted. It tells you why light focused on the depletion region creates electron flow. I'm interpreting your question as to why we care about the depletion region as opposed to the P or the N.

Why depletion? The depletion region is devoid of majority carriers (from Xp to Xn below). When photons (light) is directed into this region, the energy in that light will increase the likelihood that a electron hole pair is created. Once that happens the electron and the hole will get swept into the electric field and to opposite sides of the region (to get deeper, they become minority carriers because electrons get swept to the P doped region, but don't let this confuse you), this is known as drift current. (Drift is kind of a confusing term because it connotes randomness, which we would associate with diffusion, but in our case drift is caused by E field and is different from diffusion, which happens because of carrier concentration)

Why not P or N? When this happens in the near neutral zones (outside Xp and Xn below). There is no electric field to sweep them up. They also are negligibly affected by the charge concentration because the depletion region is so large and prevents them from diffusing (this is assuming our diode is in steady state). So electron-hole pairs here will not contribute to electron flow. The pair created will eventually just recombine after some average set amount of time. That is why we only care about the light shining in the depletion region. 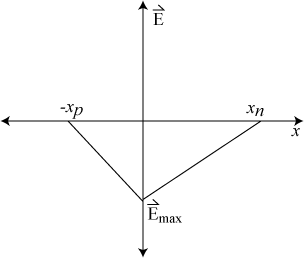 TLDR: Only light in the depletion region matters because only there will it cause drift current. Real world diodes will make light shine on a larger spot that overflows to include P and N only to make sure it covers the whole depletion region.

Good question, It is reverse biased therefore widening the depletion region (could reach almost to the whole of diode).

Also larger surface area of the diode ensures more capture of photons. Hence it is beneficial to let the light fall on whole diode.

Not the answer you're looking for? Browse other questions tagged photodiode phototransistor or ask your own question.