I have an old windmil-type anemometer, something like this: 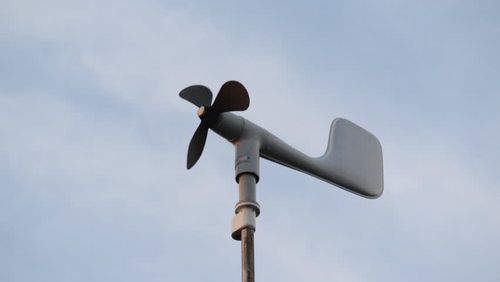 My project is to hook it up with sensors, so I can read and record wind measurements. I need to record orientation of the windmill and rotation rate of the rotor blades. The problem is, that the system has two rotating axes and I cannot run any wiring across any of them. Also, I probably cannot take the thing apart, so any sensors would have to be surface-mounted.

So far, my plan is to use a lot of magnetic switches. For the orientation - I can mount a magnet on a freely rotating part of the windmill and just attach a barrage of switches to the fixed bottom rod. I can run any amount of wiring and power up there.

For the rotation of the blades, magnetic switch seems to be also sufficient, just like in the bike tachometer. The problem is, that I still need to cross one rotation axis with the resulting pulse signal. Few centimeters of wireless transfer only.

I would like to have everything passive, so I don't have to worry about replacing batteries. As I said, I can run any kind of power to the base of the windmill, since it's attached to the building.

My google searches along the lines of "wireless passive switch" failed so far, but I am sure some induction-based element should be able to do the trick. But it seems I don't have the right keywords.

I am not really good in circuit construction, so I prefer a solution out of fewest readily available components possible. Also, it will be surface mounted outdoor system, so it will have to endure a lot of extreme external conditions (typical European temperature/humidity cycles).

I am also open to any other suggestions on what type of sensor to use. I can foresee that the rotation of the blades could be inducting something directly, with the induction detectable at the base wirelessly.

I'd probably start by thinking about Hall effect sensors on the fixed part. A single fixed magnet on the rotating part can then be used to find direction. Or, use a shaft encoder for direction.

Presumably the impeller drives a small permanent magnet generator. You could have this drive a coil that is sensed by another Hall device at the center of rotation.

How was this anemometer supposed to work in the first place? It looks like a manufactured unit. The manufacturer must have provided a way to get the data out. Why can't you use whatever that is?

I once worked on a device that had to get about 90 W of power plus one-way communication across a rotating interface. We used a rotary transformer to transfer the power, and light to send data up the hollow shaft in the middle. These things can be done, but I don't recommend something so complex for a simple anemometer.

Not the answer you're looking for? Browse other questions tagged wireless magnetics inductive rotary position-sensor or ask your own question.