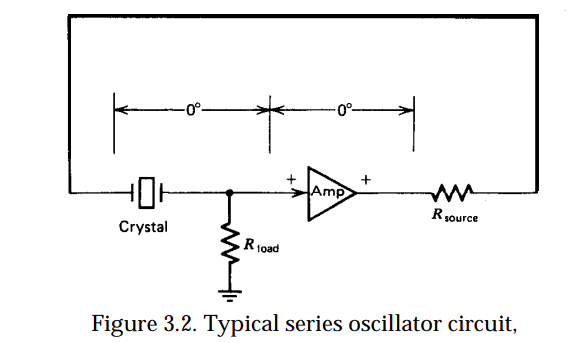 I am trying to understand the sentence "to give the crystal maximum control of the loop gain...". Assuming by maximum control it is saying to maximize the feedback factor, which in series resonance case should be: $$\beta=\frac{R_{load}}{R_{load} + R_{source} + R_s},R_s=ISR$$

Clearly increasing the load resistance is going to increase my loop gain, but the statement is claiming the opposite. So what this sentence meant when it said to give the crystal maximum control of the loop gain I have to reduce the values of my source and load resistances.

Add 47pF capacitors from both ends of the Crystal to GND. You now have a PI filter. Make Rload 100Kohm, to have minimal effect on the crystal behavior. Make Rsource variable, from 10 ohms to 1Kohm.

Now perform analyses. Or run sims, with tiny time steps. And inject a single edge into bottom of the left-most 47pF cap, to kickstart the oscillation

2
What is crystal, resonator, crystal resonator, crystal oscillator?
2
Can I use a series crystal in an parallel crystal optimized oscillator?
13
Why are crystal capacitors considered to be in series?
2
Barkhausen criteria: which is the overall effect if only the magnitude criterion is met?
0
Quartz Crystal and Resonance Frequencies
4
JFET stabilised wien bridge component ratios
1
Calculating Rs Value for 32kHz Pierce-Gate Crystal Oscillator Circuit
0
Resonant wireless charging with really low efficiency, even when coils are in touch
8
Why do MCU crystal oscillators not fry the crystals?