Use of virtual ground to split ground loops?

So I have a "broadband" signal (DC-5MHz) which I'd like to send over coax cable to two other circuits referenced to the same ground. Simply floating the other two circuits is not an option for various reasons. EDIT: sorry I should mention that the circuit shown below is only one signal sent to one receiver. Another similar part of the circuit (not shown) sends a different signal over a different coax cable to the other receiver.

The two receivers are currently single-ended, but could be upgraded to differential in the future. So I thought it might be simple and clever to wire things up so that the driver could be jumpered up to run differential. As you can see, the negative half of the signal can be replaced with a buffered ground to make it "single-ended" when R23 and R21 are removed. It made me a little nervous to short the follower completely, so I put 0.1Ohm output impedance there.

Does a virtual ground really cut ground loops? It seems like the Thevenin equivalent impedance looking "backwards" into the follower would be almost zero anyways? Or perhaps the output impedance of the op-amp is enough to "break" the loop? I am interested in getting rid of pickup and cancelling out the effect of the differences in the references of the three circuits. So in this case mains hum (50Hz) and residual rf (20MHz, 40MHz). EDIT: according to the data sheet the output impedance at 20MHz is about 50ohm. At 50Hz it's below 0.1 Ohm. So if I'm interpreting things correctly, this doesn't seem like a very strong "break" of the ground loop at 50Hz.

Is there a downside to changing the output impedance resistor of the positive signal (R24) to zero and the negative one (R26) to 49.9 in order to cut the loop the "low-tech" way? (series resistance) EDIT: The cable has 50 Ohm characteristic impedance and will be terminated with 50 Ohms. 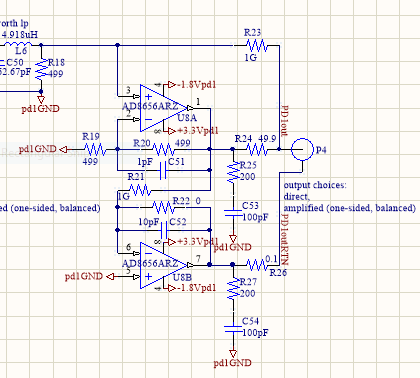 Do you just want more amplitude out of your signal? Why go differential over coax?

What is P4? I'm assuming the shield of whatever coax that is (BNC, SMA) will be exposed to the operator and any equipment. I try to drive any exposed metal to ground, so I would feel a little uneasy about your setup. Can you add another cable to drive the other half of the differential signal? I've seen it done like this in industry. I think you'll continue to fight grounding issues if you stick with this setup.

Not the answer you're looking for? Browse other questions tagged differential ground-loop virtual-ground or ask your own question.