Why won't this PNP Transistor trigger?

The circuit below should be taking a 3.3V signal from an MCU on MCU_LS12 and outputting a 12V high-side signal.

The output is always 12V. On scoping the base to the output transistor is not being pulled to ground "enough" - only going 12V then to 11.5V.

What am I missing? Input signal on LS12 is a 3.3V from an MCU, sending in a 50% square wave for testing. Why is Q6 not dropping Q8s base to ground? What can I change? Is it the divider? 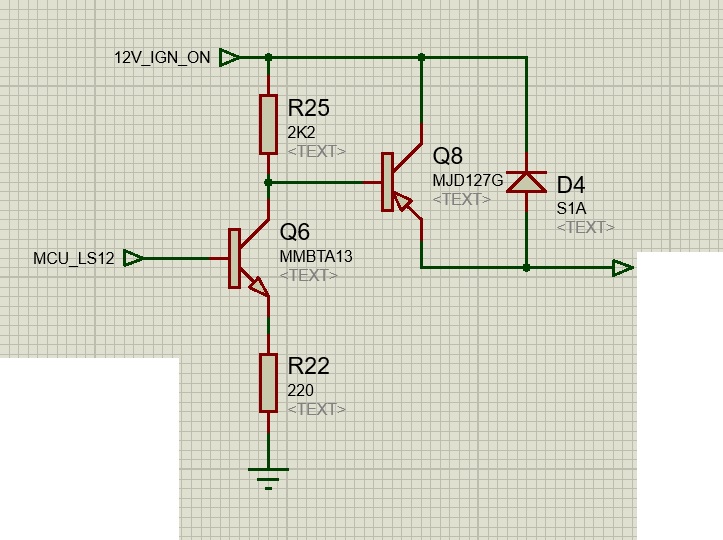 Let's draw out the schematic using the EESE editor (as you should have done): 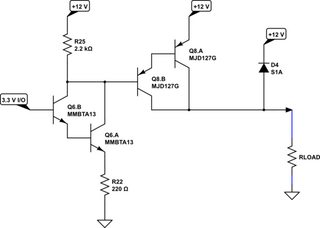 I gather you wired up \$Q_8\$ wrong. As Andy points out, a normal PNP can still act as a PNP transistor if you reversed it. But usually with much worse \$\beta\$ (due to the way things are doped and physically built in a BJT.)

However, what Andy may have missed [assuming I can take you seriously that you are using an MJD127G (datasheet)], then this is a Darlington!! You don't reverse those and expect much. You need to get those arranged correctly! 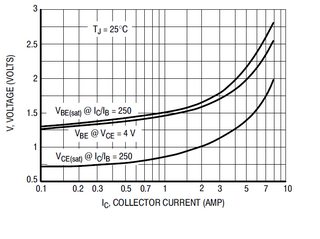 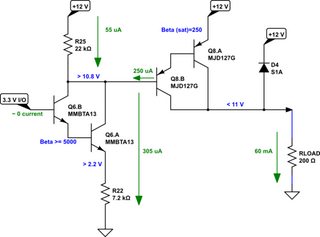 If you increase the load, just follow through with the calculations.

Why are you using Darlingtons?? Ah. Now you mention you might have a load getting upwards of \$3\:\textrm{A}\$. So it makes sense.

Let's redo things for that kind of load: 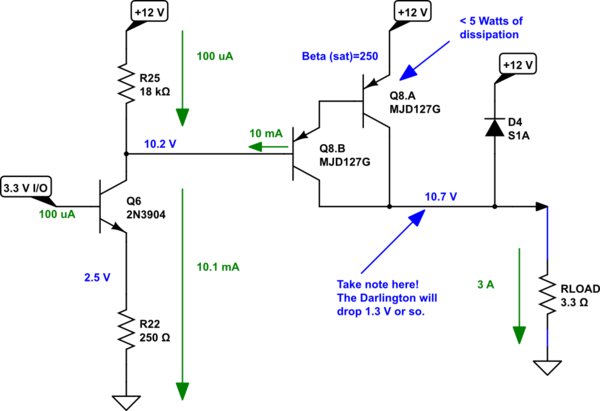 That Darlington will drop more voltage and will now dissipate a fair amount of power. In fact, it will dissipate more than you dare to apply!! Take a look at the thermal resistance and also the maximum operating temperatures! Assuming you don't do something very special on the board itself to dissipate better, you can't dissipate more than about \$1.5\:\textrm{W}\$ on that device.

So while all the numbers work out "semi-okay," you have several problems.

Other than that, seems okay.

You need to deal with dissipation. This is one of those cases where a MOSFET starts to look pretty good.

Get rid of R22 from the emitter and put it in series with Q6 base to set a suitable bias for Q6 to be turned on. With this modified schematic, Q6 acts as a switch and can pull Q8 base very close to ground (not exactly, however: you will have the smallish saturation voltage \$V_{CE(sat)}\$ across CE terminals of Q8, less than 200mV probably).

The problem is that that circuit works as a current source as long as it has voltage headroom towards the 12V rail. In your circuit it forces those 12mA into R25 (2.2kΩ) in parallel with the BE junction of Q8 (assuming you connect Q8 correctly, i.e. you swap C and E in your circuit).

That current splits and flows almost entirely in the forward biased BE junction of Q8. Why? Because if that junction were OFF, the entire 12mA current would flow in R25, and this would require a 26V drop across it, which is not possible with a 12V rail. Hence the BE junction must be ON and as such it will show a ~0.7V drop across it, which will impose a very small current in R25 (\$\frac{0.7V}{2.2k\Omega}\approx 0.31mA << 12mA\$).

A 12mA current in its base is more than enough to saturate the output transistor and make it work as a turned-on switch (which is what you need). However, you won't get its base pulled to ground, as you would expect, because the "driver" transistor Q6 doesn't work like a switch, but as a (switchable) current source.

I'm assuming that the PNP transistor (Q8) is intentionally connected with the emitter and collector swapped in order to achieve a slightly lower Vce when saturated. This technique is used now and then but does have potential problems with reverse emitter-base voltage breakdown so do the math if this is intentional. If not, read on.

The output is always 12V.

Without a load and using a high impedance meter AND given a small leakage current through Q8, the output will tend to be pulled lightly up to 12 volts and this might be what you see.

On scoping the base to the output transistor is not being pulled to ground "enough" - only going 12V then to 11.5V.

The junction between 12 volts and the base is a forward conducting diode and it is likely to only drop between 0.4 volts and 0.7 volts for a moderate base current. This isn't a problem. Base current is set by the 3.3 volts on the base of Q6 - it will "put" about 2.7 volts at Q6's emitter and force a current of about 12 mA to flow through R22 - this current will be largely passed through the base of Q8 (about 10 mA) in order to turn it on.

Other than an output load and possibly wrongly wiring collector and emitter, nothing much.

Comment 3) IMO, it's easiest to work with current calculations when designing BJT switching circuits. Assume the output load draws a maximum current of 100 mA. Let's assume you replace Darlington transistor Q8 with a small-signal PNP BJT (e.g., 2N3906) whose saturation beta is 10 (see the datasheet). For a first approximation calculation we use,

So the current exiting Q8's base must be at least 10 mA. This base current is "programmed" via an appropriately-valued current-limiting resistor R_X connected in series between Q6's collector and Q8's base. (n.b. Eliminate resistors R22 and R25.)

Replace Q6 with an NPN BJT--e.g., a small-signal 2N2222A. The goal now is to saturate Q6 when the microcontroller's digital output pin is programmed to produce a logic HIGH output. Once again, looking at the 2N2222A's datasheet we see the saturation beta is 10. So the required current flowing out of the microcontroller's digital output pin and into Q6's base is

This 1 mA current can be programmed via an appropriately-valued current-limiting resistor R_Y connected in series between the microcontroller's digital output pin and Q6's base:

You need to properly bias the Q6, with a base resistor. Currently it is an emitter follower. Hence emitter is at 3.3V - Vbe = 2.6 V

The second bjt is somehow in saturation

Not the answer you're looking for? Browse other questions tagged transistors bjt biasing or ask your own question.

0
why will my transistor (TIP122) NOT switch?
1
Oscillation won't pass voltage buffer
1
Why this transistor logic as switch is not working?
0
Transistor inversions
2
PNP to NPN Transistor switch
0
Pick transistor to drive a coil from Attiny85 with 2.5 (+/-500) kHz signal (with screenshots)
0
Transistor on shutdown pin
1
Transistor Power Dissipation / Overheating
1
What's wrong with this single-transistor level-shifter?
0
Biasing in this FM transmitter