LTspice "could not open library file" for a third party amplifier

I'm trying to use INA129 in LTspice. So first in TI's page I go to Tools & software and under the model download the file called: INA129 PSpice Model (Rev. B).zip

In this zip file there are files with extension .OLB, .DSN, .opj and .LIB. There is nothing with .cir or .MOD extension.

I changed the INA129.LIB name to INA129.MOD. Then I made an 8-pin symbol for the amplifier and associated the net list to each pin due to the following line in the LIB file:

The file includes the netlist:

And below is how I set the amplifier attributes: 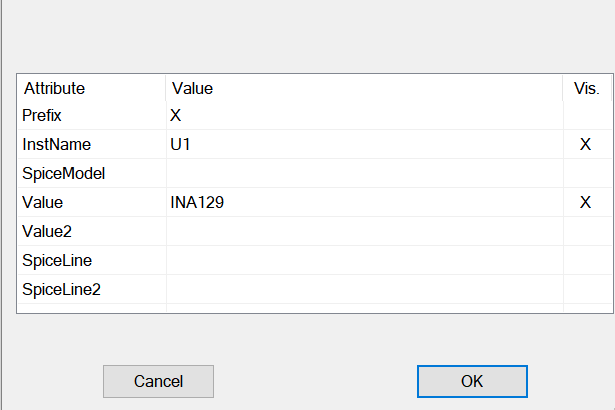 To test the setup I use the following directive and schematic: 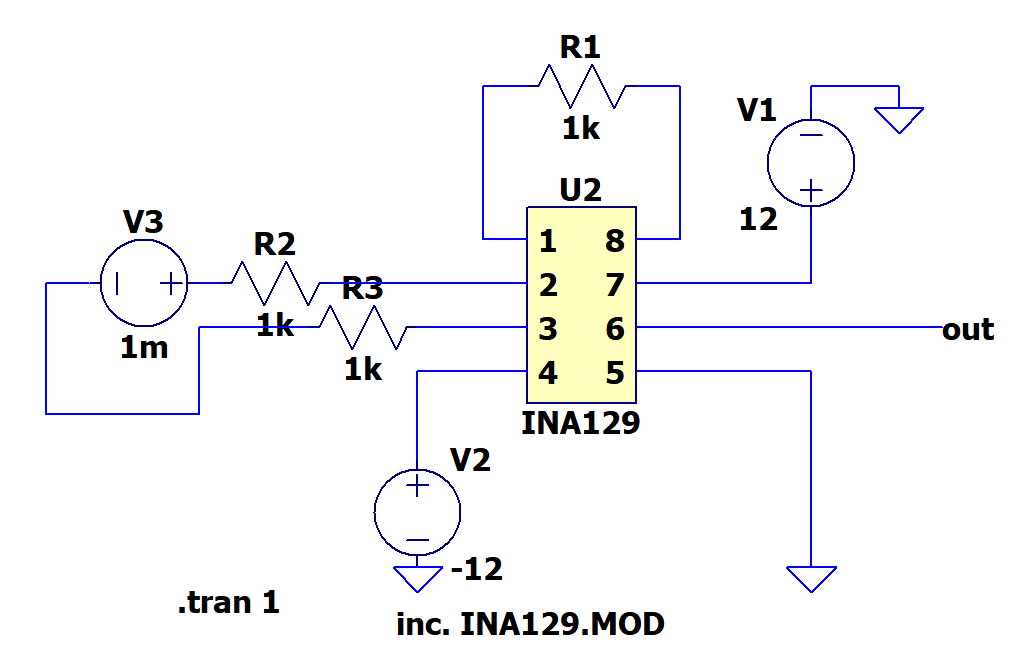 But I keep getting the error:

What could be the issue here? I found this question so far but has nothing to do with my case. 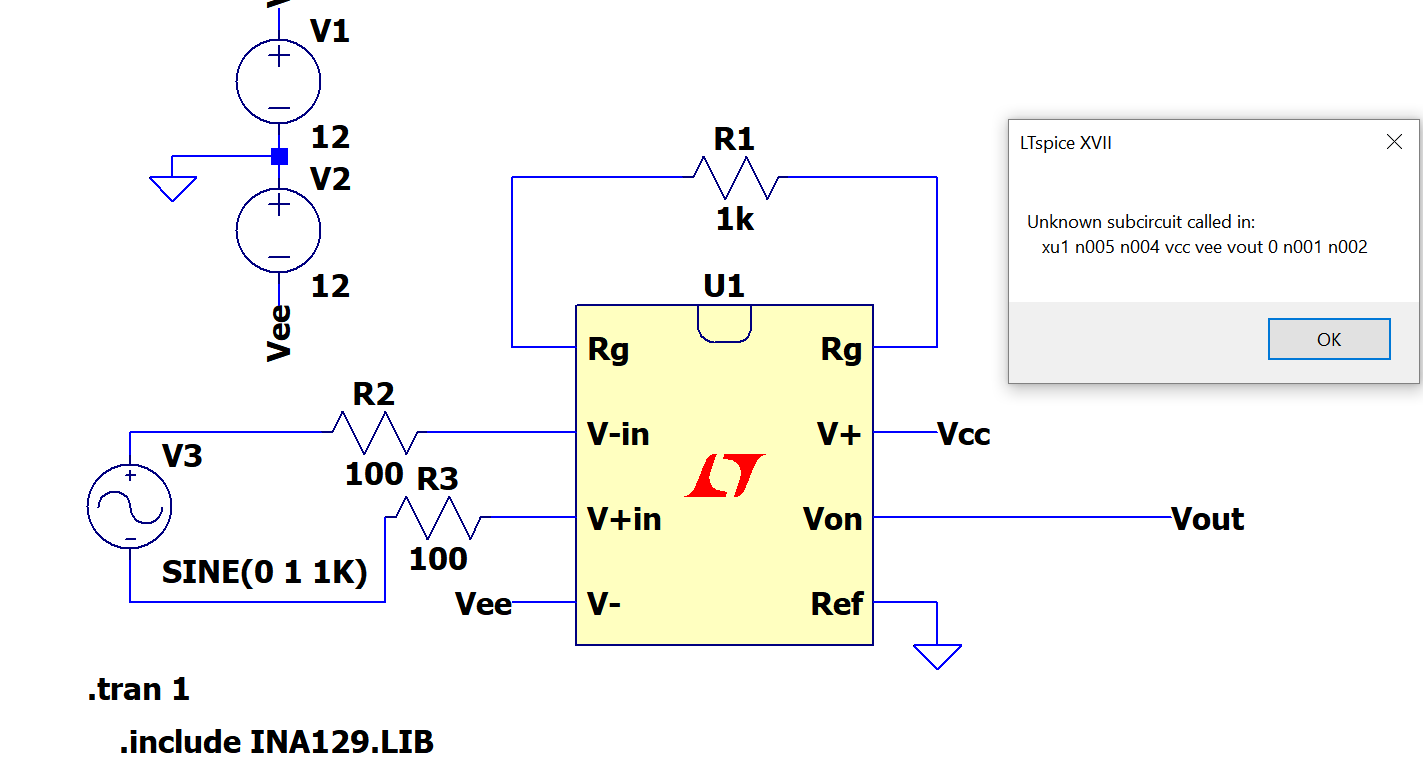 Okay. Lots of problems. This mostly comes from just being slightly ignorant about symbols and libraries and pin assignments in LTSpice. It's actually pretty easy, once someone clues you in.

I won't belabor the rest. You need to go to EACH AND EVERY single pin, verify that the netlist order for that pin matches up with the function shown in the datasheet and the netlist order shown in the .LIB file. There will be some more edits, as you just aren't lucky enough that they will all just match up nicely. So take each one of these carefully, study the datasheet for the meaning of the pin (if you didn't already label everything as I'd recommended before) and then study the .SUBCKT line to find out the netlist order for that pin. Change, as appropriate.

Short breather. Note that what you have done is to modify a default symbol. The .SUBCKT line specifies a bunch of function parameters (so to speak) in some ordering. It's just like a function in C, where the first parameter means one thing and the second parameter means something else, etc. You have to examine that parameter list to see what they mean. If no one placed any comments above, you might have a really hard time figuring that out. So you need to hope that someone did put down a description. LTSpice (any Spice, really) needs to figure out how to "call" this subroutine. To figure that out, it needs to know which wire is passed to which parameter of the .SUBCKT. When you create a symbol, you get to stick down "pads" there which Spice recognizes as "special" and allows wires to be attached to them. These pads get a "netlist" order number tied to them, too, so that when wires are attached to these "pads" then Spice knows which parameter is affected by that wire. Otherwise, Spice would just have to guess. And that would not be so good. So all you are doing here is telling Spice which parameter of the .SUBCKT model gets the value of the wire attached to it. This is called the "netlist order" by LTSpice. It also has a "pin number" which can be displayed, or not. The pin number doesn't really mean anything. It's just a display thing. It does NOT affect how the .SUBCKT is handled.

Now SAVE THIS SYMBOL!!!! I'd recommend that you save it in a handy place (like where it can be found again.) There is a symbol subdirectory for LTSpice. And inside that subdirectory there is another one for opamps. You could stuff it there. Or you could go to the Control Panel and that tab I mentioned and add a directory there for it to find symbols. But you need to save this symbol and probably with an appropriate name that is NOT "DIP8".

Now things will work. I stuck in your parts and it simulates.

Oh, and because you told the symbol about the name of .LIB file and told LTSpice where to find that .LIB file, you will never need a .include on your schematic. LTSpice has all the info it needs without it.

Oh. And if you didn't know it, suppose you have a whole BUNCH of .LIB files for a lot of DIP8 packaged instrumentation amplifiers, each of which have the same pinout? Well. Just paste all those .LIB files into a single, LONG .LIB file and save it with a new, special collection name. Link the ModelFile attribute to that file. Now, when you drop that part onto the schematic, you can right click it to change the SpiceModel there and a long dropdown list of all those .SUBCKT entries will show up, allowing you to pick and choose which of them you want to use today. You can make collections of PUJTs, UJTs, gas discharge tubes, pentode vacuum tubes, or... whatever you want. And LTSpice will just manage the entire lot of the models or subcircuits by name for you. Just as if you'd added an NPN. It's that easy.

For example, here you could also download the .LIB for the INA128, as well, and fold it into the same .LIB file. Arrange things in the new .LIB so that the INA128 .subckt appears before the INA129 .subckt, if you want a sorted list. Then save it.

Not the answer you're looking for? Browse other questions tagged ltspice error or ask your own question.

3
How do I import a spice model into LT spice?

3
LTspice: when I turn a schematic into a subcircuit it behaves differently. Why?
2
Error on importing 3rd party model into LTSpice
4
Help Converting a PSPICE MOSFET .LIB to an LTSPICE .SUB
8
Has LTspice been extended to support the modified-Chan, non-linear hysteretic model for coupled inductors (transformers)
0
Adding models in LT-SPICE
0
Importing Third Party Models in LTSpice
0
LTSpice Third Party MOSFET Error Message