I have an application where a master/transmitter system communicates with a slave/receiver subsystem over an arbitrary distance. The two systems each consists of a microcontroller and some analog and digital circuitry. For communications between the two systems, a UART signal from the transmitter system is sent to a SN75176 differential bus transceiver to convert the UART signal to RS485. Similarly, on the receiver side, the RS485 signal is converted back to UART by another SN75176 for the receiver system's microcontroller to receive data/instructions from the transmitter system. A CAT-5e cable is used for this communication.

A particular requirement for the design is that the two systems are powered from completely separate power sources. Thus, the two systems' power interfaces may have nothing in common with one another (not even a shared ground). A proposed solution for this is to power both SN75176 ICs from the transmitter system's power supply and to optically isolate the final UART output at the receiver side. One of the wires in the CAT-5e cable can be used as a power supply line and another as the ground line for powering the receiver side's SN75176 IC. The idea is that the communications can be made to work while having two independent/isolated power supplies for the two systems. The following two circuit diagrams illustrate the setup.

For the transmitter system:

For the receiver system: 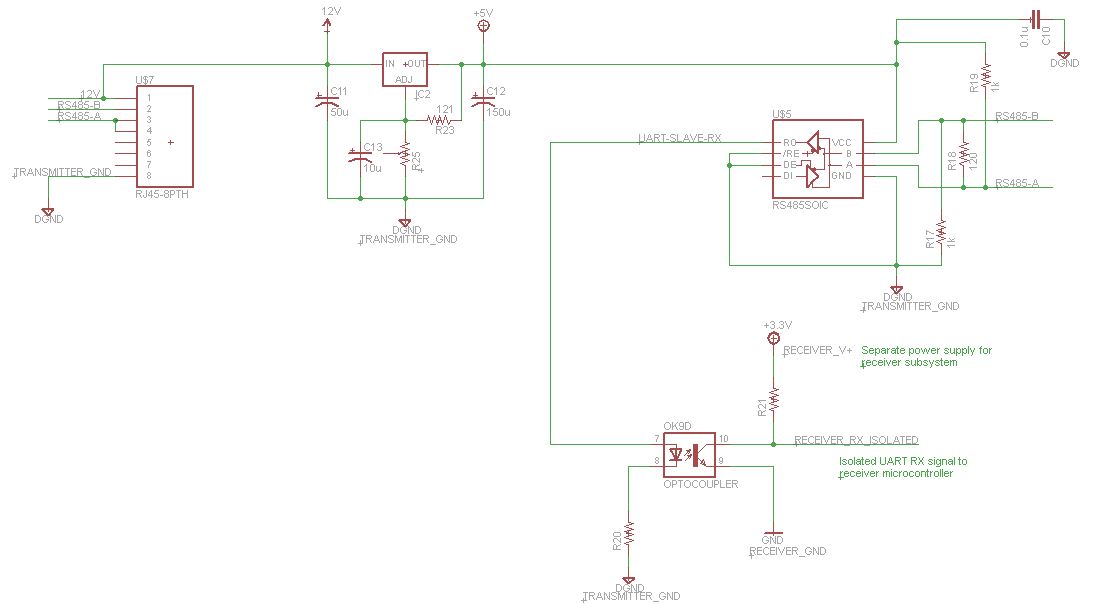 Is there any other method that would be better to use than the prescribed method?

Your concept is feasible, and will work.

A longer cable indeed might drop too much voltage. Simply increasing the voltage will work, but to reduce losses, it might be a better idea to use a switching regulator so that you can also use a lower current. (Power over Ethernet uses 48 V for this reason.)

An alternative to providing power over the cable would be using an isolated DC/DC supply at the receiver. (There are modules like the LTM2881 that integrate the RS-485 transceiver and the isolated power supply.)

"Proper wiring[6]: RS-485 specifies differential transmission, which requires two signal wires in addition to a ground wire (commonly a 24AWG twisted pair) to transmit the signal. The two signal wires carry signals opposite in polarity, and greatly reduce the problems of radiated EMI and EMI pickup.

In the SN75176 datasheet you would not be able to guarantee the common mode signal levels if there was no earth/ground connection between the Rx/Tx pairs. If you are going to span more than a few hundred feet you may also find you earth potential will vary by several volts, so it's best to provide isolation to avoid this.

You may be better using a +/- 20 or 60 mA current loop providing your data transfer (baud rate) rate is modest.

Not the answer you're looking for? Browse other questions tagged microcontroller voltage-regulator uart rs485 or ask your own question.