Why am I cooking MOSFETs?

I've made a very simple MOSFET LED driver that uses the PWM of an Arduino Nano to switch a MOSFET which controls the power for about 16 meters of LED strip.

I am controlling RGB LEDs, so I use three MOSFETs one for each colour and when all 16 meters of LED strip is running I'm drawing about 9.5 amperes.

The MOSFET has a fully on resistance of 0.8 Ω, so my heat should be my I2R loss of

I am running these MOSFETs without a heat sink, and I have left it running all night on a program that just cycles red green blue white non stop and it didn't overheat. I am expecting this circuit to be able to run 16+ hrs per day.

I am using a 12 V powersupply for the LEDs and a 5 V control signal from the Arduino, so it shouldn't be possible for me to exceed the drain gate voltage of 60 V or the gate source voltage of 20 V.

After I was playing with it by my desk in my airconditioned office today I found that I couldn't turn the red channel off as I could earlier in the day. And measuring gate to drain with no power connected I found 400 Ω on the red channel and unmeasurably high resistance on the green and blue channels.

This is the schematic I'm working with. It's the same thing just repeated three times and the 5 V is a PWM signal from the Arduino and the single LED without a resistor is just a stand in for the LED strip which has resistors and a solid setup that I didn't feel I needed to model.

I think it failed after I plugged the Arduino in and out of its pin headers about 50 times though I'm not sure what significance that has as the Arduino still works. 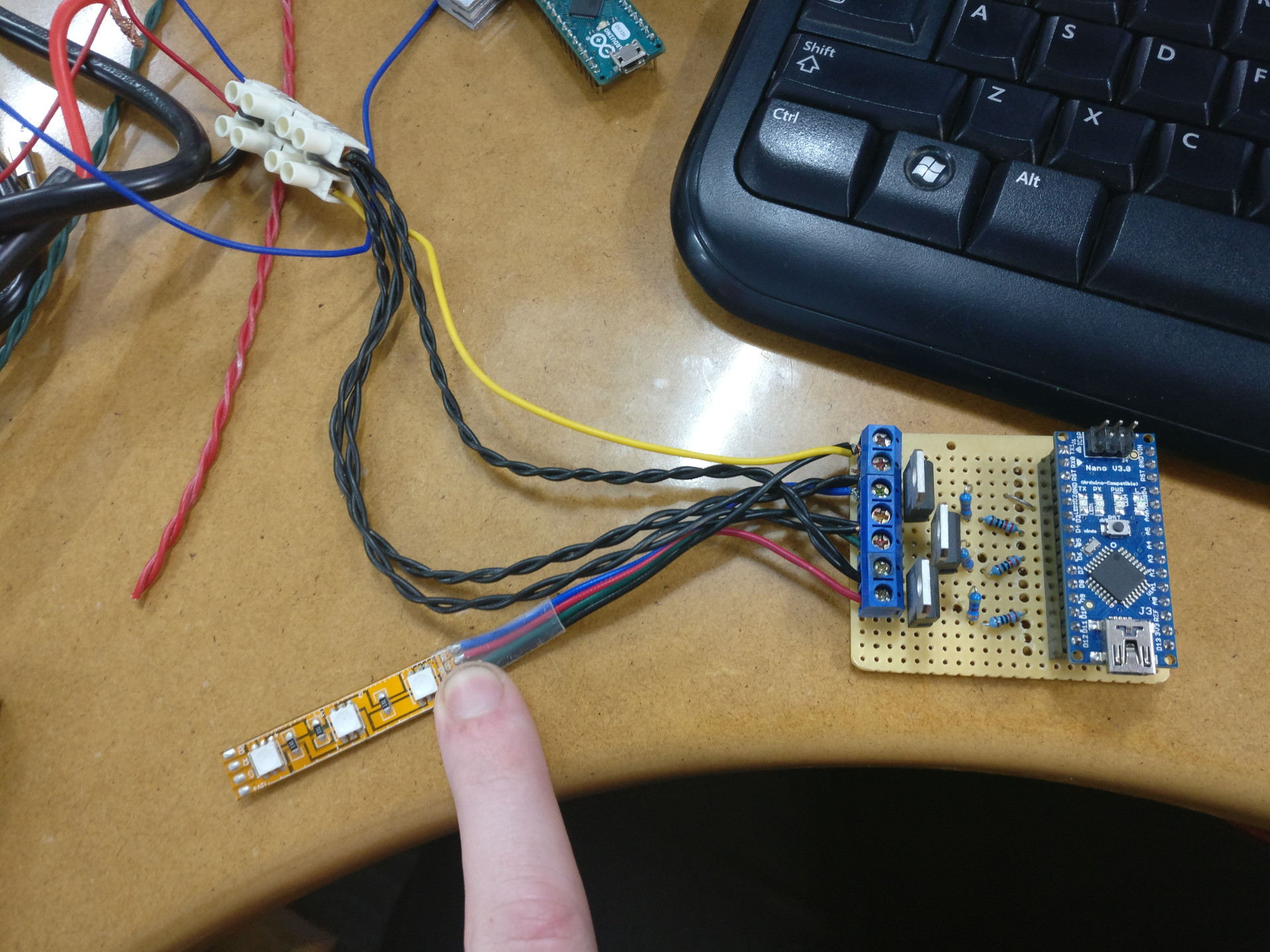 So given that it worked for a few days including one day of high load, my questions:

Your problem is the gate drive voltage. If you look at the datasheet for the STP16NF06, you'll see that the 0.08 Ω Rdson only applies for Vgs = 10 V, and you're driving it with only (a bit under) 5 V, so the resistance is much higher.

ESD could also be a problem: the gates of MOSFETs are very sensitive, and there's no reason that the Arduino (whose microcontroller has ESD protection diodes) would also necessarily be affected.

I'd suggest getting a MOSFET with a low enough threshold voltage to be fully on at 4.5 V. You can even get MOSFETs that incorporate ESD protection on their gate.

The point about the gate voltage is valid, but if the MOSFET is not heating up, I'm not sure that is the actual culprit here.

16 meters of 12 V LED strip driven at several amps is going to have a significant inductance at typical PWM frequencies. This causes voltage spikes at the drain every time the MOSFET turns off. These spikes are short in duration, but the voltage can be many times that of the supply voltage.

The solution to this particular problem is to add a freewheling diode (Schottky) in antiparallel with the LEDs, between +12V and drain, just like you would with an electric motor or other inductive load.

One further thing to check.

This looks like an experimental setup connected to one or more PCs and/or plugpack power supplies.

This often yields an environment that is nowhere directly referenced to earth ground, or referenced to it at some point in the circuit in an uncontrolled manner, especially when a laptop computer with a two-prong-connected power supply is used.

Common "lightweight" plugpack switching power supplies tend to give you output rails that actually have a high-impedance AC potential relative to earth, at half the mains voltage, superimposed on both poles. This usually goes unnoticed because the load is either completely floating (a plastic cased accessory), or has its ground tied firmly to earth ground (a desktop PC), and the impedance is high enough not to hurt you (unless you hold a wire to your tongue, near a vein ... don't, even if it should be safe.).

However, in a test setup like this, it can mean half mains voltage appearing in the wrong place - and 60V or even 120V (actually, a peak voltage of around 170V in the worst case...) can be enough to damage the gate of an unprotected MOSFET if some other electrode is earth ground referenced in any way (eg by a well grounded person touching the drain or source circuit)..

Not the answer you're looking for? Browse other questions tagged arduino mosfet heat esd or ask your own question.

0
Arduino-controlled slot car set - Why are my MOSFETs burning out?
1
Very hot mosfet when powering an led strip
2
Simple ESD protection for MOSFETS
1
Why are my MOSFETs burnt?
2
ESD sensitivity of MOSFET pins
0
Arduino Voltage Divider Wrong Voltage
0
Using one Mosfet to control the gate pin of another Mosfet